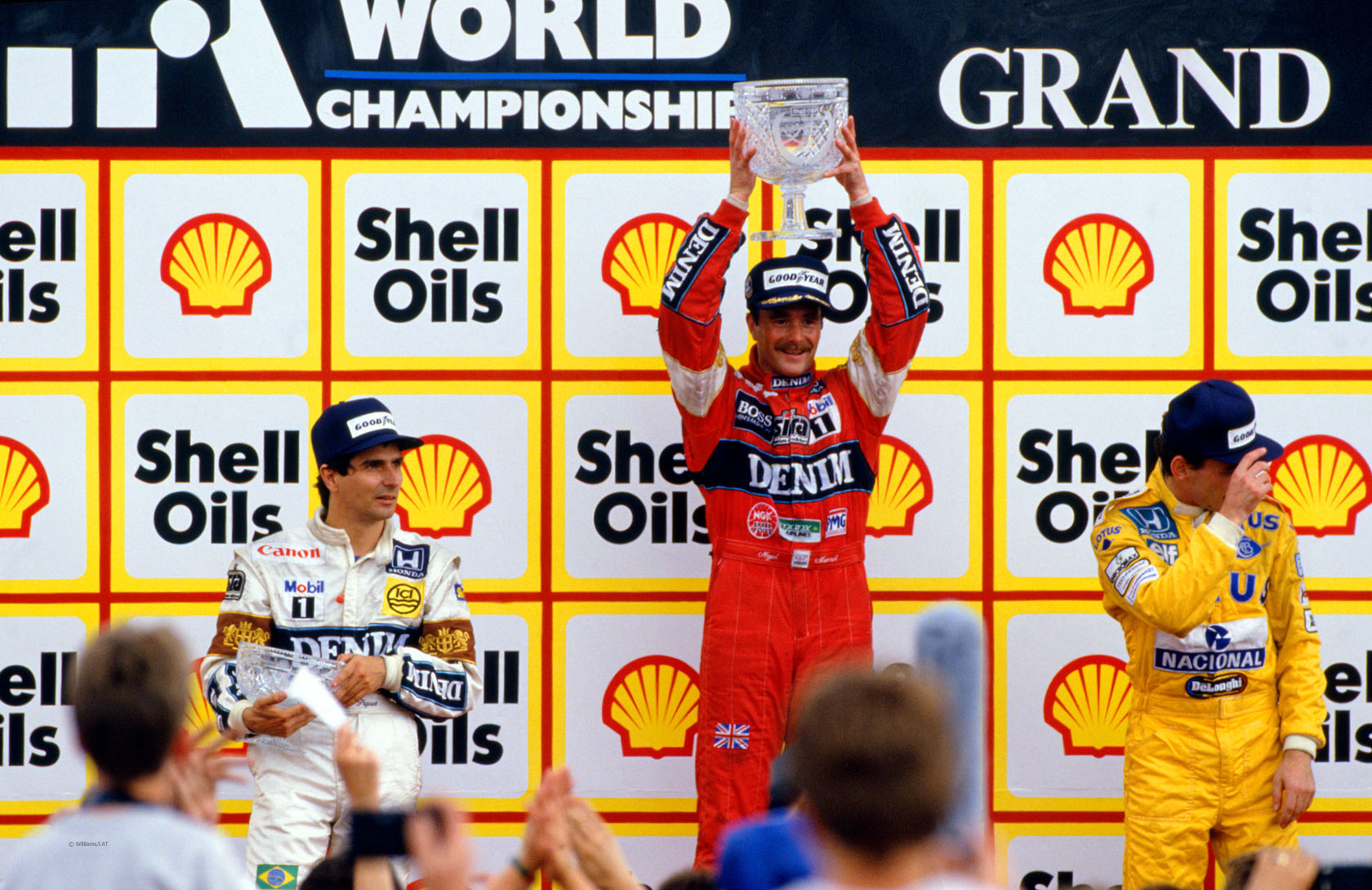 One of Nigel Mansell’s greatest victories came 25 years ago today on home ground at Silverstone.

Mansell overcame a 28-second deficit to catch and pass his team mate and arch-rival Nelson Piquet to win the British Grand Prix.

But the manner of Mansell’s win had consequences for the team. Here’s the story of the race.

The Silverstone weekend ran back-to-back with the French Grand Prix and the events of the previous race were much in everyone’s minds as they arrived at Silverstone. Not least Piquet, who faced the press over a lacklustre performance at Paul Ricard.

While team mate Nigel Mansell romped to victory, Piquet had made a sluggish start then lost more time running wide and later allowed his engine to die during a pit stop. His more vocal critics, such as world champion turned BBC commentator James Hunt, had called for him to retire (see last Thursday’s round-up).

At a press conference ahead of the British race Piquet insisted he was still at his best and pointed out that while he had won two world championships his team mate had lost one.

This was just the latest public salvo between two drivers whose fierce rivalry was conducted both in and out of their Williams-Honda FW11Bs. At Silverstone, Piquet eyed an opportunity to put one over Mansell in front of his adoring home crowd – and avenge his defeat at Brands Hatch 12 months earlier.

Ecclestone vs Silverstone: Round one

There would be no return to Brands Hatch. This was the beginning of a new era for the British Grand Prix – since 1987 it has been held exclusively at Silverstone. The circuit had spent ?é?ú1m on upgrades but, in a taste of things to come, Bernie Ecclestone voiced his unhappiness at the lack of progress in some areas.

Ecclestone complained that Silverstone’s shortfalls made it hard for him to impress the need for high standards on a delegation from Suzuka visiting in preparation for the circuit’s first Grand Prix later that year (25 years on, much the same thing happened last weekend with a group from the Circuit of the Americas).

Among the changes Silverstone had made – at the request of the sport’s governing body – was a new chicane, designed to replace the old Woodcote chicane which had seen a worrying escalation in speeds. A slow left-right allowed the cars to take the old line through Woodcote.

But the onward march of car development in the two years since Silverstone’s last Grand Prix meant the introduction of such a slow corner did little to reduce lap speeds. Piquet set pole position with a lap of 1’07.110, just 2.6kph slower than Keke Rosberg’s record around the old circuit when he averaged of over 160mph.

A scare for Senna Mansell spun at the new chicane trying to better Piquet’s time, and recovered with a quick doughnut to the delight of the crowd. He had to settle for second, just seven-hundredths of a second off his team mate.

Ayrton Senna was third, over a second down on Piquet. Senna went into the race weekend leading the world championship by one point over Alain Prost.

Lotus’s active suspension system had helped Senna win on the slow, bumpy Monaco and Detroit street circuits – the latter remains Lotus’s most recent victory. But the extra weight of the system and bulkier aerodynamics of the Lotus 99T were a serious handicap on the quicker circuits. He was a lapped third at Paul Ricard.

He suffered a fright during practice when a piece of metal shed by a car – believed to have been Christian Danner’s Zakspeed 871 – flew at him, gouging a deep chunk into his front wing. There was considerable relief the debris hadn’t hit Senna’s helmet.

A full field of 26 cars entered the race but Piercarlo Ghinzani was excluded from the meeting after committing two serious breaches. First his mechanics attended to his car out on the circuit, refuelling it and getting him started again after stopping.

Then when the session came to an end Ghinzani failed to heed the chequered flag and completed an extra tour. He was thrown out of the meeting leaving Rene Arnoux as the only Ligier representative.

Frank Williams had one final piece of advice for Mansell which he gave on the team radio before the race begin: “I’ve only got two words to say, Nigel. And they are: brain power”.

Williams must have wondered whether his words had any effect as he watched Mansell lurch towards Piquet at the start. Piquet edged further to the right and neither saw the fast-starting Prost coming by on the left until it was too late.

It was to no avail for the McLaren driver. Honda power blasted Piquet back ahead by Maggotts and as they hit the Hangar straight Mansell took Prost too. And that was the last Williams’ rivals saw of them.

Mansell gave chase of Piquet but his team mate’s car was better set-up for the opening phase of the race on heavy fuel. Piquet had recently switched to a longer-wheelbase version of the FW11B and was revelling in the improved balance.

Mansell was less pleased with his car’s handling after lap 12 when a balancing weight came off one of his wheels. He pressed on but by lap 25 he was 4.5 seconds behind Piquet and the vibration was beginning to affect his vision.

Williams’ rivals drop back and drop out

Behind the dominant Williams pair the rest of the field were spreading out. Prost was 12 seconds behind and Senna a further 15 seconds back.

Gerhard Berger had spun out in his Ferrari after just seven laps. But unreliability accounted for many of the others, including Stefan Johansson’s McLaren. Andrea de Cesaris leapt from his Brabham with a major BMW turbo fire for the second race running.

Prost had briefly been passed by Senna, before the Lotus driver became fixated on his Honda’s fuel consumption which was giving him worrying figures. Senna got back ahead when Prost pitted but the McLaren driver joined his team mate in retirement 12 laps from home with clutch and electrical problems.

The Benetton drivers were also concerned by their fuel consumption – mistakenly, as it turned out – allowing Derek Warwick to pass the pair of them.

The chase is on As with so many races today, the outcome hinged on tyre strategy. When Mansell arrived on pit road on lap 35 he had no choice to make about compound: Goodyear’s monopoly on F1 tyre supplier meant they only brought one type of tyre to most races, including Silverstone.

Nor were pit stops as exhaustively rehearsed as they are today. There was no lightning sub-three second stop for Mansell – he was stationary for almost ten seconds while his wheels were swapped.

After he returned to the track his deficit to Piquet had swelled to 28 seconds with 29 laps remaining. His hope was that fresher tyres would help him recover the deficit. Piquet had tried a similar thing at Paul Ricard, but 16 laps hadn’t been enough for him to claw back his 25-second deficit – he fell short by 7.7s.

At first it seemed as though Mansell’s gamble would not pay off either. Piquet matched his pace early on, turning the fastest lap on the 40th tour. Whereas today he would probably have ‘pitted to cover’ as a matter of course, in these early days of tyre strategy with slower and less reliable pit stops it was not unreasonable for him to stay out.

But Mansell, willed on by the crowd, now began one of his famed ‘charges’. Time after time the lap record fell. With ten laps to go the pair were separated by 7.6 seconds.

Mansell had run less wing on his car than Piquet, giving him better straight-line speed and fuel consumption. The latter perhaps played a role in his decision to pay little heed to his fuel gauge, which was giving increasingly alarming readings.

In the days before blue flags commanded backmarkers to dive out of the way immediately, both drivers were taking huge risks in traffic. Mansell in particular was diving up the inside of cars without waiting to see if they would pull off-line for him. The crowd tingled with tension as the laps ticked by.

As they began the 63rd lap of 65 Mansell was less than a second behind Piquet and his fuel readout was in negative figures. But he wasn’t looking at it. As they blasted out of Chapel his gaze was firmly fixed on the car ahead growing ever larger in front of him.

Crossing the track as they approached Stowe, Piquet kept watching his mirrors for Mansell to move down the inside. Suddenly, Mansell lunged to the left. Was he really trying to pass on the outside? Piquet instinctively moved to cover him.

At the same time, Mansell dodged back to the right. It was a classic dummy move and in the split-second it took Piquet to realise what was happening, the other Williams was alongside him. Piquet squeezed Mansell desperately but stopped short of hitting his team mate. The crowd erupted with joy.

Those watching by the new chicane got a fright as the new leader arrived slightly too quickly for the corner and almost didn’t make it. But Mansell scrambled through and was on his way to victory.

His Williams did run out of fuel – but not before he had crossed the line to win his third consecutive home race. The crowd flooded onto the circuit and Mansell had to be whisked back to the paddock in a recovery vehicle.

But not before one final piece of theatre: As they reached Stowe he asked the driver to pull over. Mansell got out and kissed the tarmac where he had put one over Piquet.

Honda achieved a one-two-three-four finish, but Senna and team mate Saturo Nakajima were one and two laps behind respectively.

Future BRDC President Derek Warwick was fifth ahead of Teo Fabi’s Benetton. Thierry Boutsen in the other Benetton was the only other turbo-powered finisher.

Jonathan Palmer’s Tyrrell was the highest-placed ‘atmospheric’ runner giving him a victory in the Jim Clark Cup, a class for non-turbo-powered drivers which only ran in 1987. Palmer went on to win the category.

Piquet makes up his mind

Senna retained a one-point lead in the drivers’ championship over Piquet and Mansell. Piquet trailled Mansell in both of the next races but on each occasion Mansell’s car failed and Piquet won.

But Piquet was unimpressed at Williams’ failure to protect him from Mansell’s charge at Silverstone by issuing team orders.

Since joining Williams the season before Piquet felt, with some justification, that the team had failed to give him the number one treatment he believed he was entitled to.

In the weeks that followed Piquet made arrangements to leave the team and join Lotus in 1988, who would retain Honda engines, while Williams would lose theirs to McLaren. Amid the euphoric scenes at Silverstone, the seeds of Williams’ downfall had been sown.

13 comments on “Today in 1987: Mansell defeats Piquet at Silverstone”