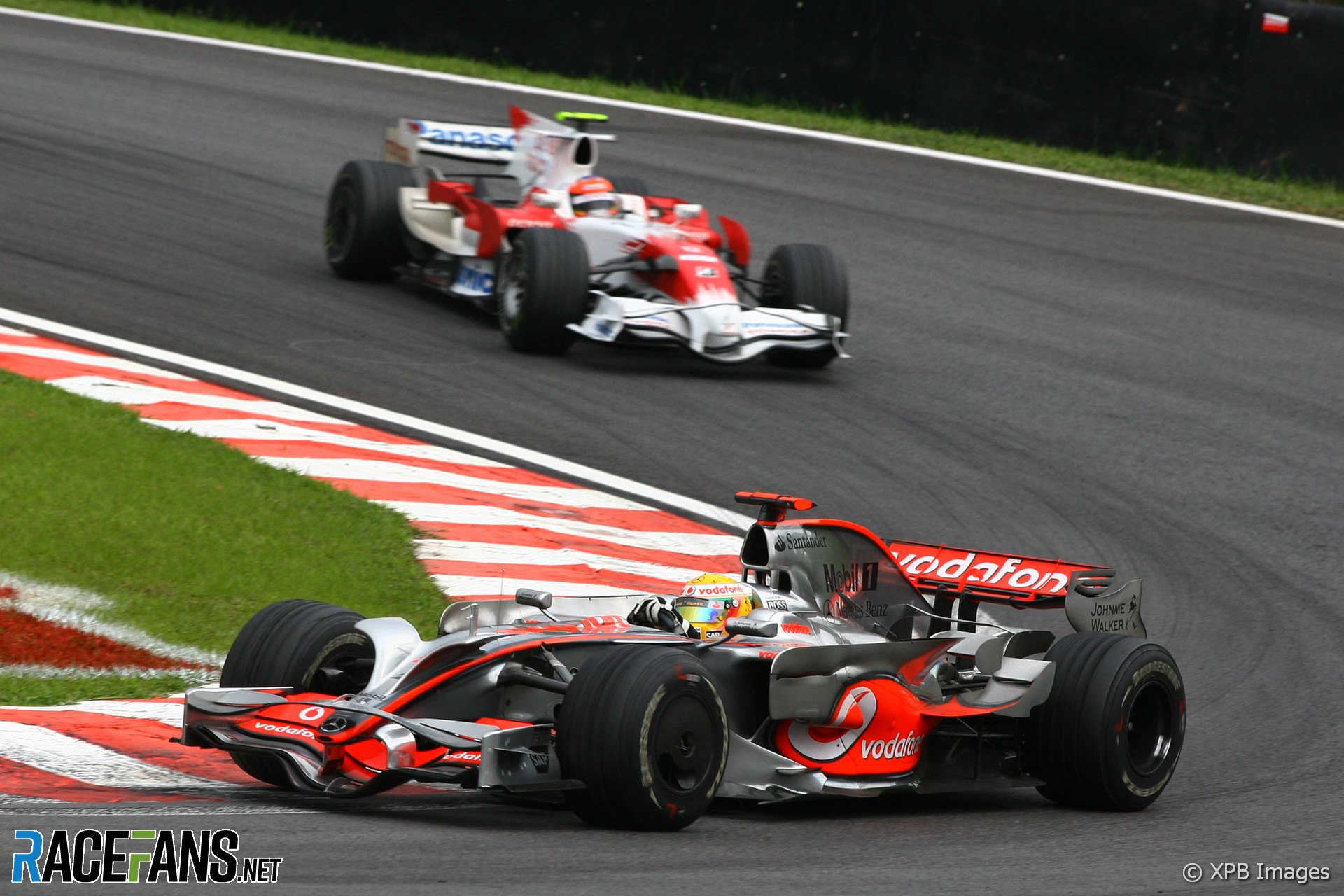 In the round-up: Lewis Hamilton says there is no comparison between the stunning circumstances of his 2008 championship success and controversial defeat last year.

‘Someone made a decision’ to manipulate 2021 finale – Hamilton

Ahead of Formula 1’s return to Yas Marina this weekend, where the championship was decided in deeply contentious circumstances a year ago, Hamilton made it clear he believes the title was taken away from him in 2021.

Speaking to Timo Glock in a feature for Sky on the 2008 championship decider, Hamilton said the dramatic turn of events in that race “was different [to 2021] because this one wasn’t manipulated by anybody – someone made a decision for that result to be the way it was, basically.”

Hamilton said there were “similarities” to “the pain of losing in 2007” and his fear during the final laps of the 2008 race that the championship had slipped through his fingers again. He clinched that title after passing Glock, who had lost grip as he was still running on dry weather tyres in wet conditions, at the final corner.

Following the finale Glock received abuse from some who claimed he had deliberately slowed to let Hamilton pass him. The now seven-times champion told his former rival: “I’m sorry at the time that I didn’t understand what was going on for you in your world.

“I was very young, I’m sorry that I wasn’t able to support you in that time. If that was today I know I could be there and support you. But anyways, you’ve dealt with it amazing.”

Ferrari Driver Academy member Oliver Bearman, who missed out on the Formula 3 title by just seven points this year, will move up to Formula 2 next season. Bearman, who won Formula 4 titles in Italy and Germany last year, will remain with his Prema team as he steps up a category.

'Analysts at one of world's three main debt rating agencies say a failure to return to China next year risks scuppering F1’s ability to pay down $2.9bn (£2.5bn) in loans, debt that is a legacy of motor racing mogul Bernie Ecclestone’s sale of the franchise six years ago.'

How F1’s most thrilling driver took over the sport (GP)

"Verstappen ultimately passed (his road driving test) but nearly received a fatal infraction when he failed to cede the road. 'Yeah, I didn’t give way twice,' he confessed, laughing knowingly."

The report claims Nico Hulkenberg will sign his deal to drive for Haas today.

Bernadette Collins: 'You need not worry about other people’s perception of you and that’s difficult' (Females in Motorsport)

"What I’ve tried to say to people in the past is whatever degree you’re doing, get as much experience as you can. It’s really useful to rule careers out as much as it is to rule them in."

The battle for the 2022 Teams' Championship: MP Motorsport aiming for 2022 sweep at Yas Marina (F2)

'Level on points with a title on the line heading to Yas Marina, where have we heard that before? While there is plenty of scope for drama, MP Motorsport will be hoping that form reverts to the mean and puts the team back on top in what has been a hugely impressive season for the Dutch team.'

'It was the venomousness with which Verstappen delivered his defiance, sending a clear message to the team as to who is boss.'

"Anti-Alcohol testing was temporarily halted during the Covid pandemic, and it has now restarted with an updated system and specially trained Breath Alcohol Technicians (BAT)."

We are deeply saddened to learn our vice-president and former chair, @carscribe Sue Baker, passed away this morning following a long illness. Sue was a pioneer for women in automotive journalism and a former presenter of @BBC_TopGear. A full tribute will be published later. pic.twitter.com/pmEk88joOl

Not much to write home about yesterday but there was for this guy. Congratulations @GeorgeRussell63 on your first win!! Amazing job and well deserved, enjoy it! pic.twitter.com/QduMsQrEvx

Russell will celebrate his first win in style:

Russell: "I was talking to Carlos, we're on the same flight direct to Abu Dhabi. It's a 15-hour flight…"

Russell: "They're free on the plane aren’t they?"

Sainz: "That’s why they’re on me!" pic.twitter.com/cc3jkYmS7J

Hamilton’s early second pit stop on Sunday made sense but was still a disappointment, says @Adrianmorse:

I was a bit disappointed when Mercedes called in Hamilton in reaction to Perez’s pit stop. Their reasoning made sense, of course, to protect track position (which would not have been needed as Perez was unable to keep drivers on soft tyres behind) and that the soft tyre would have been faster throughout.

However, it negated any benefit Hamilton had from going long in the first stint. Moreover, if they had dared to wait, he could have pitted during the safety car. That might have put him ahead of Russell, and even if he had still come out behind, he would have had a few more laps of tyre life, which may have made an attack feasible.

Don’t get me wrong, Russell fully deserved the win this weekend, whereas Hamilton had a poor qualifying and a tangle with Verstappen, but on the other hand, Russell has also benefited from a SC pit stop twice this year compared to his team mate.
@Adrianmorse