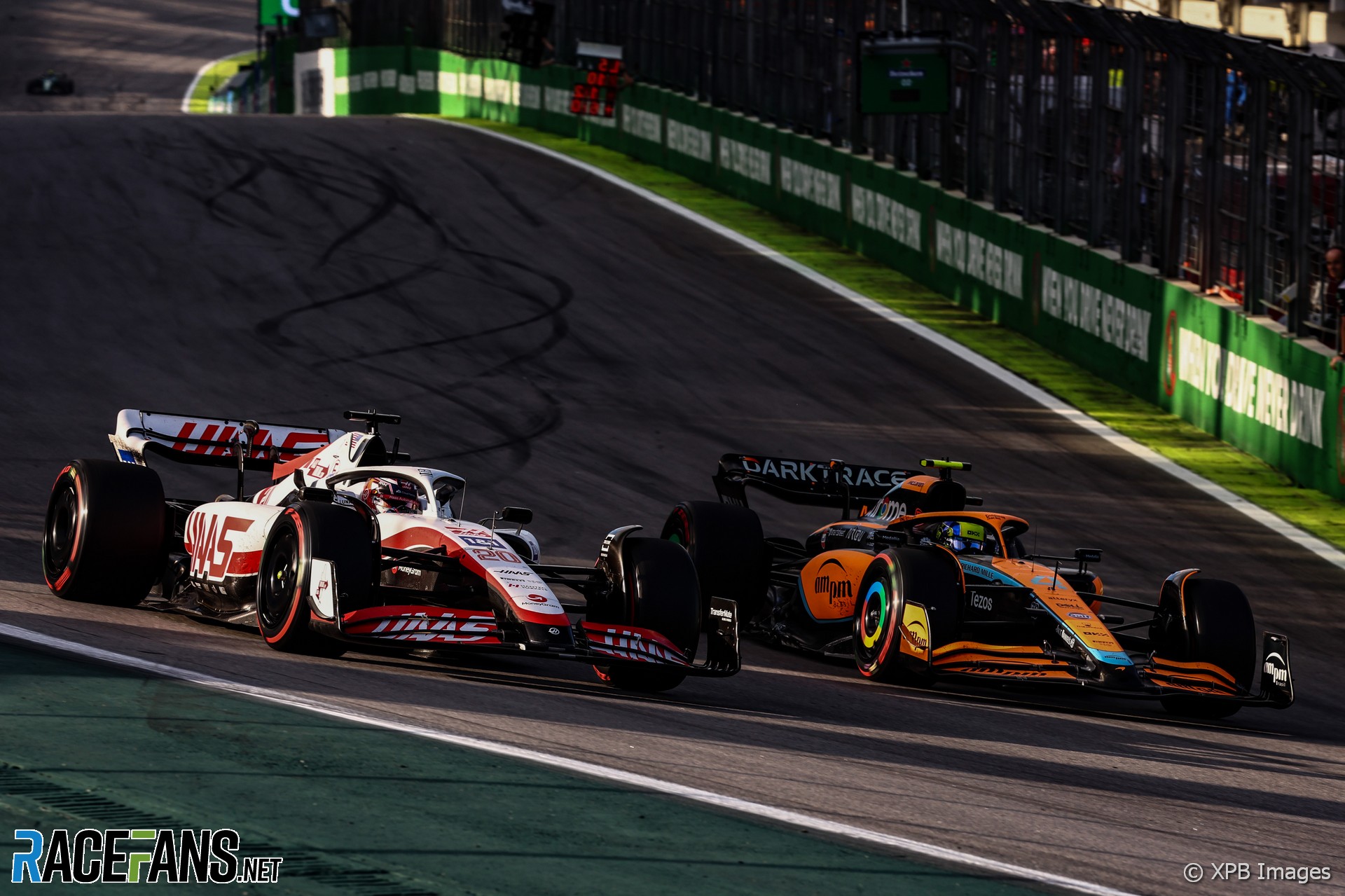 In the round-up: McLaren’s Lando Norris admits he had a “tough” sprint race after recovering from suspected food poisoning prior to the race weekend.

Norris qualified fourth on the grid for the sprint race and fell to seventh by the chequered flag, despite passing Kevin Magnussen with five laps remaining. He will start sixth on the grid after gaining one place with Carlos Sainz Jnr’s five-place grid penalty.

“[It was a] tough day today, but our main objective was to pass Magnussen, and we did that, so I’m happy,” Norris said.

“We didn’t really have a chance to compete against the top three teams and I really wasn’t expecting more than P7. I found it tough today. I’ve been unwell, it was hot and this track is hard work – but we had a good race. We’re in a decent position, and if we can get both cars into the points tomorrow, it could be a really good day for us. We’ll work hard tonight, and see what we can do.”

Williams no longer ‘stuck in the past’ financially – Demaison

Williams technical director Francois-Xavier Demaison says that the team are no longer “stuck in the past” financially after the investment into the team by owners Dorilton.

The team, founded by the late Sir Frank Williams, was bought by the American capital firm in 2020. The team has received significant investment in their facilities to bring it in line with rival teams, Demaison said.

“We’ve been investing a lot of money and effort in the modernisation of the company,” said Demaison. “For many reasons, mostly financial, Williams have been stuck a bit in the past. So that was the priority – invest in the wind tunnel, invest in the factory and invest in people.

The number seven Toyota hypercar team of Sebastian Buemi, Ryo Hirakawa and Brendon Hartley secured the World Endurance Championship title in the hypercar class despite being beaten to victory in the final race of the season in Bahrain.

Toyota team mates Kamui Kobayashi, Mike Conway and Jose Maria Lopez won the eight hour endurance race at the Sakhir circuit, 45 seconds ahead of the number seven crew, but it was not enough to deny Buemi, Hartley and Hirakawa the world title. It was the fourth consecutive world championship for Toyota, with the trio also having won the Le Mans 24 Hours earlier in the season.

Jota claimed the LMP2 championship title with Antonio Felix da Costa, Roberto Gonzalez and Will Stevens. Next year’s WEC will see Ferrari enter in the hypercar category with its new 499P model, while Penske, Jota and Cadillac will also join the series under the LMDH Daytona hypercar regulations.

"The FIA and the teams all agree that the current generation of cars is too long, too wide and too heavy, to the detriment of racing, so there’s a general consensus that, from 2026, the sport needs to go back to smaller, nimbler cars that will allow better wheel-to-wheel racing and facilitate overtaking."

"Red Bull founder Dietrich Mateschitz, who died last month, had recently been paid a record €866 million ($865 million) dividend by the energy drink maker out of the company’s 2021 results.The payout to Austria’s then-richest person was 28% more than the previous year, according to Austria’s corporate register. Mateschitz’s son, Mark, has inherited his 49% stake in the company."

"MGM Resorts is rolling out all the stops for the 2023 Formula One Las Vegas Grand Prix, including a seating area lined up in front of the popular Fountains of Bellagio. Weekend packages start at $2,827 for what may be one of the most picturesque seating areas of the race — a massive grandstand to be constructed in front of the Bellagio on the Strip. Only guests staying at MGM properties will have access to the Bellagio spectator area."

"Motorsport has always seen itself as a testbed for innovation in transport technology, but in this time of transition, some manufacturers don’t seem to be sure which technology they should be developing. This has resulted in some curious decisions, with Audi leaving Formula E and entering Formula 1, while simultaneously aiming to be the most electric brand by 2025 with 20 models (it currently has eight). Mercedes has also quit Formula E, despite winning the most recent season and having a strong and growing range of EVs, most recently joined by the EQS SUV."

Drivers and teams pay tribute to the FIA Volunteers (FIA)

"Watch drivers and teams from different championships say thank you to our great volunteers. Without them, motor sport would not be possible!"

So proud of the progress we've made this season. Lining up alongside LH on the front row tomorrow – let's get it! 👊 pic.twitter.com/Mp1KfViQ8p

It took six attempts, but #F1 finally produced a sprint race worth watching. My preference would still be to have the same format each race weekend, whether that means having a sprint race or not, but I still think they take too much away from what makes a grand prix special.

The sprint race may have been more eventful than many that had come before it, but @Roger-Ayles fears the grand prix will be less exciting as a result…

Anyone that was out of position basically recovered so what would have been a fun opening stint to a grand prix has taken place today meaning the grand prix tomorrow will likely feature a lot less action making it less interesting and exciting than it otherwise would have been if the sprint hadn’t normalised the starting grid.

We saw it at several of these sprints now. Cars out of position after provisional qualifying recover those places in the sprint so it always end up being racing action taken away from the grand prix.
Roger Ayles