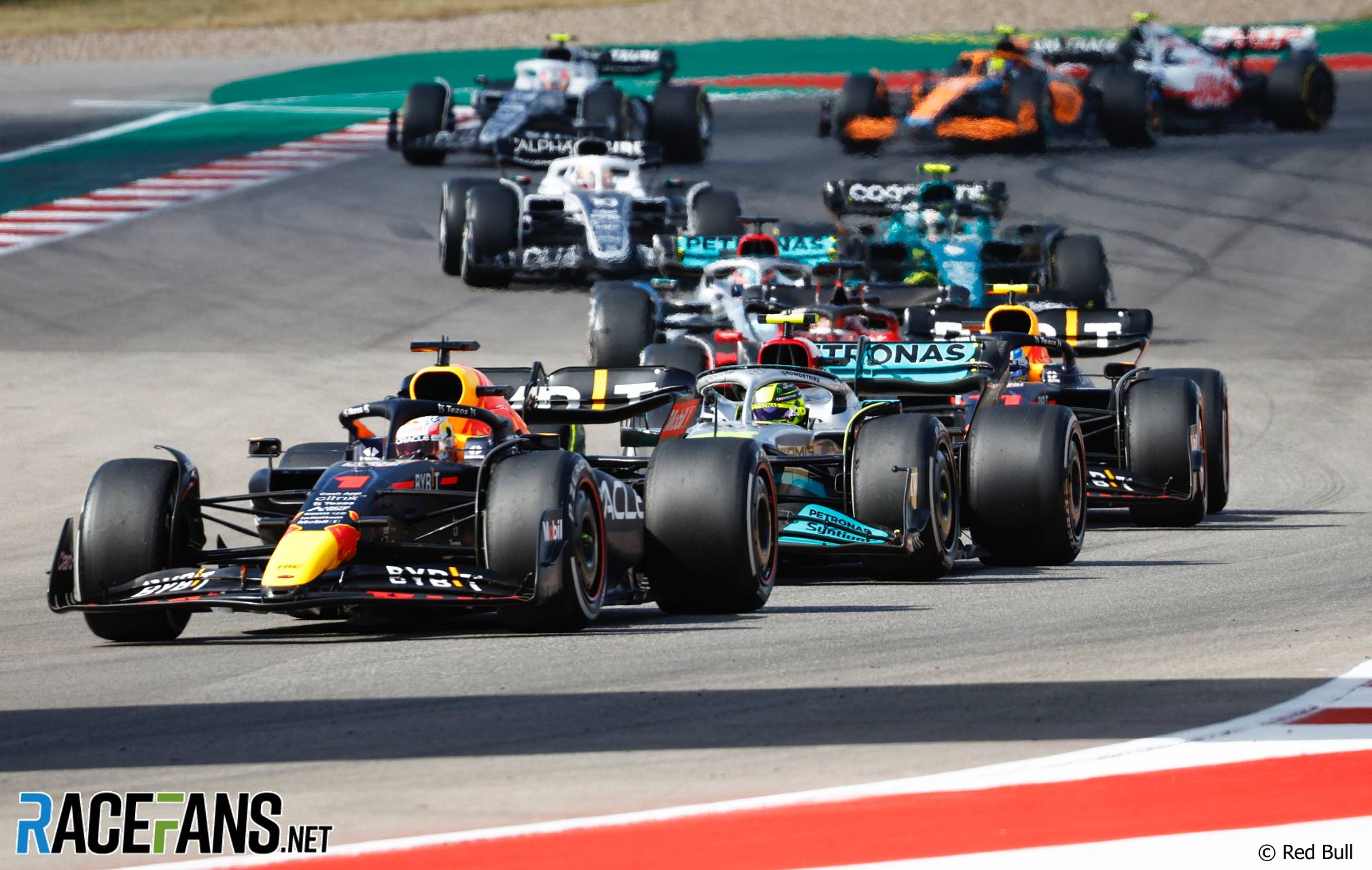 The newly-crowned two-times champion had led from the start of the race before falling behind Hamilton when a wheel stuck during a pit stop. On returning to the track he passed Charles Leclerc and then caught and passed Hamilton in the closing laps to win and secure Red Bull their first constructors’ championship since 2013. Leclerc completed the podium in third.

When the race started, Verstappen got a much better getaway from second place than pole-winner Sainz and leapt immediately in front of the Ferrari to take the lead before the braking zone of turn one. As the field rounded the first corner, George Russell speared into the back of Sainz at the apex, sending the Ferrari into a spin and dropping him to the back of the field.

Sainz recovered his car and continued, but he was pulled into retirement at the end of the first lap as the contact had caused a water leak which meant he could race no further. Russell was quickly handed a five-second time penalty by the stewards for causing the collision.

Verstappen led from the two Mercedes of Hamilton and Russell in third. Sergio Perez made up five places over the opening laps to move up to fourth behind Russell’s Mercedes, despite losing the right hand end plate from his front wing.

Hamilton was the first of the leaders to pit at the end of lap 12, rejoining in seventh place on hard tyres. Verstappen followed suit from the lead on the following lap, emerging in second behind team mate Perez. Russell also stopped for hards and served his five second penalty, which would drop him behind Perez after the second Red Bull pitted.

On lap 18, Valtteri Bottas suddenly lost control of his Alfa Romeo into the penultimate corner, spinning off and into the gravel trap. With Bottas’s car in the gravel, the Safety Car was deployed, which allowed Leclerc to pit for hards and rejoin in fourth place, behind Perez.

The race restarted on lap 22, with Verstappen leading from Hamilton, Perez, Leclerc and Russell. But as the field drove along the back straight for the first time under green flag, Fernando Alonso collided with future team mate Lance Stroll, sending the Alpine into the air briefly and the Aston Martin spinning. The Safety Car was immediately deployed again, as debris littered the back straight. Alonso recovered to the pits for repairs and continued, while Stroll was out of the race.

The race restarted three laps later with Verstappen again leading away Hamilton and Perez. Leclerc, on fresher hard tyres, passed Perez for third with a lunging move into turn 12. Hamilton kept in touch with the leader until he made a second pit stop for a second set of hard tyres. Verstappen pitted a lap later for mediums tyres, but a lengthy delay on getting his left-front wheel cost him many seconds and allowed Leclerc to pit and exit out ahead of the former leader.

Hamilton inherited the net lead of the race as Sebastian Vettel took over the lead briefly having only pitted once. Having lost position to Leclerc, Verstappen dived by the Ferrari into turn one but Leclerc cut back to retake the place. Eventually Verstappen used DRS down the back straight to complete the pass and take second place.

Hamilton overtook Vettel to take over the true lead of the race as Verstappen began to chip away at the gap to the leader ahead. With eight laps remaining, Verstappen was within DRS range of Hamilton. On lap 50, Verstappen slipstreamed up to the back of the Mercedes and out-braked Hamilton into turn 12 to take the lead.

Verstappen pulled out a gap over the final laps to take the chequered flag and secure the constructors’ championship for Red Bull. Hamilton finished just over five seconds behind the winner, with Leclerc just under three seconds further back. Perez took fourth in the second Red Bull ahead of Russell’s Mercedes, who took the fastest lap after pitting in the closing laps.

Lando Norris took sixth for McLaren, with Alonso recovering from his accident to finish seventh. Vettel lost time with a slow pit stop but held off Kevin Magnussen to take eights, with Yuki Tsunoda provisionally taking the final point in tenth, but is under investigation for a late race incident with Alexander Albon.