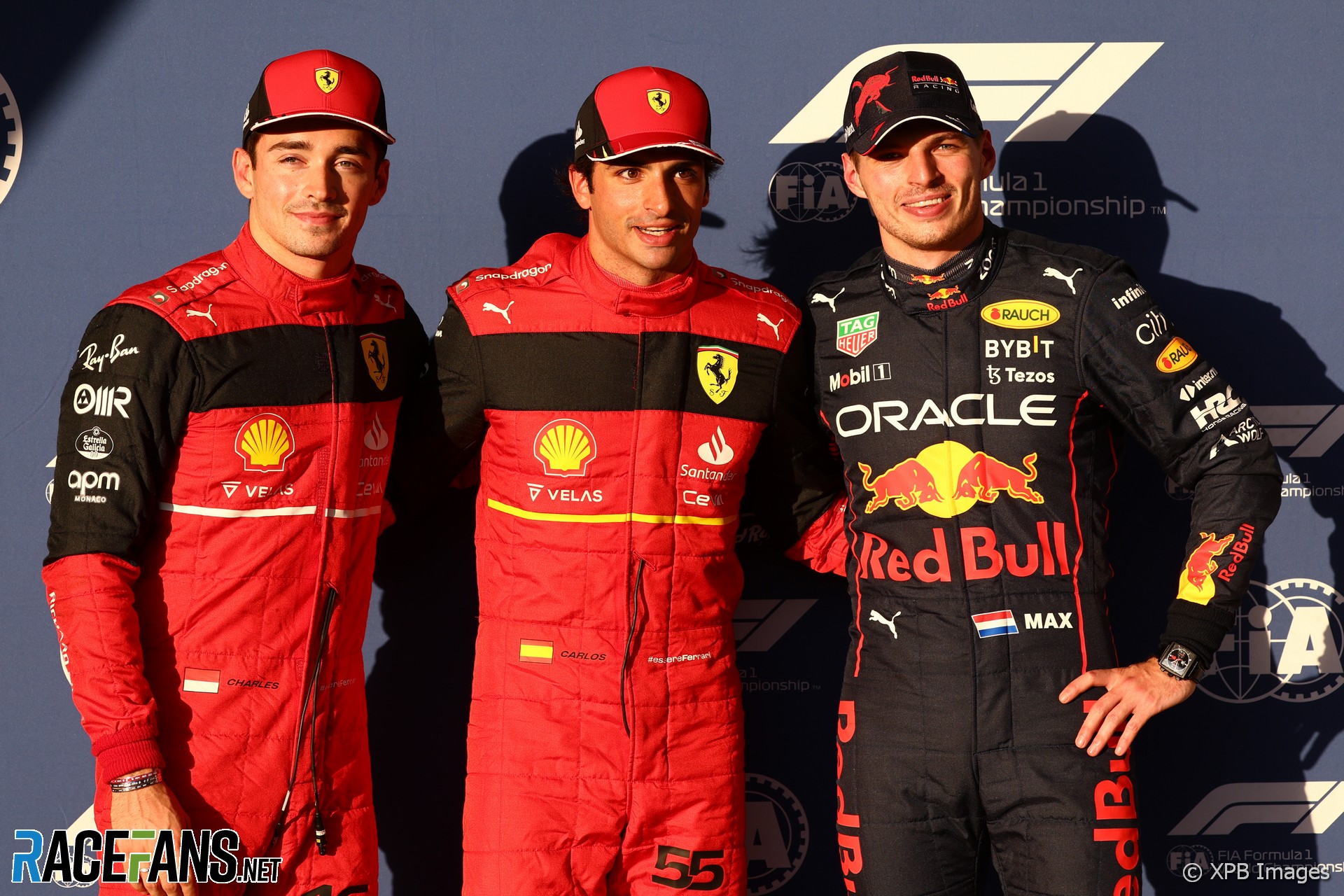 Sainz pipped Leclerc by less than a tenth of a second, with Max Verstappen taking third which will become second on the grid with Leclerc’s penalty.

Sergio Perez will also drop down the starting order due to a penalty, promoting the Mercedes of Lewis Hamilton to third on the grid alongside his team mate.

The Circuit of the Americas was warm and windy with hundreds of thousands of fans packing the grandstands at the start of the first phase of qualifying. However with wind speeds of over 23km/h around the circuit, the 20 drivers faced an extra degree of difficulty as the session began.

Charles Leclerc headed out for the first time in the knowledge that he will start the race up to 10 places further down from where he qualifies after a power unit penalty. That did not deter him from setting the early fastest lap with a 1’35.795, less than a tenth of a second faster than Max Verstappen. The two-times world champion complained about a slow Haas on the racing line, belonging to Kevin Magnussen, as he rounded the fast multi-apex corner of turns 16-17-18.

Alexander Albon was upset to exit turn one a flying lap to find Lewis Hamilton’s Mercedes in the middle of the track as he went past and complained about the Mercedes driver over the radio. Zhou Guanyu had his best lap time deleted for exceeding track limits at turn 12 at the end of the back straight, but insisted that he had remained inside the lines.

That lap time deletion meant Zhou sat at the bottom of the order in 20th as the cars ventured out of the garage for the last time. Kevin Magnussen, Daniel Ricciardo, Albon and Yuki Tsunoda were also at risk of being eliminated if they did not improve on their final runs.

Tsunoda’s final lap was not the neatest, but he still moved up into the top 10, which pushed Nicholas Latifi down into the drop zone with Esteban Ocon on the bubble. Zhou put in a strong final lap to move safe, but Magnussen was eliminated after losing what he estimated was “two tenths” through the first corner. His Haas team mate Mick Schumacher fell into the drop zone and his fate was sealed when he spun around at the same turn.

Ocon and Ricciardo both did not improve by enough to so safe and were out, as Albon jumped up into 15th place, narrowly getting through to Q2 with his final lap. Latifi was the final driver who had an opportunity to improve, but a scruffy final sector meant he failed to do so, and ended the session in last place.

As the sun began its descent towards the western horizon, spreading shadows across the pit straight, there was no initial rush out onto the circuit when the green lights signalled the start of Q2. Eventually the field began to trickle out onto the circuit, with the majority choosing used soft tyres for their first laps of the session.

Pierre Gasly’s first flying lap attempt was ruined at the first braking zone with a major lock-up which destroyed his tyres and his lap. The AlphaTauri driver complained about his brake bias settings over the radio as he returned to the pits. Sebastian Vettel lost his first lap time when he ran wide at the exit of turn nine and became the latest driver to fall foul of track limits – and not the last.

Leclerc went fastest with a 1’35.246, less than a tenth of a second quicker than Verstappen, with Carlos Sainz Jnr in third. Leclerc asked his Ferrari team if his first effort would be good enough to avoid having to run again in the second phase, and his team ultimately agreed he would be safe.

In the final minutes of the session, the drivers at risk were Albon, Tsunoda and Lance Stroll, plus Gasly and Vettel, the only drivers without lap times to their name. Gasly was the first over the line at the chequered flag, but it was double disappointment for AlphaTauri as Gasly failed to go safe and Tsunoda’s final lap time was deleted for a track limits infringement at the exit of turn nine, meaning both drivers were eliminated.

Zhou looked to have put in a strong lap to go safe in ninth, with Lando Norris eliminated in 11th. However, after the chequered flag, Zhou’s final lap was deleted for running too wide at turn 12, dropping him to 14th place and out and promoting Norris back into Q3 in tenth place. “Oh, this one hurts,” said Zhou on the radio. “At least we have the speed to go for it tomorrow.”

Joining Zhou and Tsunoda in the bottom five were Albon in 11th, Vettel in 12th and Gasly. The latter was visibly furious to be knocked out in 13th after struggling with his braking in qualifying for the second race weekend in succession, slamming his steering wheel as he returned to the pits.

Once again, the battle for fastest in qualifying appeared to be shaping up to be a shoot-out between Verstappen and Leclerc, with Mercedes yet again not close enough to threaten the contenders for pole position. Verstappen headed out on a lightly-worn set of softs for his first flying lap of the session as his team mate and the two Ferraris stuck a fresh set for their initial outing.

Verstappen took provisional pole position with a 1’35.044, but was unhappy with his lap. It became clear why when Leclerc blitzed him by four-tenths of a second to jump to the top spot with a 1’34.624 as Sainz moved into second place with a lap a tenth-and-a-half slower than his team mate. Hamilton also beat Verstappen’s first effort to sit in provisional third place as the drivers returned to the garage to prepare for their final runs.

Red Bull opted to send Verstappen earlier than the rest of the field, the world champion completing two slow laps before beginning his final push lap. Russell and Sainz got close to touching each other out of turn 15 as they jockeyed for track position before their flying laps, with the Ferrari keeping ahead of the Mercedes.

Leclerc improved on his final lap and lowered his own pole position time, but that was immediately beaten by Sainz who snatched the top spot by just over half a tenth. Verstappen appeared the only viable threat to deny Sainz an outright pole position, but despite going quicker than his first time, he failed to beat either of the two Ferraris, posting a time just under a tenth slower than Sainz.

That secured a second career pole for Sainz, with Verstappen gaining second on the grid after Leclerc’s penalty drops him down to 12th position. Behind Verstappen will be his team mate Perez, followed by the two Mercedes of Hamilton and Russell. Stroll will start seventh on the grid, ahead of Norris in eighth.

Fernando Alonso qualified in ninth but will be demoted to 14th on the grid after his five-place power unit penalty is applied. That promotes Valtteri Bottas up to ninth, with Albon gaining one place to complete the top 10.