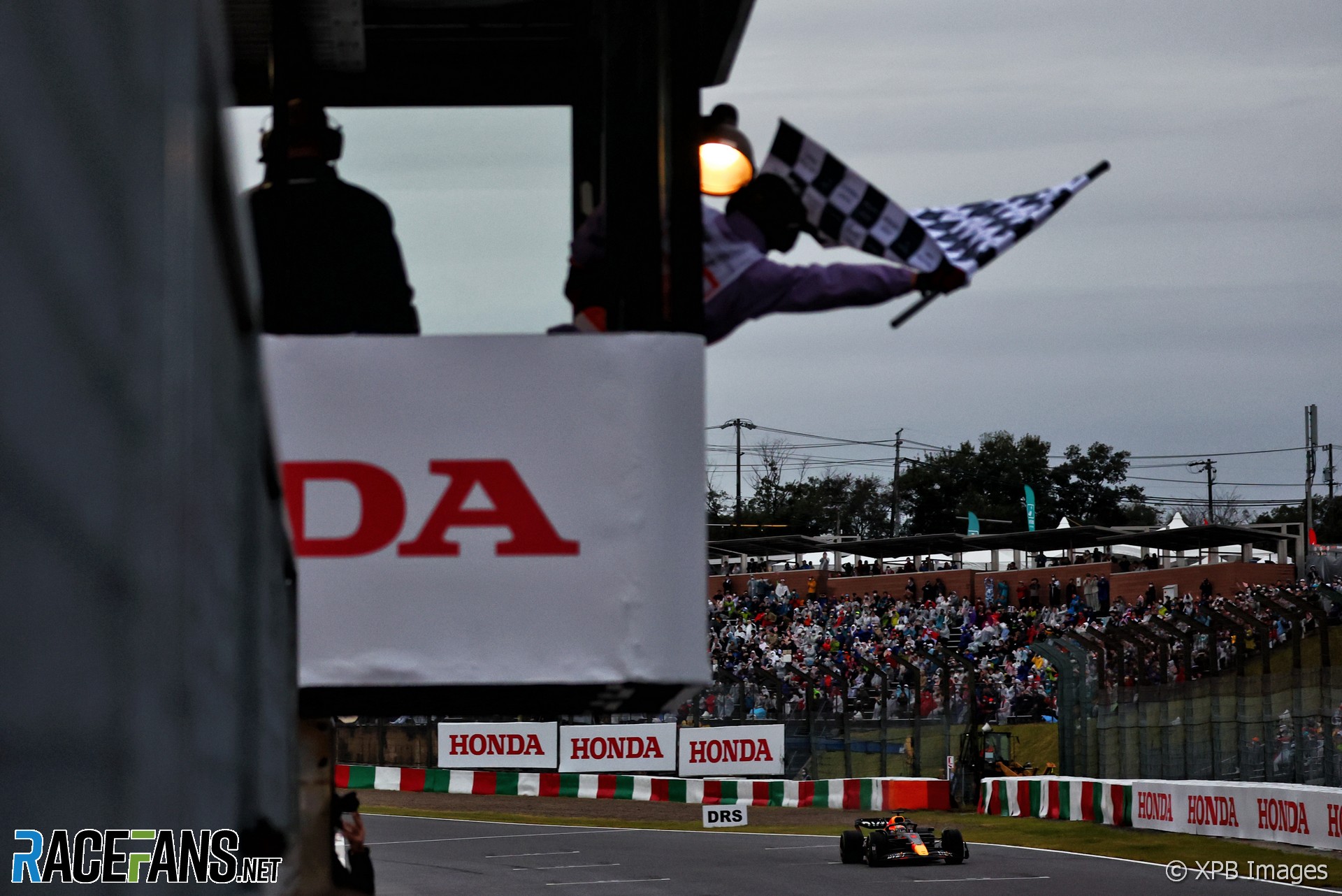 The controversial conclusion to the 2021 Formula 1 season was something no one involved in running the championship should want to see a repeat of.

The title fight between Max Verstappen and Lewis Hamilton was essentially decided by the FIA F1 race director’s failure to follow the series’ own rule book. A year-long competition undermined by a single, incomprehensible decision which was plainly at odds with the rules.

It was never likely that particular situation would be repeated this year, for the simple reason that Verstappen has long been so far ahead that his second title win has been a foregone conclusion for weeks. No one could argue the events of Sunday diminished his claim to the title.

Yet a similar sense of incomprehension greeted some moments of yesterday’s often baffling title-decider. Teams were confused over fundamental matters of how the race was being run, such as how points would be awarded and even whether the race had finished. Meanwhile drivers were livid over a shocking lapse in safety standards.

It added up to another championship-decider which did not show F1 at its best.

Too wet to race

The race began on time but the circuit was drenched. Within a matter of minutes one car was in the barrier, another was pulled off the track, a third has driving around with an advertising board blocking the view ahead and the red flags were out. Drivers at the back of the field complained that visibility was non-existent.

Inevitably, this led many to question whether the initial start should have happened. Whether to race in the rain is a dilemma F1 often faces and it isn’t an easy call to get right. Later, during the subsequent suspension, race control made one attempt to restart proceedings which had to be abandoned when the conditions did not improve as expected.

However the decision to use a standing start in the first place has to be questioned. F1 has the option of commencing proceedings behind the Safety Car, which forces all drivers to use heavily-treaded wet weather tyres instead of intermediates, which are less effective at clearing water away. This was eventually done for the restart, which proceeded successfully.

The decision not to hold a standing restart is often unpopular as drivers such as Carlos Sainz Jnr acknowledged. But on this occasion it may have been the right call.

Unquestionably the most serious matter and the one which angered drivers the most was the presence of recovery vehicles on the track during the Safety Car period which followed the original start. Several drivers noted it and conveyed their concerns at the time including Sebastian Vettel, Sergio Perez, Zhou Guanyu and Nicholas Latifi.

But the most shocked driver was Pierre Gasly. While the others were part of the Safety Car queue, Gasly had pitted and was driving more quickly in order to catch up with them. When he saw a crane unexpectedly appear through the gloom with no prior warning, he was horrified – reminded of the circumstances in which Jules Bianchi suffered fatal injuries when he struck such a vehicle at the same track eight years earlier.

The conditions and circumstances yesterday were much the same: The track was wet and getting wetter, and drivers aside from Gasly were circulating on intermediate tyres which were increasingly unsuitable for the conditions. The race was red-flagged due to the deteriorating conditions as Gasly approached the crane and a marshal who was pulling Sainz’s damaged Ferrari out of the way. The crane was parked on the outside of a right-hand turn where it could easily be struck by a spinning car.

Gasly was later penalised for speeding under the red flag – not when he passed the crane. Following the outcry from drivers the FIA has said it will “review” why the vehicle was present by the trackside. However it noted “it is normal practice to recover cars under Safety Car and red flag conditions.” Drivers will no doubt want to know how the FIA considers that consistent with its conclusion eight years ago that “it is imperative to prevent a car ever hitting [a] crane.”

When the conditions finally improved sufficiently for the race to restart, the rules allowed only 40 minutes for it to be completed. As a result, just 28 of the scheduled 53 laps were run. How far was F1 a victim of the conditions, and how far was the lack of racing a consequence of the rulebook?

In 2012 a new rule was introduced stating races must end within a certain amount of time after they start. This was originally set at four hours, then cut to three last year. This has narrowed the window of time within which a race can happen, putting F1 at the mercy of the conditions on wet days like yesterday.

In the case of Sunday’s race, the scheduled starting time was just three-and-a-half hours before sunset, so postponing the race further wasn’t an option. But earlier in the day conditions were more favourable, and a full race might have been held had it been scheduled earlier.

F1 already needlessly shortened one race this year due to this questionable rule. Japan’s passionate fans, who many in F1 are rightly quick to praise for their devotion to the sport, certainly deserve the chance to see a race in full – especially after a three year wait.

The three-hour time limit also caught teams out in other ways.

A week earlier in Singapore the race ended when the maximum two-hour race length duration was reached. In line with the rules, the chequered flag was shown on the lap after the race leader hit the two-hour mark.

But the three-hour limit appeared to be handled differently to how it had been at the Monaco Grand Prix earlier in the season, which caught out some teams who were expecting the race to continue for another lap. Some drivers carried on racing for half a lap and had to be persuaded by their teams that the race was indeed over.

Charles Leclerc’s five-second post-race time penalty for leaving the track and gaining an advantage proved the decisive moment which clinched the title for Verstappen. This wasn’t a particularly controversial decision – even Leclerc admitted it was deserved. The stewards wasted little time in handing down the penalty, though that produced an inconsistency which left Ferrari unimpressed following their long wait to learn of Sergio Perez’s post-race sanction under similar circumstances in Singapore.

Post-race penalties are an inevitable part of motorsport. But this one could have been avoided. Had there been a natural obstacle there such as a gravel trap, Leclerc might not have been able to gain an advantage in the first place. At chicanes on other circuits drivers are given specific instructions on how to rejoin the racing line in a way which loses them time – but there was no such arrangement at this corner last weekend.

F1 has introduced more consistent policing of track limits this year which on the whole has been a positive step, but as this case shows it still has work to do to stop drivers gaining an advantage by cutting corners.

Leclerc’s penalty was significant because it ended up deciding the championship. However this wasn’t widely realised at first due to confusion over which points system was being applied.

The FIA introduced a new points system for shortened races after F1 was criticised last year for its handling of the abandoned Belgian Grand Prix, where it awarded points for a race which officially consisted of a single lap behind the Safety Car. As 52% of the race distance was completed in Japan, it appeared the FIA’s ‘Column 3’ points system, used when 50 to 75% of a grand prix is completed, would apply.

Under the ‘Column 3’ points,Verstappen would have been one point short of taking the title by winning the race with Leclerc in third. Red Bull believed that was the situation, and during the final laps of the race were considering a pit stop for Verstappen to give him a chance of setting the fastest lap and claiming the bonus point which would make him champion.

But to the surprise of Red Bull, plus their rival teams and many of those watching, the FIA decided to award full points for the race. This flew in the face of the post-Spa rules change, yet was supported by a clause in the regulations which stated the reduced points would only be awarded if the race “is suspended… and cannot be resumed”, rather than finishing at the time limit.

While many of the problems F1 encountered in its season finale was familiar, this one at least was new. But as was the case last year, at the moment F1 should have been celebrating its latest world champion, the focus was instead on the rule book.