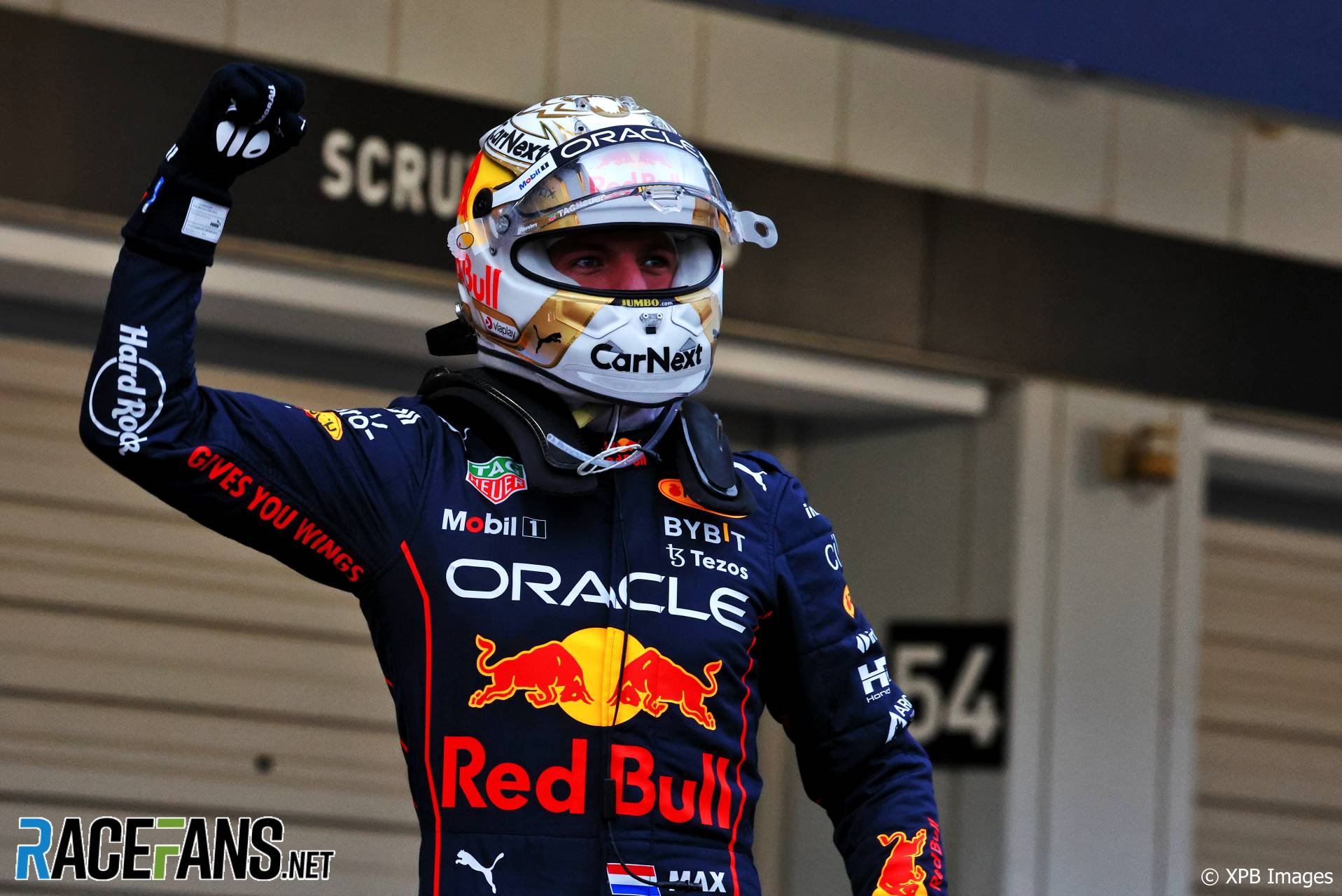 After an accident at the start led to the race being red flagged for over two hours, the race eventually resumed with Verstappen winning by almost half a minute. Charles Leclerc finished second on track but was handed a five second time penalty after the race which moved him behind Sergio Perez into third.

With full points awarded despite only just over half of original race distance having been completed, Verstappen clinched his second world championship title.

The field lined up on the grid on intermediate tyres for a standing start, with Pierre Gasly starting from the pit lane having changed parts on his AlphaTauri prior to the start. When the lights went out, Leclerc got a better getaway than Verstappen and was marginally ahead on the inside approaching turn one, but Verstappen held firm around the outside and kept the lead.

Visibility in the pack was close to zero. Eventually, Carlos Sainz Jnr aquaplaned off the road rounding turn 12 and crashed into the barrier. Fortunately, the field behind all managed to miss the Ferrari off on the left side of the track. Alexander Albon pulled off soon after passing the Ferrari with a loss of water pressure following earlier contact.

The Safety Car was deployed with Verstappen leading from Leclerc, Sergio Perez and Esteban Ocon. With drivers complaining of dangerously low visibility, the race was red flagged with all drivers returning to the pits.

Gasly had pitted on the opening lap with front wing damage and was infuriated to find a recovery vehicle on the track as he passed Sainz’s stricken Ferrari in the treacherous conditions. The stewards have placed Gasly under investigation for driving too quickly under red flag conditions.

Verstappen led away from Leclerc, Perez, Ocon and Lewis Hamilton in fifth. As the race resumed, Sebastian Vettel and Nicholas Latifi both pitted for intermediate tyres. After two laps of racing, it was clear that the intermediates were the quickest tyre to be on.

Back in the lead, Verstappen quickly pulled out a healthy advantage over Leclerc behind him. Perez began slowly reeling in the Ferrari driver ahead of him, but drivers began to struggle with their intermediate tyres falling away as the laps progressed.

With just over eight minutes remaining, Alonso opted to pit from seventh for a second set of intermediates, rejoining in tenth. However, the rest of the field remained out on their used tyres.

Verstappen continued to control the race out in the lead as the final minutes ticked away. When time expired, Perez was right behind Leclerc and pressuring the Ferrari for second place. There was confusion with some teams expecting an additional lap after time expired, but the chequered flag flew as Verstappen crossed the line after the time had hit zero.

Almost half a minute behind the winner, Leclerc and Perez were battling hard over second place on the final lap but Leclerc missed the chicane at the end of the lap and rejoined ahead of Perez, before blocking the Red Bull driver from passing him over the line. Leclerc was quickly handed a five second time penalty by the stewards for leaving the track and gaining a lasting advantage, which promoted Perez up to second on the podium.

Full championship points were awarded for the race, with Leclerc’s penalty meaning that Verstappen was now mathematically unable to be beaten on points and was world champion.

Outside the podium, Esteban Ocon finished fourth, holding off Lewis Hamilton over the final laps. Sebastian Vettel only just held onto sixth place from Alonso, who recovered back to the position he was in prior to pitting for new tyres. George Russell took eighth, with Nicholas Latifi securing his first points of the year in ninth. Lando Norris completed the top ten.