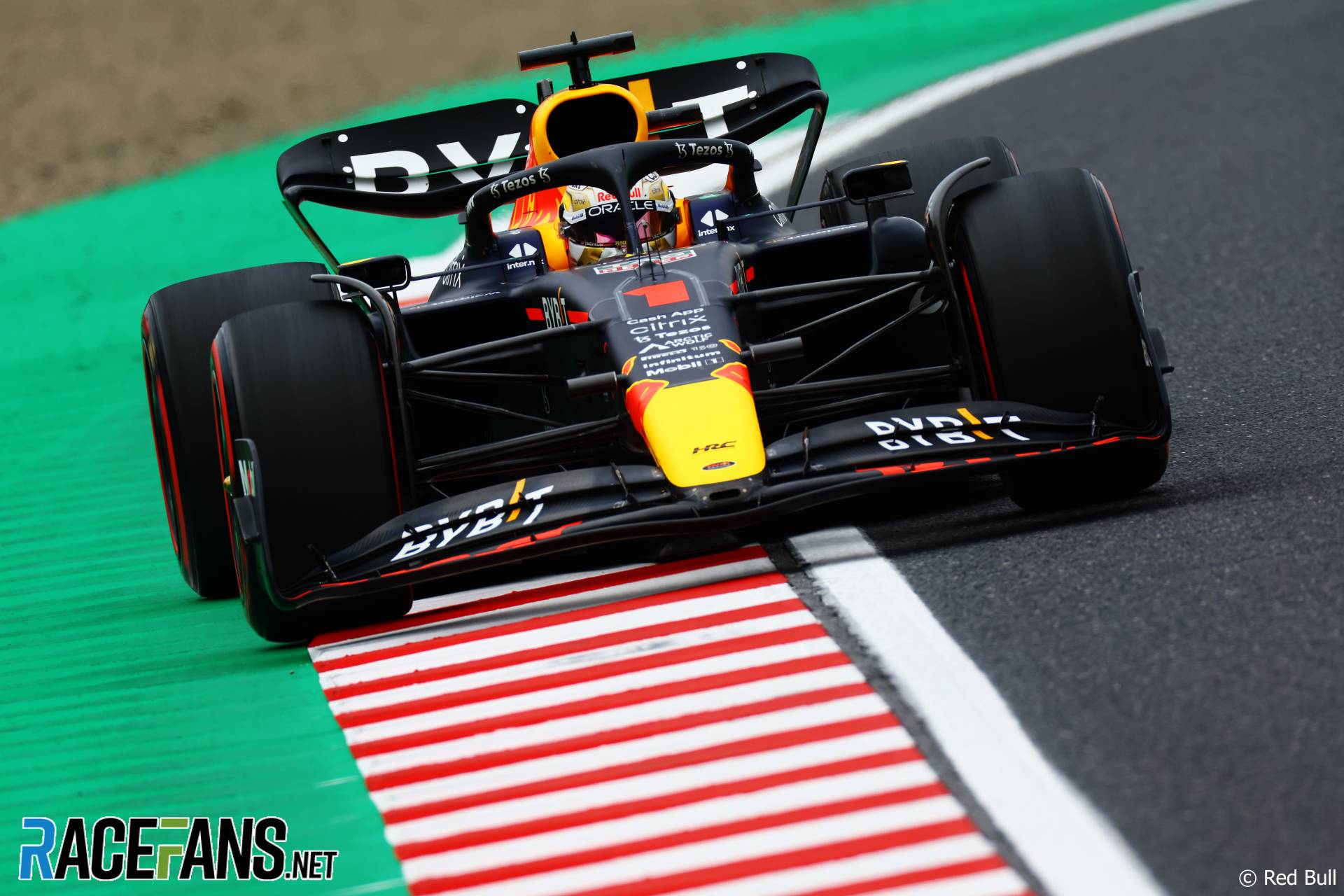 Max Verstappen set the pace heading into qualifying for the Japanese Grand Prix ahead of both Ferraris in the only dry practice session around Suzuka.

The Red Bull driver posted a fastest time of a 1’30.671, almost three tenths faster than Carlos Sainz Jnr and Charles Leclerc after all three completed qualifying simulation runs on soft tyres in the closing minutes.

After both Friday practice sessions were run in wet conditions, it was little surprise when a large queue formed at the end of the pit lane with drivers keen to make the most of the only hour of dry running they would get ahead of qualifying. Sainz was the first driver to set a flying lap, posting a 1’35.491 for the very first dry lap of the weekend on the soft tyres.

Verstappen’s first lap fresh out of the garage jumped him to the top of the times with a 1’32.050 – also on the softs. That was over a second faster than team mate Sergio Perez, who went second quickest, while the two McLarens of Lando Norris and Daniel Ricciardo went third and fourth on their initial laps around the Suzuka circuit.

World champions Fernando Alonso and Lewis Hamilton were the only two of the 20 drivers to opt for hard tyres for the early phase of the session as the majority of the field remained out on track to conduct long runs in the limited time they had available. The two Red Bulls returned to the garage for adjustments and by the time they got back out it was an almost empty track as the rest of the field had reached the end of their first long runs.

The track was bone dry but drivers were still having to contend with wind upsetting their cars through the high speed corners. Daniel Ricciardo missed the chicane after locking up under braking and Hamilton also ran deep into the chicane with a locked-up right front wheel. “Very gusty,” he told Peter Bonnington on his radio. “Wind gusts appear to be aligning with some of the snaps that we’re having,” his race engineer noted.

Around half way into the hour, the Ferraris of Sainz and Leclerc headed out for low-fuels run on softs. Sainz went fastest of all with a 1’30.965, with Leclerc moving to second, but four tenths behind his team mate. Verstappen then took to the track on medium tyres and improved to jump into second, three-and-a-half tenths off Sainz’s benchmark time.

In the final 10 minutes of the session, Verstappen and the two Ferraris all fitted fresh sets of soft tyres for qualifying simulation runs. Leclerc improved his personal best to go second, just 0.015s slower than his team mate, while Sainz was unable to beat his own best time, despite improving in the first sector. Verstappen was the last of the three to complete his lap and went purple in all three sectors to move into the top spot, almost three tenths faster than the Ferraris.

At the chequered flag, Verstappen was fastest of all, ahead of Sainz and Leclerc, with Fernando Alonso fourth in the Alpine ahead of the second Red Bull of Perez. The two Mercedes of George Russell and Hamilton were sixth and seventh, with Lando Norris eighth – the first driver to be outside of a second of Verstappen’s best time. Esteban Ocon and Lance Stroll rounded out the top ten.