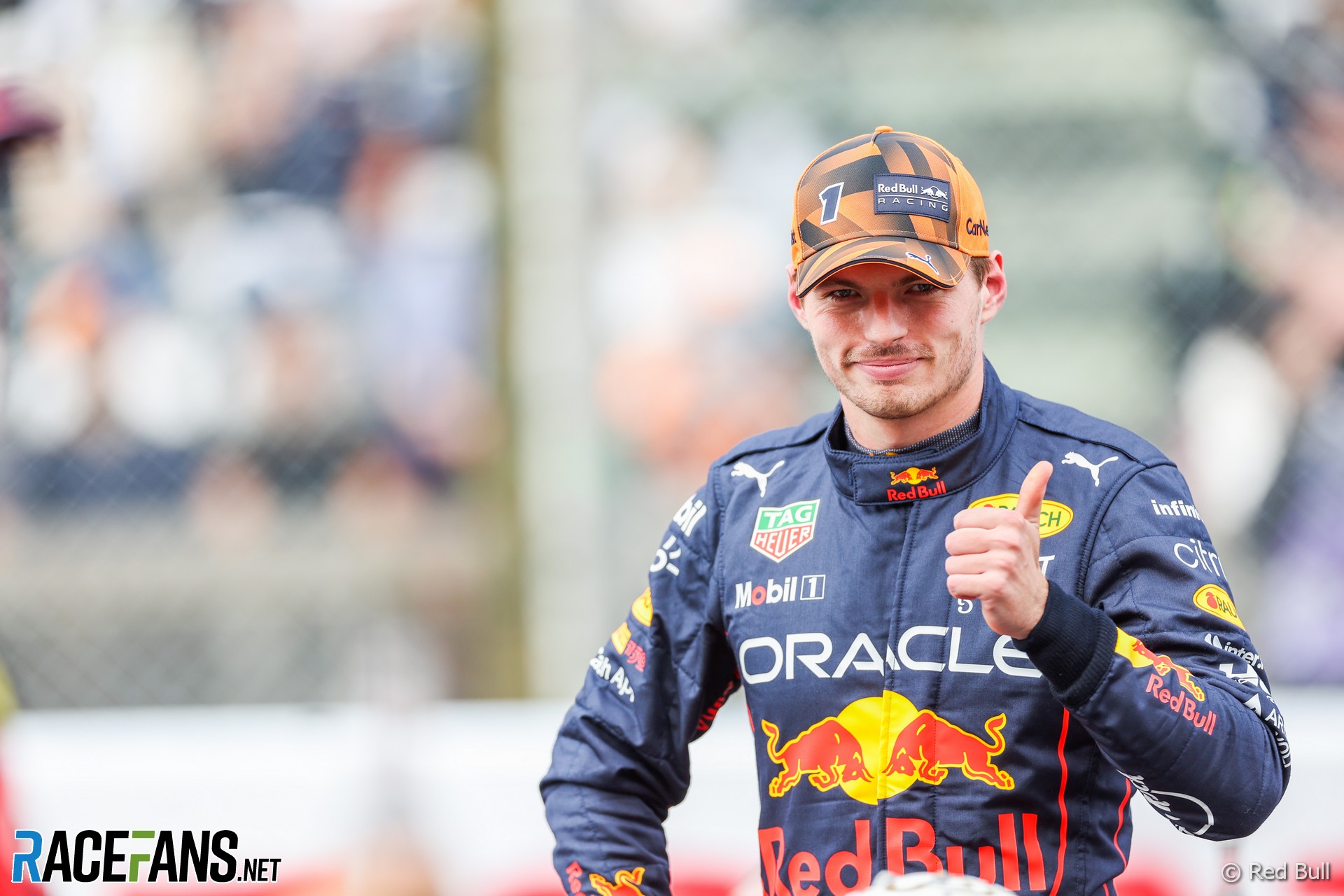 Out of the 72 Formula 1 world championships contested, the title was decided at the season finale on 30 occasions. In most seasons, the champion put the title out of reach with at least one round to spare.

Tomorrow, in Japan, Max Verstappen has his second opportunity in the space of eight days to put the drivers’ championship out of sight and become only the 17th driver in history to claim multiple world titles. And by securing pole position at Suzuka, the Red Bull driver has given himself the best possible chance of making that a reality on Sunday.

However, that pole position was secured by the slimmest margin of the season so far – just one-hundredth of a second ahead of Charles Leclerc and his Ferrari team mate, Carlos Sainz Jnr. It’s quite possible the margin could have been larger, had Verstappen improved on his second and final effort, but losing a piece of bodywork from the rear of his car on his last lap may have prevented him from realising his full potential over one lap.

“I am really happy to be on pole and in general – just super happy to be back here in Japan,” Verstappen said.

“During qualifying, I lost a part of the duct from the car in my final lap so that’s why I couldn’t really improve, nevertheless the first lap was good enough.”

Leclerc was audibly angry over team radio to have missed out on extending his already rich poles tally for the season – and he had every right to be. He had been almost a tenth up on Verstappen’s first lap before reaching the chicane, but after braking later than the Red Bull driver Leclerc couldn’t get back on the power as early as his rival. His advantage over the Red Bull whittled away, until Verstappen was finally ahead of him mere metres from the finish line.

“The car was good, I was struggling more with the tyres to put everything together, first and last sector especially,” Leclerc explained. “The more I was pushing in the first sector, the more I was going slow in the last sector, losing a little bit the tyres. So, it was a tricky one but overall the car felt good.”

Aside from qualifying, Saturday’s hour-long practice session was the only dry running teams had in which to prepare their cars. Verstappen ran a seven-lap stint on four-lap old soft tyres, setting an average lap time of a 1’37.684. Ferrari appeared to be faster than Verstappen’s run, with Sainz logging an average pace almost a second a lap quicker than the Red Bull on fresh softs, while Leclerc also matched his team mate’s pace – but on the mediums.

“I think we managed to hook up a good balance in FP3, which is a good sign,” said Sainz.

“It means we understand the car and we know the baseline set up normally works well in every track now. It’s now a matter of who that last half-a-tenth falls in favour of, which today was in favour of Max. At other circuits, it’s in favour of us. But it’s-super tight, at least in quali.”

But rather than it being a straight fight in the dry between Verstappen and the two Ferraris on Sunday, there is a genuine risk that rain could play a factor for the second consecutive race weekend. Light rain is expected overnight which may continue into the afternoon and act as a wildcard for how the race will play out.

Mercedes certainly hope the rain will come. They qualified among the Alpine drivers in only sixth and eighth places for Lewis Hamilton and George Russell, respectively in part due to Mercedes running much higher downforce levels than the Red Bulls and Ferraris. The W13s were up to 10kph slower than Verstappen along the straights. The team’s trackside engineering director, Andrew Shovlin, said the team had set up their cars with inclement weather in mind.

“We stayed on the higher rear wing levels as the degradation in the morning was very high and there is a growing risk of rain in tomorrow’s race,” Shovlin explained. “In both of those situations, the wing level should be a benefit. It will not be a benefit getting past the Alpine cars, though, which we need to do early if we stand any chance of getting into a race with Red Bull and Ferrari.”

The Ferrari drivers confirmed they had set up their F1-75 with the aim of trying to get the best performance in dry conditions. “Honestly, there was no big compromises done for tomorrow,” said Leclerc.

“Obviously the forecast is predicting a little bit of rain here and there. We won’t know whether it will happen or not but it was very tricky though, to actually have the car ready and in the right spot for qualifying after only FP3 but I think we did a good job on that so it didn’t compromise us.”

Sainz seemed fairly certain that rain was a matter of when, not if. “Tomorrow, the rain, we don’t know if it’s going to arrive at two, at three, at four but it looks like it will hit us,” he said.

“You don’t know if the rain is going to arrive in the last stint, in the first stint or after the race, which [means] it’s not worth taking any compromises. But the good thing is that we have both cars up there again, ready to put the pressure on Max and see when the rain comes and how we can get both of us ahead.”

Fortunately for teams, if it does rain, they at least have the benefit of nearly three hours of wet running over Friday they can draw from. Regardless of whatever the conditions will be, Verstappen knows securing his second title on Sunday will not be a walk in the park.

“I’m not thinking about it too much,” Verstappen said.

“I think what was most important is that we would have a competitive car and clearly we had that today in qualifying. I hope of course it’s going to be the same tomorrow in the race – because we do need a perfect race to be able to win it tomorrow. But at least it’s a good start.”

Will Verstappen clinch the championship at the second time of asking? Can Ferrari find a way to stop Red Bull’s winning streak?

Share your views on the Japanese Grand Prix in the comments.