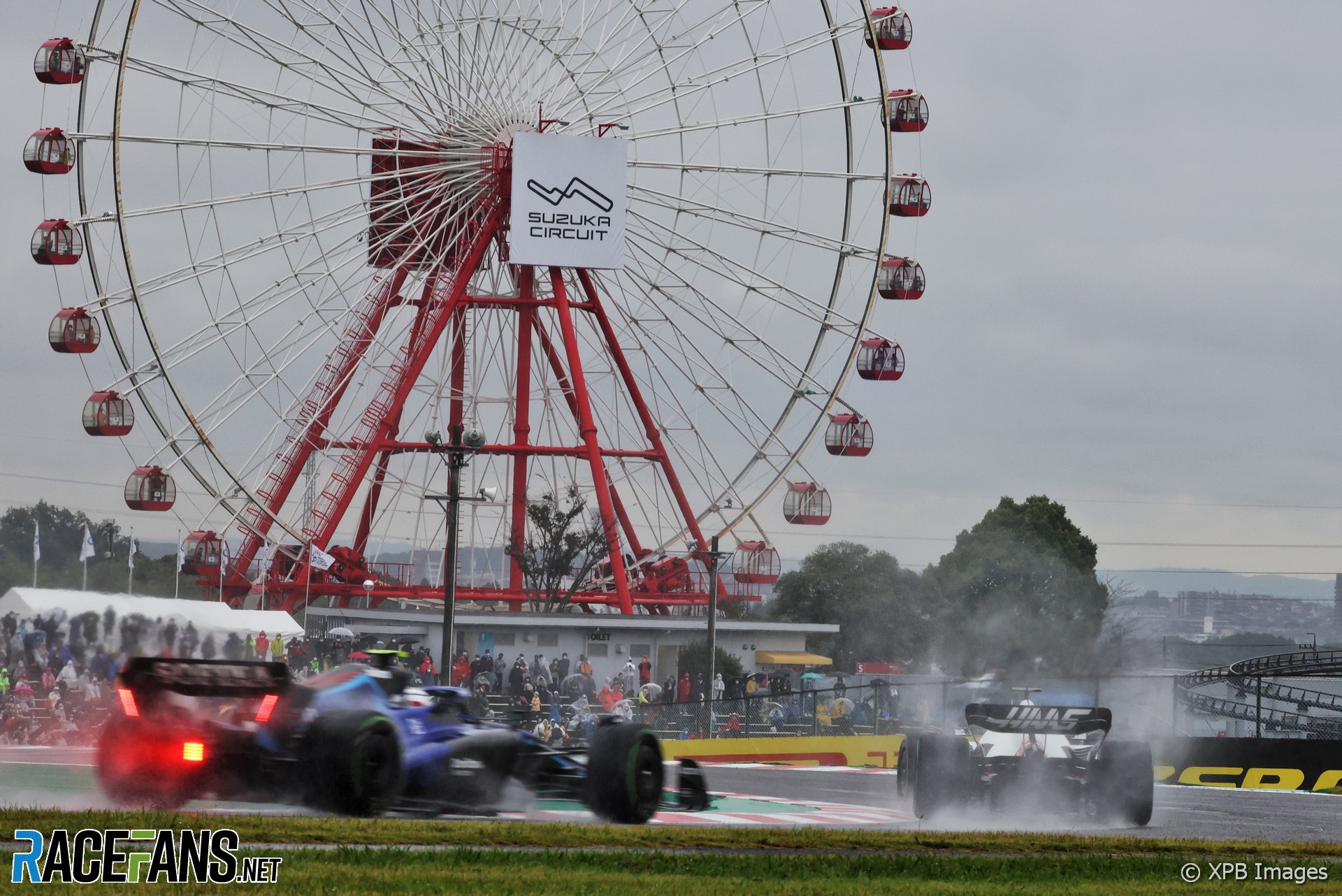 Of all the circuits Formula 1 has been made to stay away from over two Covid-affected seasons, it seems clear that the one drivers missed the most has been Suzuka.

Across the length of a the pit lane, drivers seemed to be just as thrilled to be back in Japan as the passionate, eclectic local fans were pleased to be able to watch F1 up close once again.

However, one aspect the paddock likely would not have missed about the famous figure of eight track located near the coast of Mie Prefecture is its weather. From typhoons to rain more regular than at the likes of Silverstone, rarely in the modern era does a three-day race weekend at Suzuka go by without wet tyres being called into action at some point.

As if to prove this point, the first day of practice for the 31st world championship grand prix held at Suzuka was one of the rare Fridays this year where not a single lap was completed on dry tyres by any of the 20 cars. Instead, the entire field will only have a single hour of expected dry running on Saturday to test their cars on the different compounds, plan their strategies and, crucially, decide whether or not to go with a dry set-up for qualifying or potentially prepare their cars in the expectation more rain is to come on Sunday.

At the end of a very wet day of running, Mercedes sat at the top of the times with George Russell ahead of team mate by two tenths of a second. It was a big improvement over the pair’s placing in the earlier session, where Russell had ended first practice in 18th and Hamilton 13th after both had ventured out onto the track far later than their rivals and saw the track conditions quickly deteriorate as more rain arrived.

“The wet conditions today were probably not that representative for the rest of the weekend,” fastest driver Russell admitted.

“It was a good learning opportunity for the future. It’s important to understand things like the tyre crossover from wet to intermediate, and even if that doesn’t pay dividends this weekend, it will in the future.”

There remains a modest, but by no means small, risk that Sunday may also be affected by rain. With teams being limited to how many sets of wet and intermediate tyres they used, Mercedes made the call to run three separate sets of intermediate tyres over the second 90-minute session. Technical director Mike Elliott later explained they were simply scrubbing their intermediates available to be better prepared for Sunday should they require them.

“To be honest, we’ve only put significant mileage on one set,” Elliott told Sky. “The other two sets were sort of just a scrub run really. So it won’t really make any difference if we need them in the race.”

Behind the two Mercedes in third were the Red Bulls of Max Verstappen and Sergio Perez. Verstappen has a genuine opportunity to seal the championship on Sunday and while he was happy to be in the top three at the end of the day, he felt he and his team had not really learned anything from the day.

“I just would have liked that it was a little bit more representative,” he said.

“Luckily it wasn’t a complete disaster with the weather. At least we could get round and do a little bit of stuff. But in terms of knowing where you are and what pace – in the wet, it’s always a bit tricky.”

While there was little to judge about their potential in the dry, Perez was encouraged by how his Red Bull had felt around the slippery Suzuka circuit and the prospects of a second consecutive wet race.

For Ferrari, Carlos Sainz Jnr was the highest-placed driver, in sixth behind Kevin Magnussen, who looked far more comfortable in the conditions than his team mate Mick Schumacher had. Charles Leclerc dropped from third-fastest in the earlier session to outside of the top ten in the second – but there was a simple explanation, according to the Ferrari driver.

“FP1 was fun. FP2, no tyres left,” Leclerc explained. “Overall it was quite a good day. The feeling with the car is good, just need to put everything together tomorrow.”

Leclerc was the one likely contender for the victory who suffered a major scare during the session, almost beaching his Ferrari in the gravel trap at the hairpin after he could not get his car slowed down over the limited length of Tarmac offered to him.

“I think FP2 was very, very difficult because the tyres were just completely done,” he reiterated. “But there’s plenty to learn from today for the race, especially. Let’s see tomorrow, because conditions will change a lot, so FP3 will be about adapting to those conditions as quickly as possible. Let’s see what’s possible.”

McLaren arrived in Japan off the back of one of their best points hauls of the championship, but Lando Norris and Daniel Ricciardo both languished towards the bottom of the times – 16th and 17th – at the conclusion of the second session. Ricciardo says he’s looking forward to effectively “starting from scratch” tomorrow morning.

“I kind of like that – it’ll be one practice and straight into quali,” he said.

“But then Sunday still looks like there is some rain about at the moment – probably later in the day – but all that needs to do is come an hour earlier and then that falls into the race.”

With third practice set to start at 4am UK time, McLaren’s executive director of racing, Andrea Stella, expects it will be a long night in the simulator at Woking and for the other nine teams too.

“We expect tomorrow to be dry, so the work to set up the car will be more based on simulations and experience than on the actual data gained on Friday, which is an interesting challenge,” Stella said.

“But it is the same for everyone. Hopefully, we can use FP3 efficiently and get some good preparation for qualifying and the race.”

Until the cars hit the track in the dry for the first time, not even Russell can be sure what the order will be at the front.

“I’ve no idea what to expect tomorrow in the dry,” Russell said. “We will be battling for the top six positions, and hopefully we have a shot at something better than that. Let’s wait and see.”