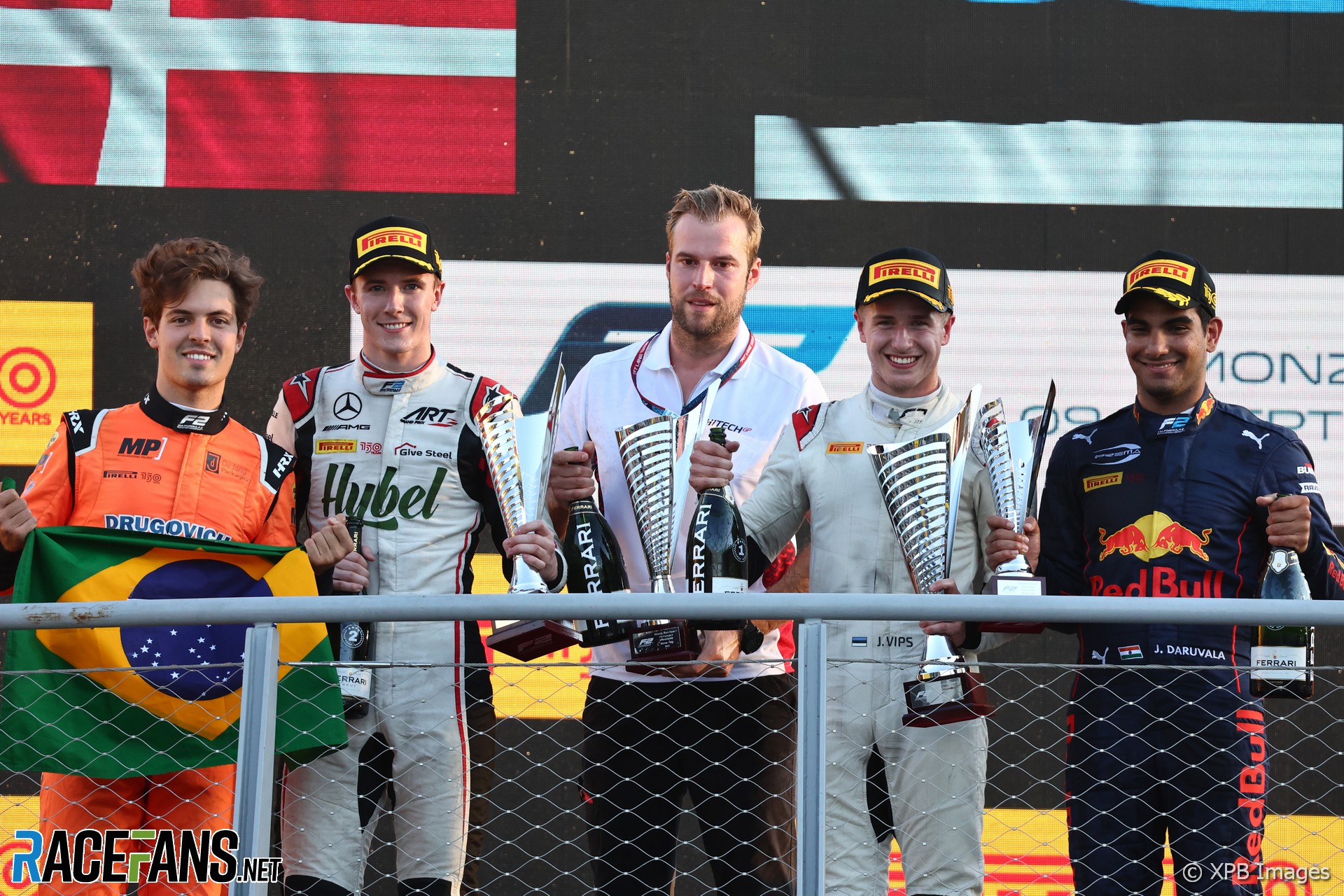 Felipe Drugovich sealed this year’s Formula 2 title despite watching most of the Monza sprint race from the pit wall.

The race was won by Jüri Vips, with neither Drugovich or title rival Théo Pourchaire scoring points. Drugovich’s 69 point lead has secured him the title with three races remaining.Frederick Vesti started the race on partially-reversed-grid pole, having qualified 10th, with Logan Sargeant sharing the front row. Championship leader Felipe Drugovich started twelfth after Sargeant had a poor getaway, dropping back immediately as he was passed by Vips and Ayumu Iwasa.

Drugovich collided with Amaury Cordeel on the exit of the Roggia chicane, Drugovich forced wide onto grass and contact with Cordeel’s wheel breaking his suspension. Pourchaire, meanwhile, also went backwards at the start, losing a place to Marino Sato.

Olli Caldwell and Tatiana Calderon also crashed around the first Lesmo, prompting a Safety Car period to begin on lap two while their cars were removed from the track. The incident will be investigated by the stewards after the race.

The race restarted on lap four and Vips out-braked Vesti into the first chicane, snatching the lead. Meanwhile Porchaire was able to pass first Sato through the first Variante and then Ralph Boschung through Ascari, climbing to twelfth.

Pourchaire also got close to contact with Cordeel, passing him through Roggia with their wheels nearly brushing. A bad race for MP Motorsport got worse when Boschung collided with Clement Novalak, sending Boschung back to the pits to retire with steering damage while Novalak limped back with a seriously skewed front wing and a front left puncture, also retiring.

Jehan Daruvala took third from Iwasa at the start of lap 10 while Vesti seemed unable to keep pace with Vips, dropping more than two seconds back from the leader.

On lap 14, Pourchaire’s charge up the grid was interrupted as he dipped into the gravel trap out of Roggia while fighting with Liam Lawson and found himself falling down the order, relegated to 17th and last. Pourchaire was also issued a five-second time penalty for the incident, having been found at fault before the final lap.

From the MP pit wall, Drugovich could only watch on as Vips, Vesti and Daruvala took the chequered flag for the podium positions, but Drugovich had secured the 2022 Formula 2 championship. He has led the 2022 F2 title since the second round in Jeddah and has not relinquished it ever since.