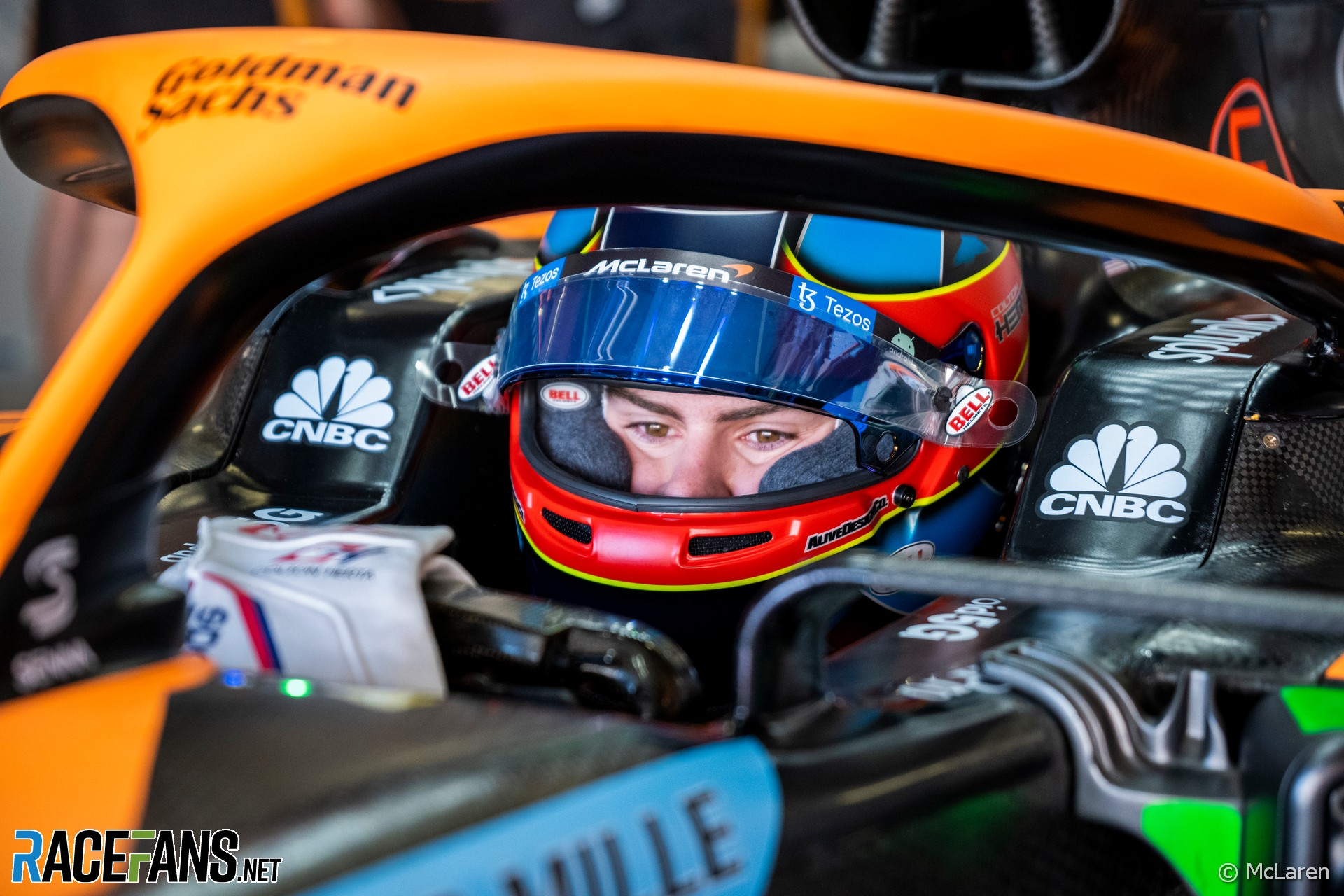 In the round-up: McLaren Racing CEO Zak Brown says he will not prevent test driver Colton Herta from pursuing race opportunities in Formula 1 outside of the team.

Colton Herta tested a 2021 McLaren Formula 1 car in Portugal in July as part of a programme with the team. After McLaren confirmed Oscar Piastri as Lando Norris’s team mate for 2023, Brown said they would not prevent Herta from pursuing other F1 opportunities with rival teams.

“I think we would never want to hold a driver back,” Brown said. “Racing drivers want to drive. I think it’s admirable that someone like Oscar sits out a year – we’ve seen Esteban [Ocon] sit out a year – but we want to encourage racing drivers to race.”

Josef Newgarden will start Sunday’s IndyCar race at Portland from six places further back on the grid than he qualifies after taking a fifth engine of the season ahead of Friday’s practice sessions. The Penske driver sits three points behind team mate Will Power in the drivers’ standings with just two races remaining in the series.

First practice at the track, which is ongoing, was heavily delayed by a red flag caused by a video screen collapsing (see below).

Lando Norris says he is looking forward to racing alongside Oscar Piastri when 2021 Formula 2 champion joins him at McLaren in 2023.

The Alpine junior driver has been formally confirmed at McLaren for next season following the decision of the FIA’s contract recognition board. Piastri will be Norris’s third team mate at McLaren since making his debut in 2019 and will be his first team mate younger than him.

“I look forward to it,” said Norris. “Another new year, someone new to work with.

“It’s always different for every driver to work with someone different and of course it will be a new challenge for everyone, including himself. So yeah, welcome to the team Oscar.”

"I think from my side a pretty good season. And it might not look good in terms of actual points and results, but I think what’s been good lately is just the consistency. We haven’t had the car to achieve podiums very often or even top fives and even top 10s at times. But I’ve just been there when I’ve needed to be."

"We have two good starting positions in both races. Tomorrow will be challenging starting from seventh. We’ll see how the tyre deg is, maybe it will be more of a test for Sunday’s race. Starting from sixth, I think we can hope for top four at least if we have a good start. Overall, the target will be to score as many points as possible to be in the fight come Monza."

"The program, which is designed to support the next generation of women to succeed as engineers, mechanics, entrepreneurs and in other motorsports-related careers, is entering its second year. College students from around the country have until Sept. 30, 2022 to apply for the fully-funded program set for summer 2023."

"18 drivers and a zombie apocalypse, who survives? We asked our drivers who they thought would be the last woman standing."

"Here, we are going to rank every Formula 1 World Champions’ debut race. Not just how they performed, but how the weekend went as a whole; whether they had bad luck with mechanical problems, got penalised, or got caught up accidents that weren’t their fault."

Keepin' it weird in Portland. With a weird red flag…

Practice 1 has been stopped because of issues with the big screen board near the front stretch.#INDYCAR // #PortlandGP pic.twitter.com/nG3IctFPk1

Obviously this is not the way we wanted the weekend to start, so overnight we will work hard to come back stronger tomorrow.

Nevertheless, it’s really great to see so many fans out here on #SuperFriday 🇳🇱 Thank you for your support and see you tomorrow 👊#KeepPushing #DutchGP pic.twitter.com/oeELd0yXe7

#F2 has confirmed a one-off rules change for this weekend.

This is believed to be due to Zandvoort's short pit lane. pic.twitter.com/CXbtnT4T9e

This was a cool start to the weekend! Such a pleasure to sit down exclusively with @maxverstappen1 this weekend ahead of his home race for @racefansdotnet! #F1 #DutchGP

There’s something really weird going on with Ferrari-powered cars exiting the last corner. Every now and again – but not always – they’ll suddenly get very noticeably louder, but it isn’t related to flying laps or DRS. We’ve been scratching our heads about it #DutchGP 🇳🇱

And he wound up an incredible P7! 😱#DutchGP #F3 pic.twitter.com/Nx9HVFKAS8

unfortunately Imola will feature the smallest Euroformula grid since the series' creation as Spanish F3 in 2000. Just eight cars taking part, it's never gone below 10 cars prior to this weekend

With Christian Horner asserting that any manufacturer joining them in Formula 1 would have to do so on Red Bull’s terms, reader Pedro Andrade says Horner is fully entitled to do so…

I’m not particularly a fan of Red Bull, but they do have:

– the F1 champion, which is one of the best ever talents
– the best F1 designer ever
– huge up-to-date facilities
– huge workforce
– a recent history of success (five title-years in the past 15 years)
– a fully-fledged young driver programme

When Horner says Red Bull is in the driving seat, he isn’t joking, Porsche would be mad to not accept this team as is.
Pedro Andrade