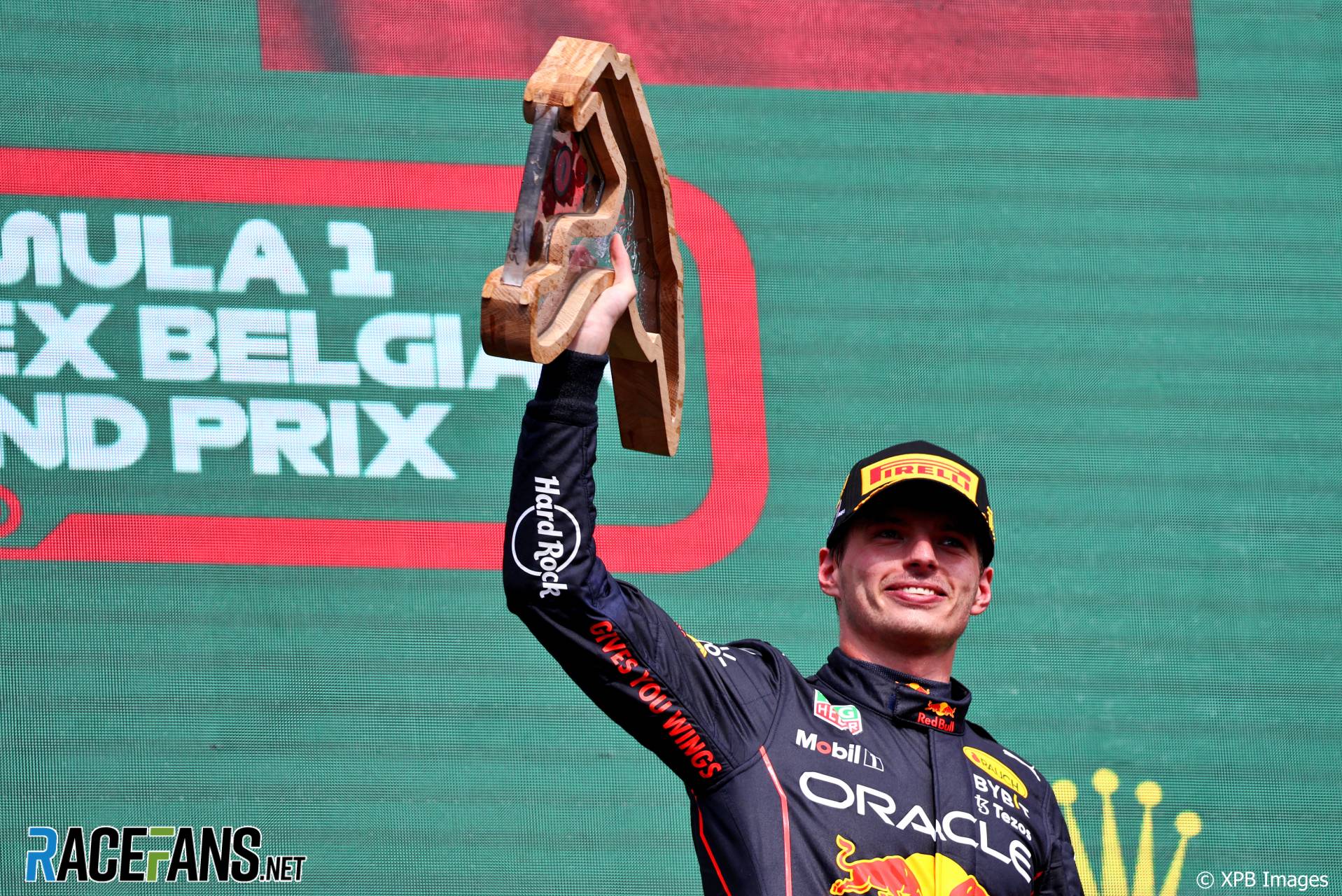 Max Verstappen secured his most dominant victory of the 2022 season by comfortably winning the Belgian Grand Prix from 14th on the grid.

The championship leader made his way quickly through the field in the early laps and gained the lead of the race from Carlos Sainz Jnr before half the race had been completed. Sergio Perez passed Sainz to take second place, the Ferrari driver going on to complete the podium in third.

Clear blue skies and a warm track awaited the field as the grid set off on their formation lap. On pole position, Sainz was the only driver in the top 10 to opt for the soft tyres for the start of the race.

When the lights went out, Sainz used his soft tyres to keep the lead, while Perez got a poor start and fell behind Fernando Alonso and the two Mercedes of Lewis Hamilton and George Russell. Alonso and Hamilton ran side-by-side into Les Combes, but the Mercedes driver left his rival little room at the apex and the pair collided, pitching the rear of Hamilton’s car in the air and causing an oil leak on his Mercedes.

As Hamilton slowed, the field behind him scrambled to get past until he was told to pull off the circuit. Sainz led from Perez, Russell and Alonso, until the Safety Car was deployed on the second lap when Nicholas Latifi spun on the exit of Les Combes and collected the innocent Alfa Romeo of Valtteri Bottas, sending both out of the race.

Charles Leclerc had to pit under the Safety Car due to a visor tear-off lodging in his right-front brake duct. That dropped him back towards the rear of the field.

Despite locking up at the Bus Stop chicane before the restart, Sainz was able to keep the lead as the race restarted on lap five. Over the next few laps, Verstappen clinically made his way up the order until he gained third place behind team mate Perez.

All drivers began to complain of excessive tyre degradation, leading to Sainz pitting from the lead at the end of lap 11 to switch to mediums, rejoining in ninth. With the Ferrari out of the way, Verstappen slipped past his team mate along the Kemmel Straight.

Perez pitted before his team mate and, when Verstappen eventually boxed for medium tyres at the start of lap 16, he rejoined just ahead of Perez, within four seconds of leader Sainz. It took just two laps for Verstappen to catch and overtake Sainz along the Kemmel Straight to complete his charge from 14th on the grid to the lead before half-distance.

With Verstappen now ahead of him, Sainz fell into the clutches of Perez behind. Starting lap 21, Perez cruised up behind the Ferrari and breezed by Sainz into Les Combes to make it a Red Bull one-two out on the track. Ferrari brought Sainz into the pits for hard tyres soon after to take him to the end of the race, with Perez following suit two laps later. Verstappen also made his second and final stop for mediums at the end of lap 30, rejoining with a lead of eight seconds over his team mate.

Verstappen grew his lead as the laps ticked away. In the closing stages, Ferrari opted to pit Leclerc from fifth to attempt to go for the fastest lap, despite Leclerc expressing his desire not to “risk” his position. Ferrari pitted him anyway and he rejoined behind Alonso in sixth position.

After 44 laps, Verstappen took the chequered flag to take the win and extend his championship lead even further, 17 seconds ahead of Perez with Sainz completing the podium nine seconds later. Russell finished fourth, 2.2 seconds behind Sainz.

Leclerc passed Alonso on the final lap but failed in his fastest lap attempt, crossing the line in fifth. However, the stewards announced that Leclerc had broken the pit lane speed limit by 1km/h and instantly handed him a five second time penalty. That dropped Leclerc back behind Alonso in the classification.

Esteban Ocon took seventh place in the second Alpine ahead of Sebastian Vettel’s Aston Martin and Pierre Gasly’s AlphaTauri. After holding off a train of cars over the final third of the race, Alexander Albon took the final point for Williams in tenth.