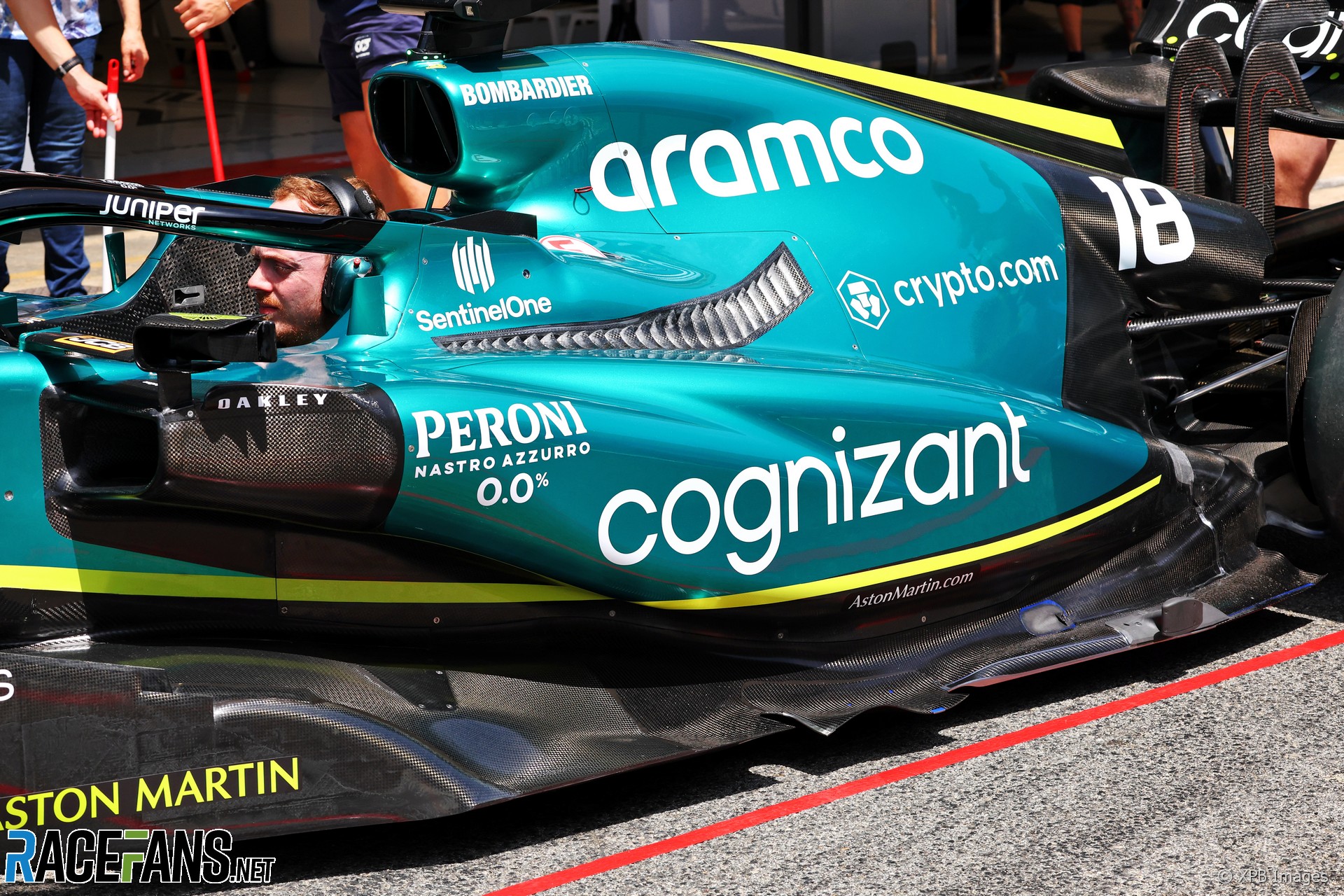 The new regulations for Formula 1 this year created a unique opportunity for ten very different looking cars to line up on the grid in Bahrain at the start of the season.

Each team had their own design philosophy and took different design approaches to the new set of regulatuions. However, over the course of the season, some of these concepts have shown clear advantages and many of the cars on the grid have started to converge into a handful of particular design philosophies.

The three main sidepod design philosophies that had emerged at the beginning of the season were the inwash, downwash, and outwash concepts.

Mercedes and McLaren had notably taken the inwash concept where, from the top view of the car, the rear of the coke bottle section narrows inwards into the rear bodywork without a very aggressive undercut on the sidepods, making for a rather short sidepod. The inwash concept is designed for the air to hug the bodywork around the sidepod and be directed over the top of the diffuser.

By reducing the frontal area of the car, the concept should allow for lower drag overall. While Mercedes has created a radical version of this concept with their ‘slimline’ sidepods and various fairings to help guide airflow, McLaren has since moved away from this philosophy and embraced the downwash concept.

With the rapid pace of the RB18, and as the team has seemingly got ‘porpoising’ under control, many other the teams have switched their development paths to the downwash concept. McLaren made a gradual transition of their concept with a more downwash-oriented update introduced during the Spanish GP and then a clear downwash concept sidepod update at the French GP.

Notably, Aston Martin introduced a heavily downwash oriented concept at the Spanish Grand Prix that was quickly dubbed as the ‘Green Red Bull’ by the media and the fans. While the Silverstone-based team does have a history of making cars that look similar to others on the grid (recall the ‘Pink Mercedes’ of 2020), this was not a simple undertaking as the team would have had to make major changes in the layout of the components house inside the sidepod and change aerodynamic devices up and downstream to make the package work well.

Williams has also taken the downwash approach in the hopes to help ease their porpoising by shifting the aero balance from being mostly dominated by the underfloor, to generating a larger portion from downforce-generating surfaces on the upper bodywork. This change would theoretically allow the team to run the car a bit higher and softer, reducing the chance of instigating ‘porpoising’ in the high-speed sections of the track. While Williams has not made a giant leap towards the front of the grid, the car has been noticeably more stable. 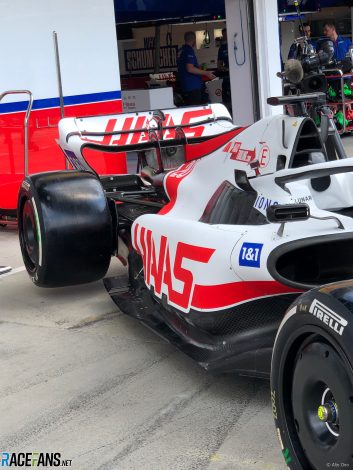 Despite the lack of recent wins, mostly due to poor strategy calls or driver errors, the fastest car on the grid still seems to be the Ferrari. The Scuderia opted for the outwash concept, pushing the tyre wake as far wide as possible using their sidepods and channelling some of the air through its scalloped sections over the sidepod, the rest being recovered from the tyre ‘squirt’ at the rear of the car.

While Haas had started with a very similar concept at launch, a new update package at Hungary brought the design of the two cars much closer together. At Hungary, Haas Team Principal, Gunther Steiner, admitted the team had taken inspiration from Ferrari for its upgrades. “We are closer to the Ferrari, so obviously we’re going to see what Ferrari has done and copy that one,” he said.

Aston Martin were the first team to incorporate the ‘double T-tray’ concept at launch. While arguably borderline from a legality point of view, it was an interesting interpretation of the rules and was likely intended to form a vortex to run along the upper junction of the venturi tunnels of the floor.

The core of a vortex has very low pressure, and when strategically placed, it can lead to a localised low-pressure region. By lowering the pressure under the car, it furthers the ground effect caused by the floor, thus increasing downforce.

Ferrari swiftly adopted the same bib wing design and now other teams on the grid including Red Bull, Mercedes, and Alpine have incorporated this feature.

Interestingly, Aston Martin removed this feature from their car since their Barcelona upgrade. This may have been a measure to reduce porpoising or they simply did not see the performance improvement they expected from that feature.

With the introduction of the new regulations that allowed for the return of cooling louvres on the sidepods and engine cover area, there were three major design philosophies between the teams at launch.

Ferrari, Alfa Romeo and Aston Martin took the approach of filling up most of the top surface of the sidepod with cooling louvres, while Red Bull, Alpha Tauri, and Williams went for not having any on the sidepod with only a small opening on the bodywork, just rearward of the driver. The other teams, Haas, Alpine, and McLaren, fell somewhere in between utilising both areas but not leaning too hard either way. Mercedes is the one outlier of this as their ‘slimline’ sidepod concept made for some quirky geometries and had two openings on the bodywork.

While both Red Bull-powered cars have largely maintained their original cooling design concept, and use centreline-cooling by exhausting the hot air out of the back over the beam wings, Williams have changed their sidepod and engine cover concept, moving their cooling louvres quite a ways backwards and making them larger as well.

Haas originally had interesting cooling louvres on the spine of their cars leading to a detached shark fin, but in their latest update, they have removed this feature and extended their cooling apertures on the sidepods to be more in line with Ferrari. McLaren and Alpine have also moved in the same direction, further increasing the cooling louvre count on their sidepods. Alpine´s concept is particularly striking as the cooling louvres found on the engine covers are quite large as well.


The enlargement of the cooling apertures really highlights how far ahead Mercedes truly are with their cooling solution. The small sidepod inlets, with only a few cooling louvres, and the packaging so tightly packed, no other team has managed to copy such a concept. The Red Bulls and AlphaTauris are ´best of the rest´ as they have managed to keep cooling louvre sizing down and perhaps indicate the lower cooling requirement of the Honda-based Red Bull power units. 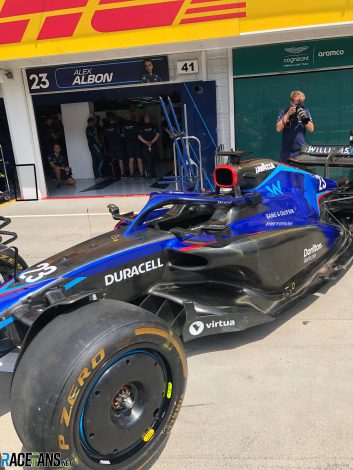 Finally, it became clear at the first race in Bahrain that most teams were running quite a bit over the minimum weight this year. Teams were scrambling to find ways to reduce the overall weight of the car and teams went to great lengths to find every gram they could reduce.

A striking aspect of this year’s grid is the amount of bare carbon teams are running. Williams is by far the most extreme example of this with their most recent spec in the Hungarian GP lacking paint on the top two front wing elements, the ‘black’ lines on the nose, the majority of their survival cell, almost all of their sidepods, and their rear wing.

Likewise, McLaren has gone bare carbon on the engine cover, and large parts of the sidepods, survival cell, and nose. Even Mercedes has also stripped back their paint on the rear wing, underfloor, and the bottom half of their survival cell, originally all painted black. All the teams, from the front to the back of the grid, have large visible portions of their car in a bare carbon format.

Alto is a motorsport journalist and graduated from Cranfield University with a MS in Advanced Motorsport Mechatronics. He has previously covered a range of...
Read more about Alto Ono, find all their articles and get in touch with them

7 comments on “Tracking the trends of car development in 2022”