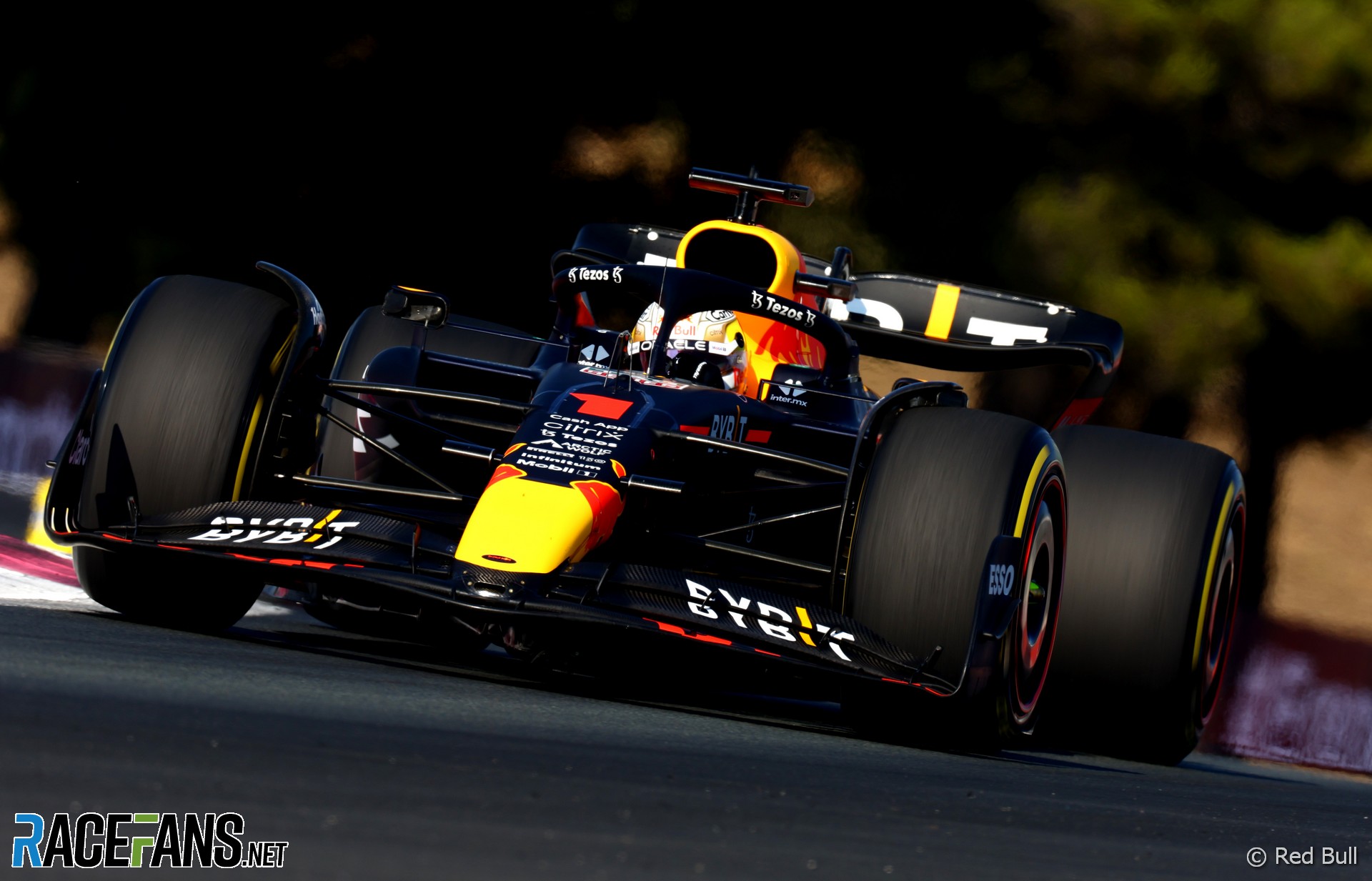 After seven wins from the first eleven races of the 2022 Formula 1 season, Red Bull arrived at Circuit de Paul Ricard having gone two consecutive race weekends without a grand prix victory for the first time all year.

After a stretch of six race wins from Imola to Montreal, losing to Ferrari in back-to-back rounds was a sign to some that Red Bull had finally been caught by their rivals. But after having no answer to Ferrari’s pace during the race in Austria, Max Verstappen showed no signs of worry – simply explaining that the gap in performance was down to Red Bull taking a wrong turn on set up early in the weekend.

Heading into the French Grand Prix weekend around a fast, flat and technical circuit with copious run-off, there was perhaps no better venue to test just how good Ferrari’s package truly is halfway through the season. After the first day of running, there are reasons to think that both of the two top teams should be anxious of the other.

Looking at the times sheets, it’s easy to assume that Friday could not have gone much better for Ferrari. Fastest with Charles Leclerc in first practice, followed by Carlos Sainz Jnr leading a one-two in the second session. Verstappen’s best effort in the second hour was half a second away from Sainz’s best. But could he have gone even faster?

Sainz set his quickest time just after the half hour mark in the session on his second push lap on his set of soft tyres. Leclerc did the same shortly after. Verstappen’s radio during the session suggests he also wanted to try a second push lap, but Red Bull were concerned about losing too much of the final half of the session in which they would carry out their high fuel runs.

“We’re not going to try again, another lap?,” Verstappen asked race engineer Gianpiero Lambiase after being called into the pits.

“Yeah, but I don’t want to start P3 or P4,” Verstappen later replied.

Verstappen’s anxiety over his one lap pace could reveal a couple of things. Clearly, the Red Bull driver considers Leclerc as strong opposition for pole position on Saturday, but with Sainz guaranteed to be starting outside of the top 10 on Sunday – and likely from the back of the grid – Verstappen appears to feel the Mercedes drivers are quick enough to knock him off the front row.

As formidable as Ferrari may appear to be over a single lap, the long-run pace tells a different story. Across the high-fuel runs the top five cars all carried out on the medium tyres over the final third of the session, Verstappen’s average lap time of a 1’37.724 was comfortably quicker than the rest. Sainz’s average time was well over a half a second a lap slower, while Leclerc’s long run average was just a little slower than George Russell’s.

This comparison does not show the full picture, given that Verstappen only clocked four representative timed laps on his ‘race simulation’ run and Russell just three. Meanwhile, both Ferraris ran at least 10 timed laps on their simulations. However, even the Ferrari drivers recognised Verstappen’s impressive race pace.

“Max was very quick on the on the medium tyre,” admitted Sainz after the session. “I was quick at the beginning and slow at the end. So all that speed that I had in the short run, I want to make sure that it translates into the long run.”

Leclerc agreed with his team mate. “Red Bull is doing something different to us on Friday,” he said. “Max seems to be particularly quick on the high fuel.”

But Verstappen was not getting ahead of himself after just two hours of practice. “I think the long run is better but the tyres are running really hot so it’s difficult to judge where you really are,” he explained.

“Overall, this track is tough on tyres, I think we all needed a few more laps to have a more accurate look at the long runs.”

If Verstappen’s eagerness to try a second push lap on his soft tyres was in any way influenced by concerns over Mercedes potentially acting as spoilers in Red Bull’s fight against Ferrari, then those worries will have been alleviated by what Mercedes’ showing on Friday. While it was easy to pick out Paul Ricard as a potential strong track for the W13 prior to the weekend, Russell had to admit that the team were more concerned about preventing anyone else getting between them and those ahead.

“I think our high-fuel pace was probably better than our low-fuel pace,” Russell explained. “We need to optimise tomorrow to make sure there’s no midfield cars between us and the front four.”

So can Mercedes be written off as having a chance at being in the mix for pole position on Saturday? “An outside shot is probably the way to put it,” replies Russell.

“We were probably a little bit further off the pace than we would’ve hoped. Work to do tonight and back at the factories.”

While Mercedes may have been underwhelmed with their performance, one team that definitely was pleased with their showing was AlphaTauri. Having brought a raft of upgrades to the car for this weekend, the team ran them on Pierre Gasly’s car in the first session, before installing them onto Yuki Tsunoda’s car in the second. At least for Gasly, the new parts brought back kind of performance he enjoyed so often in 2021, finishing the sessions in fifth and seventh place.

“We brought some aerodynamic updates to this event and ran those with Pierre all day, keeping Yuki on the old car in FP1 to allow an across car comparison,” explained the team’s chief race engineer, Jonathan Eddolls.

“Based on the data gathered in FP1, the updates were working as expected and delivering a good step in terms of performance. We therefore migrated Yuki’s car to this configuration for FP2 and continued the optimisation of the setup around the new package. Short run performance has clearly taken a step forward and we look forward to being able to fight again within the midfield – something we had been struggling to do at the last couple of events.”

The summer sun may, mercifully, not have produced record ambient temperatures as seen across Europe earlier this week, but the track certainly received a baking in the direct sunlight. With the final two days of action expected to take place in much the same kind of conditions, Pirelli’s Mario Isola believes that qualifying could see many of the front runners trying to use a double push lap strategy to help them preserve their harder sets for Sunday.

“We had track temperatures that peaked at 56 degrees today – which is still a few degrees off our all-time record from Malaysia in 2016 – but despite these high temperatures, all the compounds performed well,” Isola said.

“It’s clear that the soft is going to be a compound used just for qualifying, and it was interesting to see that a second fast lap was possible after cooling down the tyres, thanks to a good level of grip and performance recovery. This potentially enables drivers to use fewer soft tyres in qualifying tomorrow, which could help them to save medium and hard sets for the race.”

Looking at the front of the field, only Leclerc out of the two Ferrari drivers will have a chance of taking the fight to Verstappen on Saturday. But despite the apparent advantage the Red Bull appears to hold on race pace, Leclerc considers Ferrari as having all the tools to beat them for a third race in a row.

“Max seems to be particularly quick today on the on the high fuel, so I don’t know how much fuel they were running,” Leclerc said. “That is a bit of a question mark.

“I believe again that the pace is in the car, we just need to focus on ourselves and if we do the perfect weekend, will be fighting for the win.”

RaceFans is run thanks in part to the generous support of its readers. By contributing £1 per month or £12 per year (or the same in whichever currency you use) you can help cover the costs of creating, hosting and developing RaceFans toda and in the future.