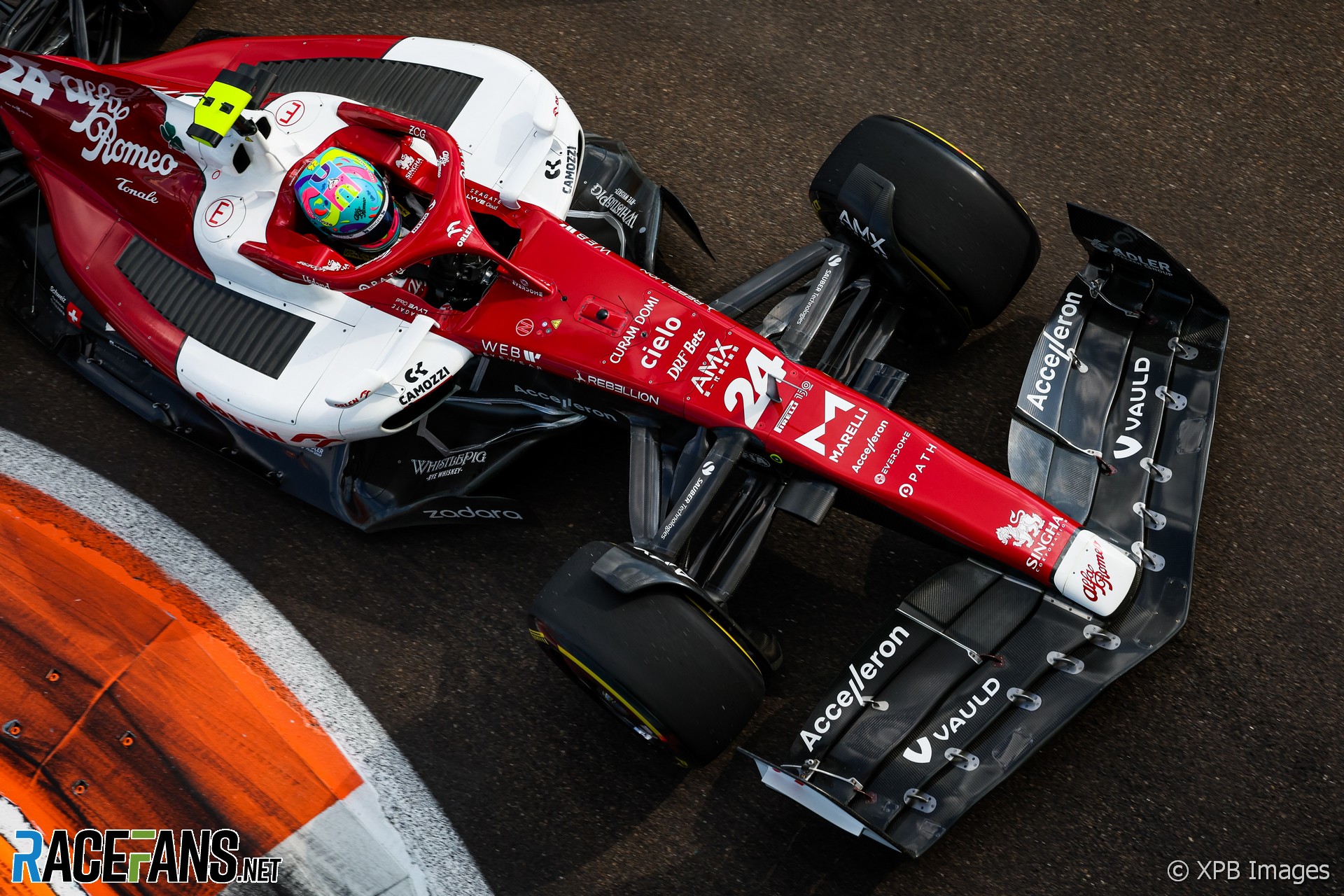 Having returned to Formula 1 in a branding deal with Sauber in 2018, Alfa Romeo re-committed to the team 12 months ago. The Italian brand has every reason to be pleased with the results since.

The team lies sixth in the championship halfway through the season, on course for its best result in 10 years. It last finished this high in 2012, when Kamui Kobayashi and impressive sophomore driver Sergio Perez took their Ferrari-powered machine to four podium finishes.

Alfa Romeo’s presence in Formula 1 is unlike many of its rival manufacturers. The likes of Ferrari, Aston Martin and Alpine operate their own F1 teams, whereas Alfa Romeo brands Sauber’s operation.

This more cost-effective approach to participating in Formula 1 makes better business sense than the huge costs involved in owning a team, Alfa Romeo CEO Jean-Philippe Imparato believes. “I have probably one of the best business models in this world of Formula 1,” he told RaceFans in an exclusive interview.

Only a few years ago Sauber’s future in Formula 1 looked precarious. But the introduction of the budget cap last year has forced F1’s richest teams to scale back their spending, helping the likes of Sauber to compete.

Even with inflation rocketing in the second year under the cap, leading teams to agree a deal this month to address it, Sauber remains confident it will avoid over-spending. Alfa Romeo can therefore feel confident it gets a solid return on investment in F1 compared to those manufacturers which own teams.

“Motorsport for anybody is a fixed marketing expense,” Imparato explains. “So we designed a kind of business model of our colleagues that brings us to a reasonable level of performance and a good ROI.

“So if I compare the ROI of Alfa Romeo to any other guys who say ‘I’m doing a real Formula 1’ – okay, but you are losing money, my friend!”

Alfa Romeo’s decision to continue its presence in F1 accompanies the latest in a series of overhauls to its road car business. Imparato arrived from Peugeot in January last year and has set about refocusing the brand and refreshing its line-up of road cars.

“In terms of priorities for me since I [took] charge of Alfa Romeo at the beginning of last year is to bring to the market quality behaviour and way of acting for this fantastic brand which is 112 years old.

“The first one, quality, was probably the first message we have. The second one is that to be sustainable means profitable. We achieved that in 2021. Then it’s to spend some time – we did it last year as well – to write a strategic plan for 10 years.”

“Alfa Romeo don’t want to change strategy any more every six months,” Imparato explains. “So I wrote a 10-year plan that is validated, locked and funded. And each and every year we review that in order to complete, secure and lock the operation.”

Many Formula 1 fans will already be familiar with Alfa Romeo’s television adverts for its road cars featuring former driver Kimi Raikkonen. The manufacturer will have many more new models to promote using its F1 team over the coming years.

“We will launch a new product, have a serious product event, each and every year from now until 2030,” says Imparato.

Electrification is a key focus of Imparato’s forthcoming product range and he sees F1 as an important means of promoting Alfa Romeo’s progress in that respect. The logos of their new Tonale SUV already appeared on the engine cover of the team’s C42 at the Azerbaijan Grand Prix.

“Alfa Romeo will sell electric cars in 2027, with the right level of performance and road-handling obviously, but we go carbon-zero,” Imparato explained. “We started which Tonale at minus 40% grams of CO2 compared to the previous situation.”

Imparato is eager to get ahead of the game when it comes to electrifying Alfa Romeo’s range. “The group said in 2038 [we’re] carbon neutral. If you want to be carbon neutral by 2038, before 2030 all your brands must be at zero,” he says.

Again, he sees the team’s F1 presence as a useful means of promoting this, as the sport plans a switch to sustainable fuel and targets a reduction in its own carbon emissions to net zero by 2030.

“In terms of choices of investment we will be at zero on the business side but as well on the choices we make in terms of sponsorship. That means I highly appreciate the fact that Formula 1 is switching to a sustainable way of acting.

“They are working on a very good path in terms of sustainability. And for me, it’s consistent with the idea we have in terms of joining a world that will be sustainable. We want to give to our kids a world that is, I would say, protected on that topic.”