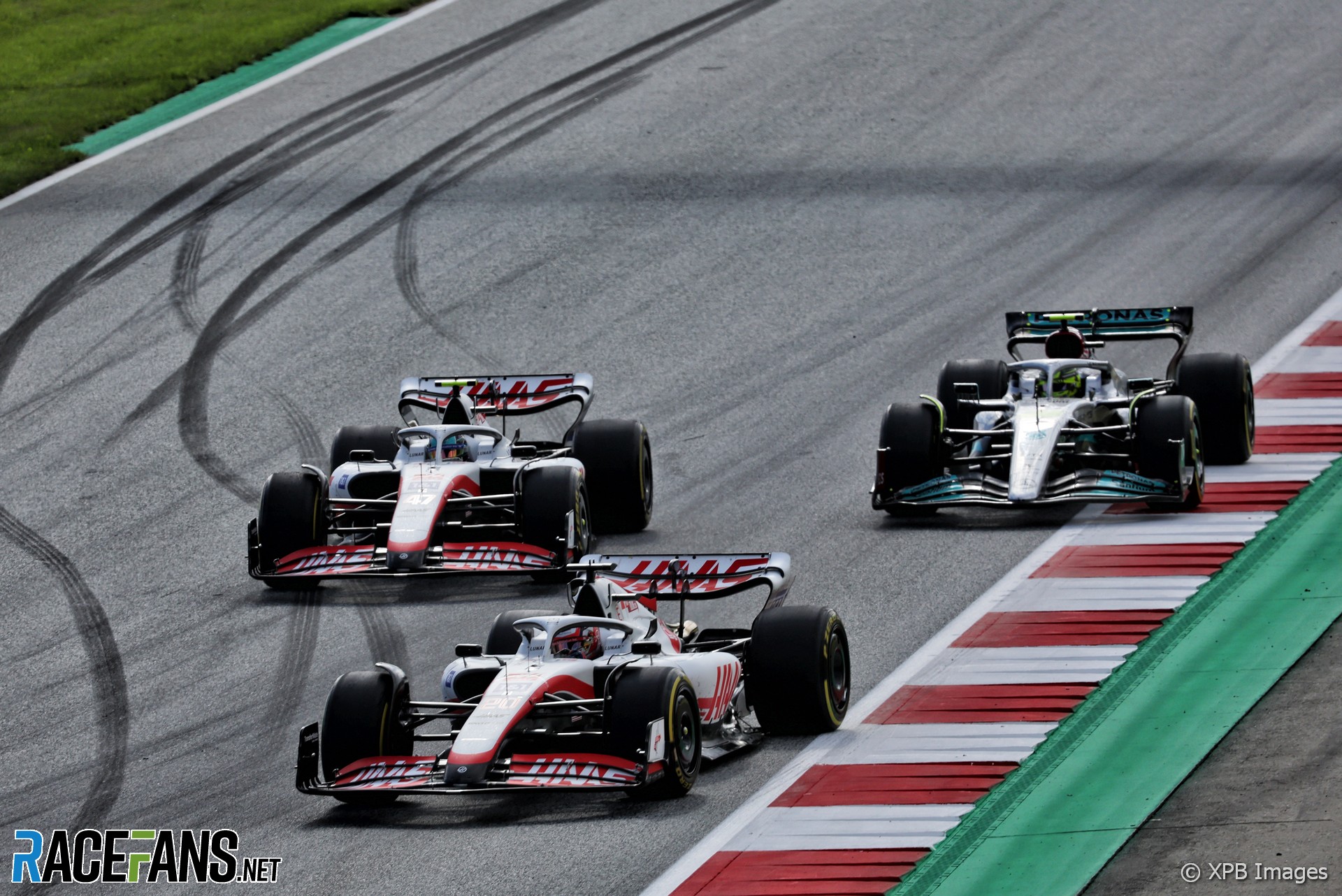 Mick Schumacher felt Haas compromised their performance during Saturday’s sprint race in Austria by not swapping the running order of their drivers.

The Haas drivers ran sixth and seventh at the start, Schumacher trailing Kevin Magnussen. From an early stage in the race Schumacher urged race engineer Gary Gannon to arrange for his team mate to let him by.

After several such messages, Schumacher was told no swap would be arranged. In the final laps of the race Schumacher lost the final points-scoring position to Lewis Hamilton.

“I think I had the pace to be in front,” a disappointed Schumacher told media after yesterday’s race. He first suggested the team let him by Magnussen as the pair pursued Esteban Ocon in the opening laps. “That’s something to look really for my understanding why we didn’t switch positions, because I felt like I could have attacked Esteban.”

Magnussen felt the two Haas drivers could have swapped positions without making them more vulnerable to the pursuing cars. “I think it was do-able without any doubt because I had to, halfway down the straight already, lift to [not] get in trouble with braking.”

After Sergio Perez passed the pair of them, the Haas drivers spent several laps repelling Hamilton. “In some ways I was saving [Magnussen] from the attack from Lewis,” said Schumacher. At one stage he fell away from his team mate and was no longer able to use his DRS, prompting him to ask the team to urge Magnussen to drop back within range. “I was actually hoping that he would drop back.”

However Schumacher believed he could keep Hamilton at bay until his rival finally broke through with three laps to go.

“I knew it was going to be tough especially when my tyres kind of wore off,” said Schumacher. “But I felt that his tyres were also not in great shape.

“Also his energy level didn’t seem great. So I was actually hopeful that I could come back but then obviously his energy recovered and my tyres didn’t.”

Despite his frustration over the team’s strategy, Schumacher was thrilled by the chance to fight with drivers from two of the top teams. “It’s quite incredible, to be able to be fighting with Mercedes and Red Bull,” he said, though he added: “I think there was more in it.”

Schumacher reported contact from Perez immediately after the start of the race, but his team told him his car was in good condition:

While under pressure from Perez, Schumacher told his team more than once that he was losing pace because he was running behind Magnussen. The team kept the drivers in the same order, and Perez eventually passed Schumacher, who exclaimed in frustration:

As Hamilton drew within range of Schumacher, he again asked for the chance to run in front of his team mate. This time the team gave him a clear refusal:

Despite the team’s earlier messages, Schumacher told them again he was quicker. For several laps he successfully repelled Hamilton, but after slowing at the apex of turn three as he foiled one attempt, he fell too far behind Magnussen to be able to use his DRS.

As the threat from Hamilton loomed ever greater, now Schumacher changed his request to Haas, asking Magnussen to back off so he could draw back within DRS range. The team discussed it, but not in time to prevent Hamilton passing Schumacher:

Schumacher finished out of the points, and made his dissatisfaction clear to the team. Team principal Guenther Steiner, however, was pleased with the result:

18 comments on ““I don’t agree”: How Schumacher lobbied for team orders throughout sprint race”