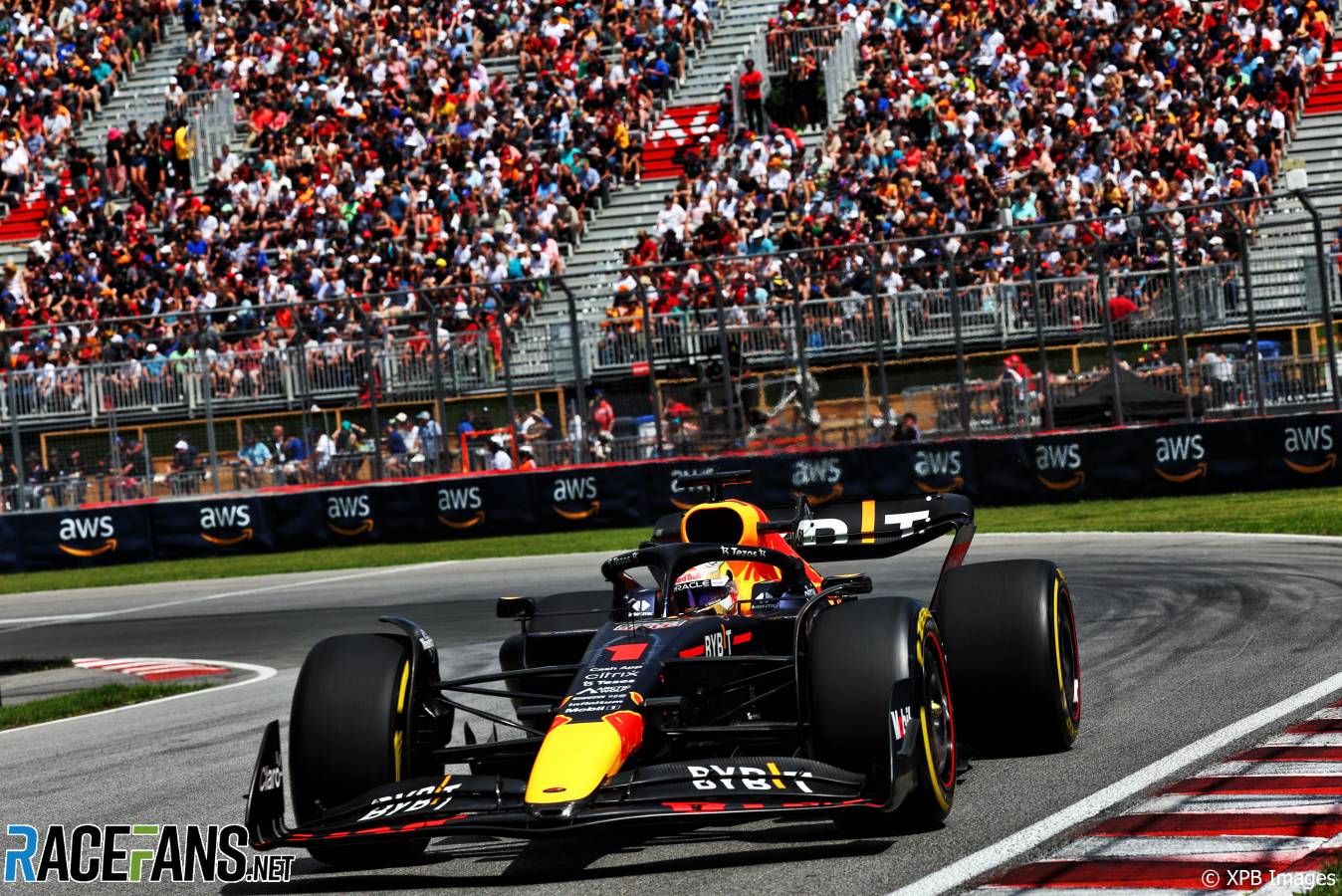 Max Verstappen ended Friday fastest of all after the second practice session for the Canadian Grand Prix.

After topping the times sheets in the earlier session, Verstappen improved on his own best time to set the overall quickest lap of a 1’14.127, just under a tenth of a second faster than Charles Leclerc.

The session had barely begun when Kevin Magnussen had to take immediate avoiding action when Aston Martin released Vettel straight in front him in the pit lane. The incident will be investigated by the stewards after the session.

After going fastest of all in the earlier session, Verstappen immediately went even faster right out of the pits, setting a 1’14.792 on the medium compound tyres. Leclerc was almost half a second off the Red Bull in second, before Alonso moved ahead of the Ferrari on the soft tyres to go behind Verstappen.

Sergio Perez appeared to be struggling with his braking points, locking up into the turn ten hairpin before doing the same into turn one, running off track and missing the first two corners. Pierre Gasly also misjudged his braking for the final chicane, and missed the corner, but failed to stay to the left of the bollard on the escape road as per the race directors’ instructions. He will also be investigated after the session.

Valtteri Bottas fell into anti-stall and was called into the pit lane to abandon a run. He was soon sent back out, but radioed that the problem remained and made his way back to the garage.

The Virtual Safety Car was briefly deployed due to a discarded drinks can rolling along the circuit at the hairpin. A local marshal soon collected the debris – to the cheers of the Canadian fans in attendance – and the session was soon resumed.

A miscommunication between Alfa Romeo and Zhou Guanyu led to Zhou holding up Daniel Ricciardo on the way into turn three, causing the McLaren driver to abandon his flying effort. Vettel became the next driver to overshoot the chicane and, like Gasly, failed to rejoin the circuit correctly, also earning him a post-session trip to the stewards.

With ten minutes remaining in the session, all 20 cars bar Bottas’s Alfa Romeo were on circuit, with everyone focusing on long runs. Lewis Hamilton complained his Mercedes was “undriveable”, giving up on a run after oversteering off the circuit at turn nine.

There were no major improvements in the final minutes of the race, leaving Verstappen fastest of all with his earlier best time of a 1’14.127. The two Ferraris of Leclerc and Sainz ended the day second and third, respectively, just under a tenth and two tenths slower than the championship leader.

Vettel put Aston Martin fourth fastest, just ahead of Alonso and Gasly’s AlphaTauri. Russell was the quickest of the Mercedes in seventh, ahead of the McLaren pair of Norris and Daniel Ricciardo. Esteban Ocon rounded out the top ten for Alpine.