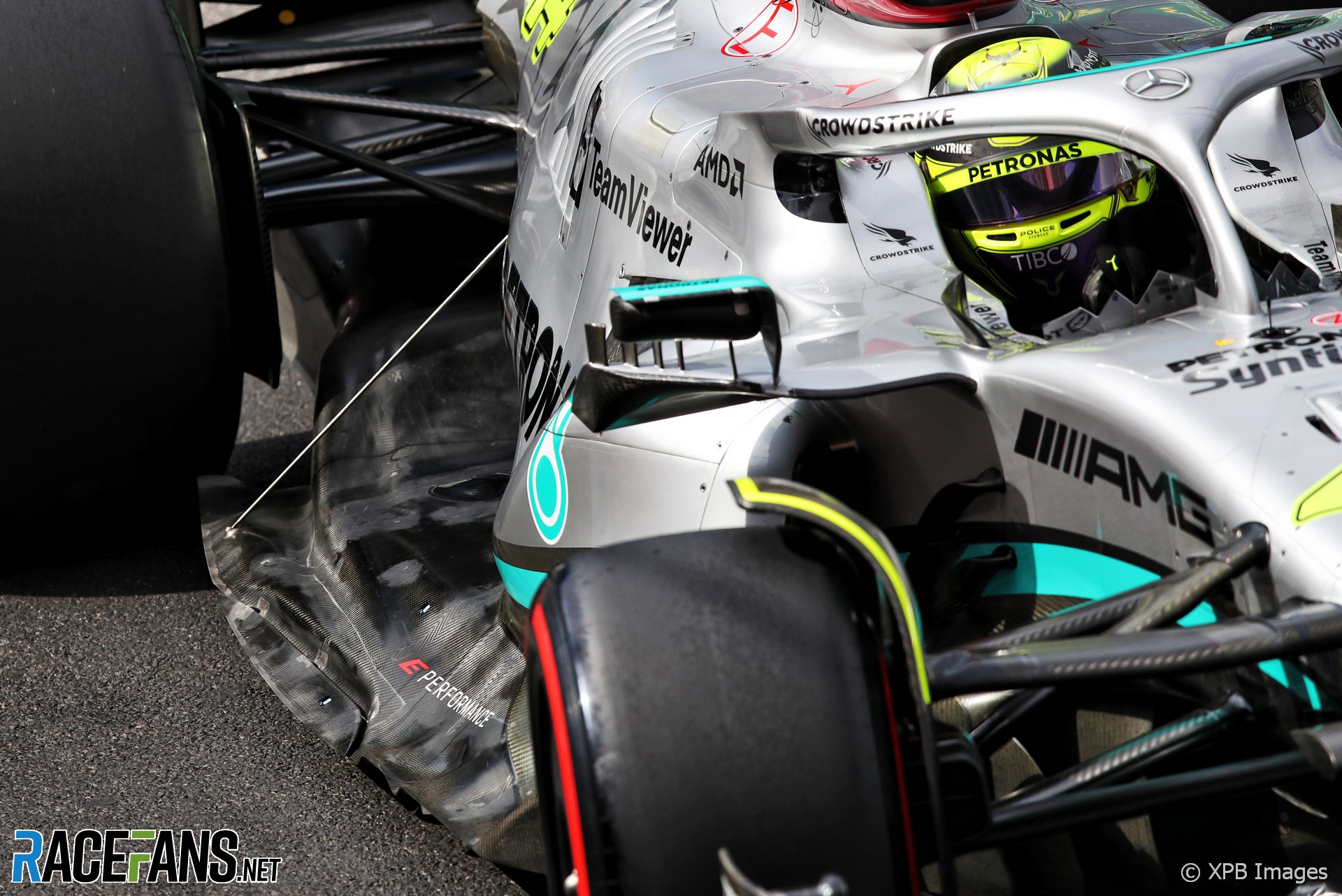 Mercedes’ porpoising is so severe the team’s physiotherapists are not always able to ease the pain their drivers feel after driving the car.

Lewis Hamilton and George Russell have complained about the punishment they suffer in the W13, which has regularly suffered from the porpoising phenomenon most teams have become familiar with this year.

The long, bumpy straights on the Baku City Circuit has exacerbated the problem for several teams this weekend. Hamilton said he was “a bit sore” after covering 46 laps of the track yesterday.

“We are facing the same issues when the car is not quick and that is that we have porpoising,” Mercedes team principal Toto Wolff explained. “Others like Ferrari have it too, here even a bit worse.

“At different places of the track we are bottoming out badly which affects our aerodynamics and affects our straight-line speed greatly. As a consequence the ride is not very good and this can cost several tenths and yesterday we were losing a second on all straights to Ferrari and Red Bull.”

Russell has repeatedly warned drivers cannot sustain the levels of porpoising he has experienced. Wolff said they need to understand why some teams have been able to manage the problem much more successfully that others.

“We are seeing cars that don’t have the issue and then others that have it worse. Clearly I can talk for our two drivers they are having issues.

“It goes to a point that even a physio can’t fix it sometimes. So we need to see how that develops and understand also why it’s much tougher in some cars than in others.”

Ferrari team principal Mattia Binotto, whose cars were also seen porpoising in practice yesterday, says his team have been able to manage the problem better since the updates they introduced for their car in Spain.

“Yesterday we were certainly bouncing and bottoming,” he said. “I think that is the consequence of the fact that we are going softer and softer, lower and lower.

“It’s great to see that the car maybe can afford it without losing too much performance both on the straight and on the corners. It’s always a compromise.

“I think that the recent package introduced in Spain is a step forward compared to the past in terms of bouncing phenomenon and behaviours. We are looking as well in the future for better improvements and today we are bouncing but I don’t think it’s an limitation to our performance.”

Binotto doesn’t believe there is a risk the new technical rules F1 introduced this year has created a generation of cars which are becoming too uncomfortable to drive.

“Overall if we judge Formula 1 I don’t think they are less comfortable cars to drive in terms of formula motorsport,” he said. “I think that it’s a challenge for the drivers, no doubt, but still I think those cars are quite comfortable to drive.

“It’s a challenge, a technical challenge. If we look at ourselves, we have made some progress. I think in the future we can do more progress.

“So certainly it’s too early to judge and I’m pretty sure we will find a solution mid-term, long term. It’s a challenge as all the others so I think we need to accept it’s certainly something which we need to better understand to improve but happy to do that.”