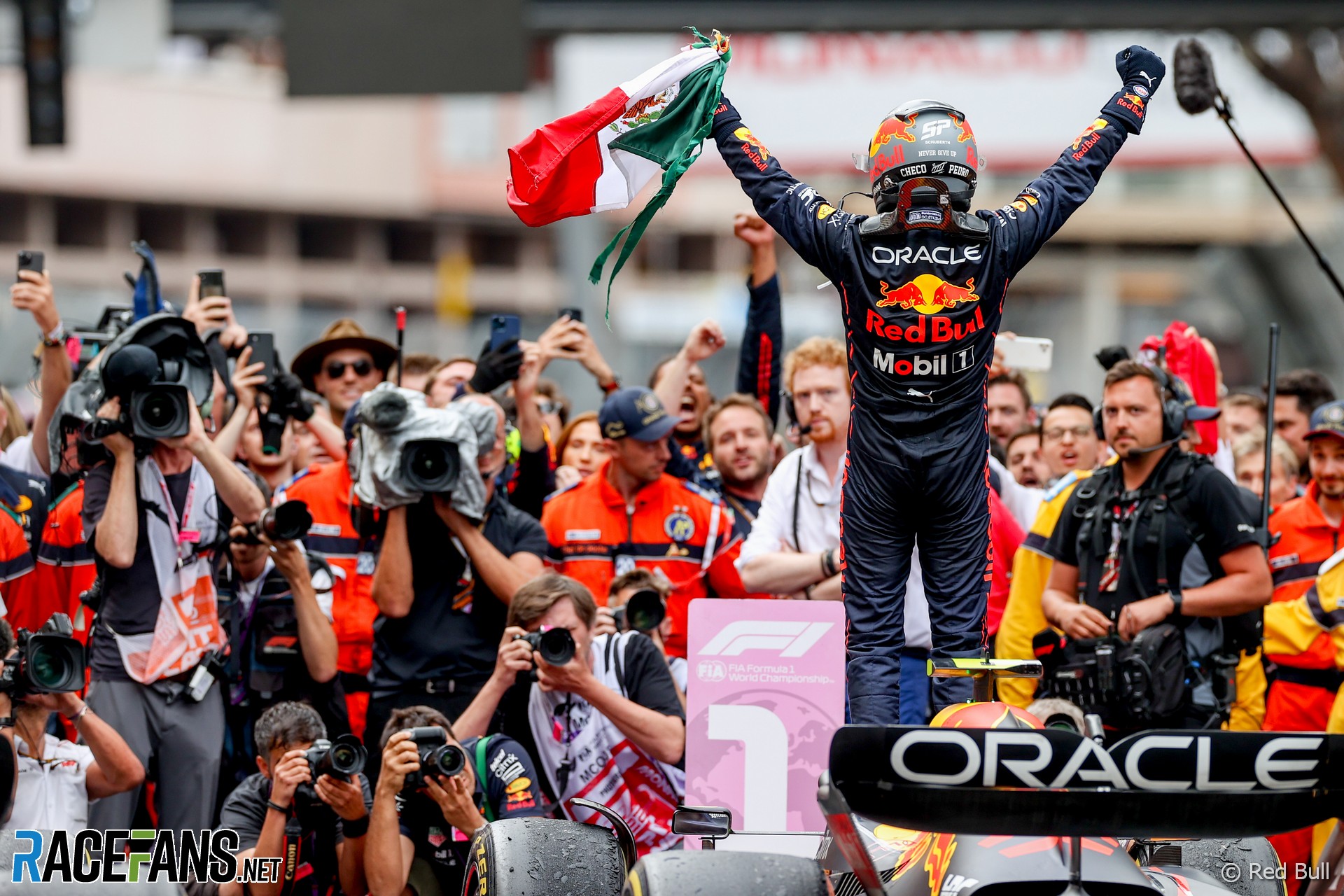 Last year’s Azerbaijan Grand Prix winner Sergio Perez returns on a high after a contract extension and win in Monaco. Will he win again at a track where he has usually thrived?

Plus, will F1 avoid a repeat of the tyre troubles which blighted last year’s race? Here’s the top talking points for the weekend ahead.

Will Perez put himself firmly in the title fight?

Perez has fond memories of Baku, having secured a podium for Force India around the street circuit in 2018 and claiming his second career victory in Azerbaijan last year following the late puncture for team mate Max Verstappen. Baku saw Perez’s strongest showing after joining Red Bull at the start of 2021, makes the most of a strong start to springboard himself up to fourth, passing Charles Leclerc and then over-cutting Lewis Hamilton in the pit stop cycle to run second behind Verstappen.

Although Perez struggled at many points through his first year with Red Bull to keep in touch with Verstappen’s championship-contending pace, 2022 has been a thoroughly different story. While Verstappen has been clearly the better performing driver over the course of the season so far, Perez has been far closer to his team mate and sits just 15 points back in the drivers’ championship after beating him and both Ferraris to the victory last time out in Monaco. A gap which might be slimmer had Red Bull not imposed orders on him on more than one occasion during the Spanish Grand Prix.

Perez may need to build up some more evidence before his credentials as a potential championship contender are no longer in question, but the best way for him to do that will be through another strong weekend in Azerbaijan. If he has one, then Perez could make the fight for this year’s world championship a three-way contest.

Which side of Mercedes’ Jekyll & Hyde car will appear?

The Spanish Grand Prix looked set to mark a pivotal moment in Mercedes’ season, with the first major upgrade package for the W13 resulting in arguably the team’s strongest performance in a race weekend so far in 2022 – at least in terms of how closer they were to Ferrari and Red Bull.

However, hopes that this would make the end of the team’s porpoising problems appeared to be dashed in Monaco, where the idiosyncratic street circuit caused a different kind of headache for both Hamilton and George Russell as the Mercedes rode rigidly over the many bumps. Hamilton described the sensation as like a “rollercoaster ride” and as well as being uncomfortable, it also limited the car’s performance. Mercedes drifted further away from their rivals than they had been in Barcelona.

Heading into Azerbaijan, it’s tough to tell which way the coin will fall for Mercedes in Baku. As another street circuit, there is a distinct risk that Mercedes’ stiff car will again not gel around roads built primarily for transport rather than racing. However, Baku is also anything but a typical street circuit, with some extremely high-speed sections and an exceptionally long back straight. With Mercedes’ Barcelona upgrades aimed more at improving the team’s performance in high speed rather than low speed corners, it could be that the final sector plays to the W13’s strengths this weekend.

Time to rein in DRS?

With one of the longest acceleration zones of any circuit in the world, let alone street circuits, Baku is the antithesis of Monaco in that there are clear overtaking opportunities around the lap. Unsurprisingly, DRS has often played a large part in creating these chances in previous seasons, with drivers benefiting from a major tow exiting the fast 18-19 sweepers before activating DRS for the final 700 metre run to the finish line.

However, this season, cars are able to follow more closely thanks to the revised technical regulations for 2022. The new ground effect cars will not only allow drivers to stick more closely to rivals ahead through the tights, twisty sections of the course, they also could make passes down the main straight more straight forward than ever before.

The FIA’s head of aerodynamics Jason Somerville recently said he would like to see the sport phase out the controversial overtaking aid in the long-term. Baku could be an important test of whether these new-look cars could create exciting racing in a DRS-free environment. However, whether the FIA race director Niels Wittich will reduce the DRS activation zones compared to 2021 – or even extend them – remains to be seen.

Will the softest tyres hold up under stress?

Last year’s Azerbaijan Grand Prix was certainly a dramatic one, with championship rivals Verstappen and Hamilton both failing to score. But the circumstances that led to this were not ones anyone would like to see repeated this weekend, as Verstappen was the second of two drivers to experience sudden tyre failures along the extremely fast main straight. Lance Stroll suffered a near identical problem earlier in the race.

However, those failures were on the last-generation 13-inch wheels, rather than the new 18-inch wheels for the 2022 season. This year, just as they did in 2021, Pirelli have opted for the softest possible combination of C3, C4 and C5 compounds for this weekend, with Pirelli’s Mario Isola explaining that, as a street circuit, Baku does not place a high level of stress on tyres.

“The demands of this city track are still relatively low, as none of the corners take a huge amount of energy out of the tyres due to the low levels of abrasion and contained lateral loads – which means that we can have the same nomination as Monaco,” Isola explained.

However the strategies play out on Sunday, what must not happen is any repeat of the incidents that ultimately transformed the outcome of the race here last year.

No more excuses for Schumacher

With his 28th consecutive grand prix start without a single world championship point to his name, Mick Schumacher is steadily rising up the rankings for most races in Formula 1 without scoring a point.

After a promising start to the season, Haas have failed to fully capitalise on the opportunities for points they have created with their much improved performance for 2022. But even more of a headache for the team has been the volume of incidents that their youngest driver has had over the first seven weekends. Schumacher missed the Saudi Arabian Grand Prix with an ugly, violent accident in qualifying, almost crashed into the back of Yuki Tsunoda under Safety Car in Melbourne, spun at the second corner in the wet in Imola, clashed with Sebastian Vettel in Miami and then crashed heavily at the Swimming Pool in Monaco, wrecking his VF-22 in the process.

After a series of accidents during his rookie year, it appears that team principal Guenther Steiner is running out of patience with the former Formula 2 champion in his second season in F1. Steiner admitted it was “not very satisfactory” for Schumacher to end his weekend in the barrier for the second time in seven race weekends. Heading into another street circuit in Baku, Schumacher needs to deliver a clean weekend, otherwise the pressure will truly begin to build on the 23-year-old.

Can a fix be found for F1’s budget cap crisis?

F1’s decision not to replace the cancelled Russian Grand Prix with another round has gone some way to easing teams’ travel expenses in the second half of the year. However with inflation soaring several of the leading teams are sounding the alarm about the unforeseen cost rises they are having to bear in the second year of the budget cap.

Not all teams are as concerned. Alpine have argued against any relaxation in the spending limits, arguing they foresaw the increase and budgeted accordingly.

The question now is whether the FIA will act to ease the pressure many teams claim is unsustainable, and if so when.

Are you going to the Azerbaijan Grand Prix?

If you’re heading to Azerbaijan for this weekend’s race, we want to hear from you:

Who do you think will be the team to beat in the Azerbaijan Grand Prix? Have your say below.

45 comments on “Can Perez win two-in-a-row on a track he excels at? Six Azerbaijan GP talking points”