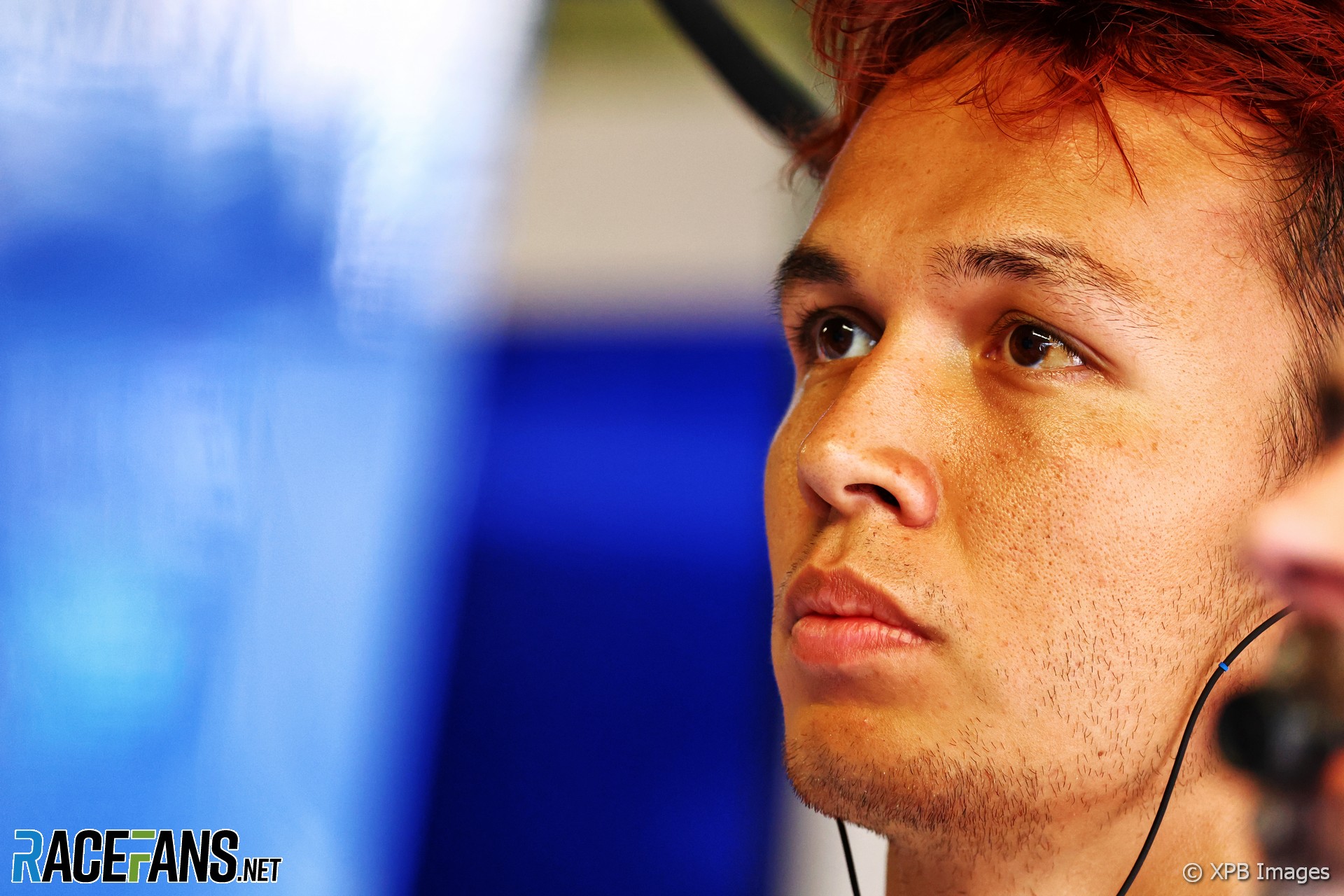 When Williams lost George Russell to Mercedes at the end of the 2021 season, it was easy to wonder about the team’s long-term chances of success having lost its talisman driver, just as F1’s new generation of technical regulations arrived.

But when Red Bull lobbied Williams to put Alexander Albon into their vacant seat for 2022, it seemed like a mutually beneficial arrangement for all parties involved.

Pushed aside by Red Bull in favour of Sergio Perez for 2021 after his difficult 2020 season alongside Max Verstappen, Albon’s behind-the-scenes work developing the RB17B and running simulator session throughout race weekends to support the pair was invaluable. Team principal Christian Horner giving Albon considerable credit for his contributions to Verstappen’s eventual championship-winning campaign.

After the first six races of the season, even Russell was full of praise for his successor, who scored points finishes both in Australia and Miami.

“Alex has done an exceptional job,” said Russell ahead of the Monaco Grand Prix. “There was obviously no secret he had a tough time that Red Bull. But I think all of us, even probably Max included, just knew how talented Alex was.

“We’ve all raced each other since 2011. He’s always been one of the very best, so it’s no surprise to me, and I think happy to see that he’s back in Formula 1, and that he has cemented his position.”

Having worked closely with the Thai-British driver on his return to racing in Formula 1, Williams’ head of vehicle performance, Dave Robson, had even higher praise for the team’s newest driver when speaking to media including RaceFans ahead of last weekend’s Monaco Grand Prix.

“I think, overall, his performance has been outstanding,” said Robson. “Particularly in the races. I’m very impressed with the way he handles himself during the race.

“Qualifying is always difficult because of the pace of the car. But in the race he is so calm and his ability just to get on with it, see the bigger picture and manage the stints accordingly, I think is really impressive.”

With Williams’ FW44 lacking the same level of performance as many other teams on the grid, Albon has had to employ some unconventional strategies to try and create opportunities. Robson says this has only been made possible thanks to Albon’s racecraft.

“He can be pretty robust at defending and attacking when he gets the chance,” Robson explained. “But his robust defence is good and has allowed him to have some of the races that he’s had. So I’ve been impressed.

“I think even better than that is he’s still getting better, or we’re getting more used to understanding what he wants and how to work with him. So I think there’s more to come. If we can just get a bit more pace out the car to give him a better chance at qualifying, then I think we’ll see a step up in performance quite quickly.”

It is easy to overlook the fact Albon is, like team mate Nicholas Latifi, only in the third full Formula 1 campaign of his career. But Robson believes that through Albon’s race experience and the benefit of his time at Red Bull, he is able to provide Williams with the leadership they need during a time of great transition for the team coupled with the major technical regulations changes for 2022.

“I think Alex can provide quite an awful lot of that,” he said. “It would have been great if maybe the big rule change had come 12 months later or something – if we’d had a bit of continuity with him – because it’s difficult, particularly when the car is off the pace.

“He knows what he wants. The bit we’ve got to try and work out with him is how much of what he wants can we actually give him and how much are we just constrained by the rules and the tyres this year and that can be a little bit tricky. But in terms of understanding what he wants and him generally guiding the team from what he feels, then I think he’s got lots of really good experience and invaluable input. And I don’t think he’s at all far away with what he’s asking for.

“Obviously, it’s been a bit of a bedding-in and learning period between us and him to understand and interpret what he wants into sort of an engineering sense that we can actually act on. That just takes a bit of time. But otherwise, I think he’s got an awful lot of valuable input. He’s good at leading the team in that regard.”

After two difficult weekends for the team, the question for Williams is if and how they can continue to develop the FW44 over the year ahead to try and ensure they can keep capitalising on opportunities to score points. Do Williams have anything major in the pipeline for the coming races?

“The big question is with the resource limitation or the cost cap limitation – at what point do you commit what’s in the tunnel to the real car, or do you just hang on and hope there’s one more big step to come in the tunnel that you can capture. So that’s probably the stage that we’re at at the moment. There’s some good direction, some good bits that definitely would make the car faster, but we’re still just weighing up exactly when to commit that to manufacture.

“I think for the next couple of races, we’re back to more lower downforce type circuits that will be completely different. I don’t think there will be any major upgrades for these pair of fly-aways. And then it’s how soon after that do we decide to deliver the package – that’s something we probably could decide this coming week, actually. So there’s stuff on its way.”

Despite comfortably out-qualifying team mate Nicholas Latifi again last weekend in Monaco, Albon later described his own performance during the weekend as “scruffy”. Charles Leclerc was less than impressed by Albon refusing to yield for blue flags after pitting for slick tyres on the drying track. After rejoining the circuit with the Ferrari right behind him on intermediate tyres, Albon failed to allow the leader through almost an entire lap, to the audible frustration of Leclerc.

Albon would eventually lock up and run wide into Sainte Devote, allowing Leclerc through. It was the first of multiple incidents for Albon, who suffered a puncture after hitting the inside barrier at Rascasse before later receiving a five-second time penalty for cutting the chicane and gaining an advantage. He would eventually retire on lap 50.

“With Alex, we opted to play the long game on the full wet tyres and run it until the track was ready for slicks,” Robson explained after the race.

“We timed the transition pretty well and he found some good pace on hards until he went straight on at T1 and then punctured the tyre. His pace on the mediums after the red flag was again strong, but as he was now out of position, he couldn’t make any places. We retired the car when Alex reported some unexpected bouncing on the straights.

“It was a tough race, but we learnt quite a lot about the FW44 this weekend, some of which will be relevant to the next race in Baku.”