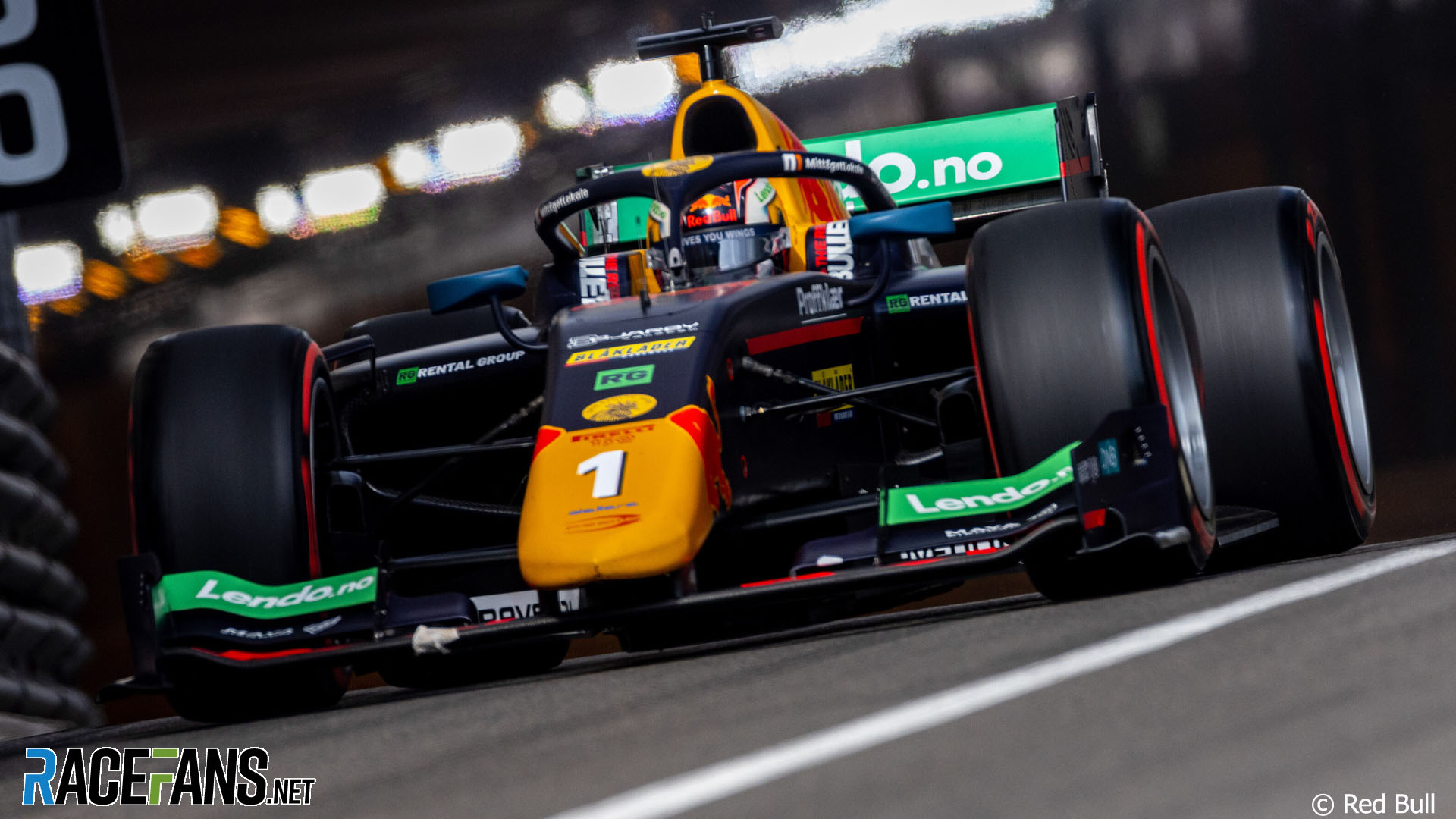 Last year’s Formula 3 champion Dennis Hauger took his first Formula 2 win in the Monaco sprint race, having led every lap of the race.

The Prema driver claimed the win ahead of team mate Jehan Daruvala, with Marcus Armstrong completing the podium in third.

Jake Hughes, who had crashed heavily during qualifying, was on reverse-grid pole due to grid penalties against Liam Lawson and Ayumu Iwasa. Van Amersfoort mechanics had worked late into the night to rebuild Hughes’ car, letting him take up the grid spot with a completely new tub, engine, gear box and suspension. Dennis Hauger joined him on the front row, Jehan Daruvala and Marcus Armstrong behind.

Ralph Boschung had been set to start tenth, however, was forced to withdraw from the sprint race with a recurrence of neck problems he had suffered in Barcelona. As a consequence, the final 11 cars on the grid were promoted up a place, with 21 total starters.

When the lights went out, Hughes’ car failed to get away from his grid spot. Somehow, all drivers managed to avoid his stricken car as Hauger drove away in the lead for an otherwise uneventful first lap, the only major movement being Theo Pourchaire passing Jack Doohan for sixth with a bold move through Mirabeau.

Felipe Drugovich came into the pits on lap two for wet tyres, as he believed that rain had started to fall, after suffering a puncture on the opening lap, Lawson having clipped the back of his car while both were trying to avoid Hughes’ car. However, Drugovich had to pit again on lap five to change back to supersoft slicks, his race now effective over.

Hughes was able to come back out on track but nearly a lap down, effectively circulating the track on his own. To make matters worse for Van Amersfoort, a black-and-orange flag was shown for Amaury Cordeel on lap four, forcing him in for a front wing change where he would join Drugovich and Hughes at the very back of the field.

Drugovich was told on lap six to come back to the pits again, at the same time as being noted for speeding in the pit lane during his prior stop and issued a five-second time penalty. Drugovich’s team explained to him that after pitting for wet tyres, rules state that they have to be used – at which point, the championship leader was retired from the race.

Clement Novalak stopped on track out of La Rascasse, after being pushed into the wall by Iwasa, who had attempted to overtake up the inside of the corner. “What a fucking idiot man, honestly, what a joke,” assessed Novalak. Iwasa was later handed a 10-second time penalty.

A full Safety Car was deployed on lap 10 and Drugovich returned to the track, now on wet-weather tyres, five laps down. Racing resumed on lap 14, Hauger getting away in the lead, Daruvala and Armstrong behind him. Enzo Fittipaldi began to threaten Armstrong but was unable to find a way past the Hitech driver.

Drugovich pitted again and was noted for another pit lane speeding incident, earning a five-second time penalty. Arguing with his pit wall on the radio, Drugovich seemed as confused as anyone else as to why the team had kept him in the race. On lap 19, six laps down, Drugovich was finally told to retire his car.

Fittipaldi, Jüri Vips and Pourchaire entered a three-way fight for position on lap 20, following each other only feet apart but none able to make a move.

Hauger remained unchallenged until the end and duly collected his first F1 win. Daruvala was five and a half seconds back from him in second place, followed by Armstrong.