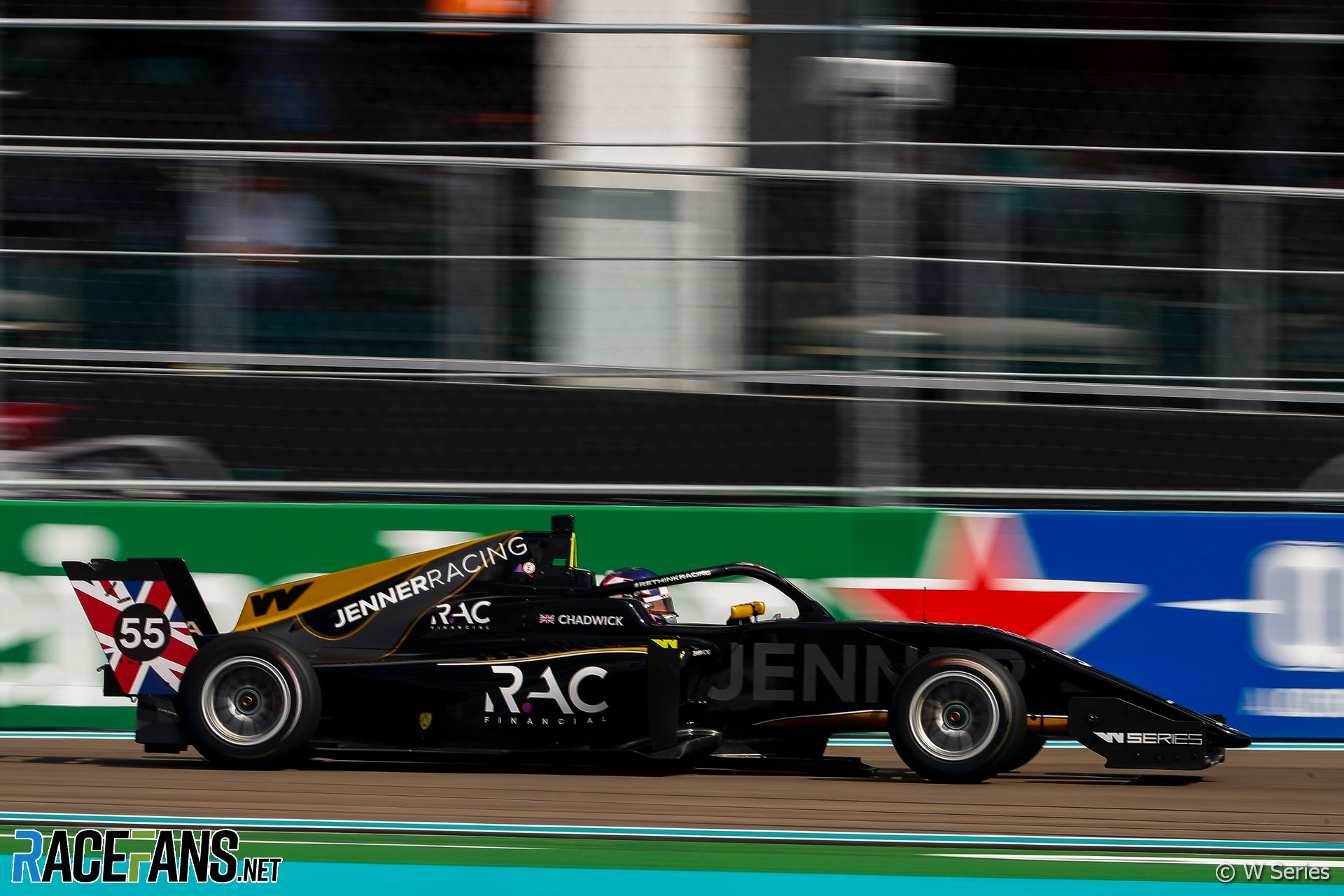 Jamie Chadwick has claimed her second victory of the W Series season, winning from pole in the second Miami round.

Chadwick started from pole in the second race, with race one pole sitter Nerea Marti alongside her with Emma Kimilainen and Alice Powell behind.

Track temperatures were significantly lower than the previous day as the field lined up on the grid. Unlike yesterday’s race, every car made it off the grid without stalling and Chadwick got away cleanly in the lead with Marti and Kimilainen following behind.

Kimilainen made an attempt on Marti’s second place using the same move through the inside of turn 11 that had cost her the lead from Chadwick in race one. However, this time Kimilainen was unable to make the corner cleanly and Marti held on to second.

Rookie driver Juju Noda had a spin at turn 17 on the first lap. She was able to continue but substantially off the back of the pack. A few laps later she was joined by Bruna Tomaselli, who suffered a right front puncture after contact with W Series Academy team mate Bianca Bustamante.

Kimilainen was able to take second place at last on lap five, however Marti fought back into the twisting mid-section of the circuit, passing Kimilainen back through turns 11 and 12.

Rookie and home racer Chloe Chambers was able to take advantage of Jessica Hawkins’ tyres beginning to fade to pass her through turn 11 and take 11th.

The uninterrupted race meant drivers were clinging on for grip entering the final ten minutes. Abbi Pulling had been the fastest driver on track from the midway point of the race and in the final five minutes made a concerted attempt to pass Sarah Moore for sixth. Pulling forced Moore into a lockup into turn 11 and was able to claim the position.

Tereza Babickova was shown the black-and-orange flag for damage to her front wing which was listing badly to the left, forcing her to pit for repairs.

Powell made another attempt on Kimilainen for third on the penultimate lap and went for a move around the outside of turn 17. In a repeat of race one, however, Kimilainen lost the rear of her car on the way into the hairpin, with Powell clipping the back of Kimilainen’s car, breaking the right front wing endplate of Powell’s car. Kimilainen continued and had to hold off Pulling for fifth over the final lap.

Leader Chadwick, however, crossed the chequered flag without interruption, with Garcia again taking second place (and hoping to keep it, this time) and Powell able to celebrate third.

Chadwick leads the championship by a large margin after the first two rounds with 50 points, Beitske Visser in second on 21 points and Abbi Pulling just behind on 20.