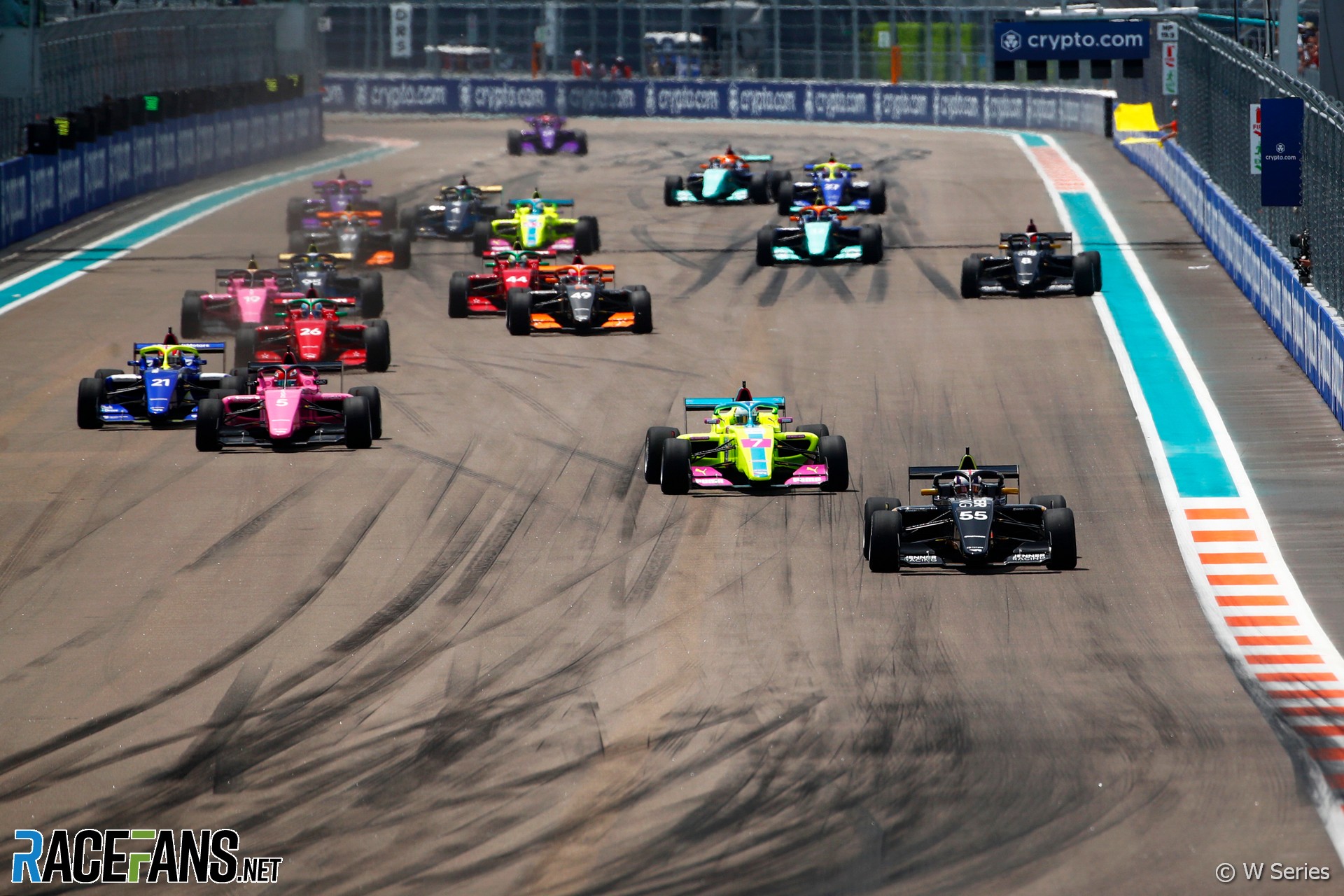 Nerea Marti had started from pole ahead of Chadwick, Alice Powell and Kimilainen. Surrounded by drivers in their third year of W Series, the less experienced Marti got away poorly, falling to 12th. Chadwick took the lead off the line with Kimilainen snatching second

But Alice Powell’s start was even more disastrous than Marti’s. Her race end in the wall at turn eight, damaging the TecPro barrier there, spraying polystyrene across the track.

Powell was able to leave her car unaided but a Safety Car was called while it was recovered, neutralising the race before Chadwick and Kimilainen had crossed the start/finish line. Powell’s car had initially failed to get away from the grid prior to her crash as she closed on the tail of the pack.

Her wrecked car was picked up by a recovery vehicle. This had to travel along the track in order to exit, stopping under a bridge on the short straight from turn nine while cars continued to circulate behind the Safety Car. As the process dragged on and race time dwindled away, a red flag was thrown with 18 and a half minutes 29 remaining.

The race resumed at 14:55 local, with a rolling start. Chadwick got away in the lead, Kimilianen and Fabienne Wohlwend behind her.

Marta Garcia took third from Wohlwend through turns five and six, their battle allowing Chadwick, with Kimilainen on her rear wing, to draw a short lead. Kimilainen made an attempt at a pass through turn 17 but was repelled by Chadwick, although they crossed the line almost side-by-side to start the third racing lap.

Wohlwend suffered a lock-up into turn five which gave Jessica Hawkins the opportunity to make a serious attempt at taking fourth, a line of cars beginning to form behind Wohlwend while the leaders drew away. Abbie Eaton, meanwhile, had moved up to sixth and into a position to threaten Hawkins, before Beitske Visser passed Eaton through turn six at the same time as Hawkins passed Wohlwend, feeding the CortDAO driver back into the pack behind.

With eight minutes to go, Kimilainen managed to pass Chadwick for the lead through turn 11 and make it stick. The Puma driver was able to pull a small lead, Chadwick not as close behind her as they had been before but still within dangerous distance when a second safety car period was called.

Both Eaton and Wohlwend were out of the race after colliding at the entrance of turn six, their cars ending in the run-off after a sequence of corners where both had repeatedly gone off-track and over kerbs in a multi-car battle for fifth place.

The Safety Car was summoned again but this incident was cleared more quickly, allowing for a final lap of racing. Kimilainen lost the lead on the restart, running wide and handing the lead back to Chadwick, while Garcia took second.

Kimilainen harassed Garcia through the tight mid-lap corners and onto the straight, then made a bold move around the outside of turn 17. There was contact, and the former leader was sent spinning finishing the race last.

Chadwick was able to come home cleanly ahead of Garcia behind while Hawkins was promoted to her first W Series podium in third after defending from Visser for the final lap. Kimilainen’s demise also promoted Abbi Pulling into the top five.