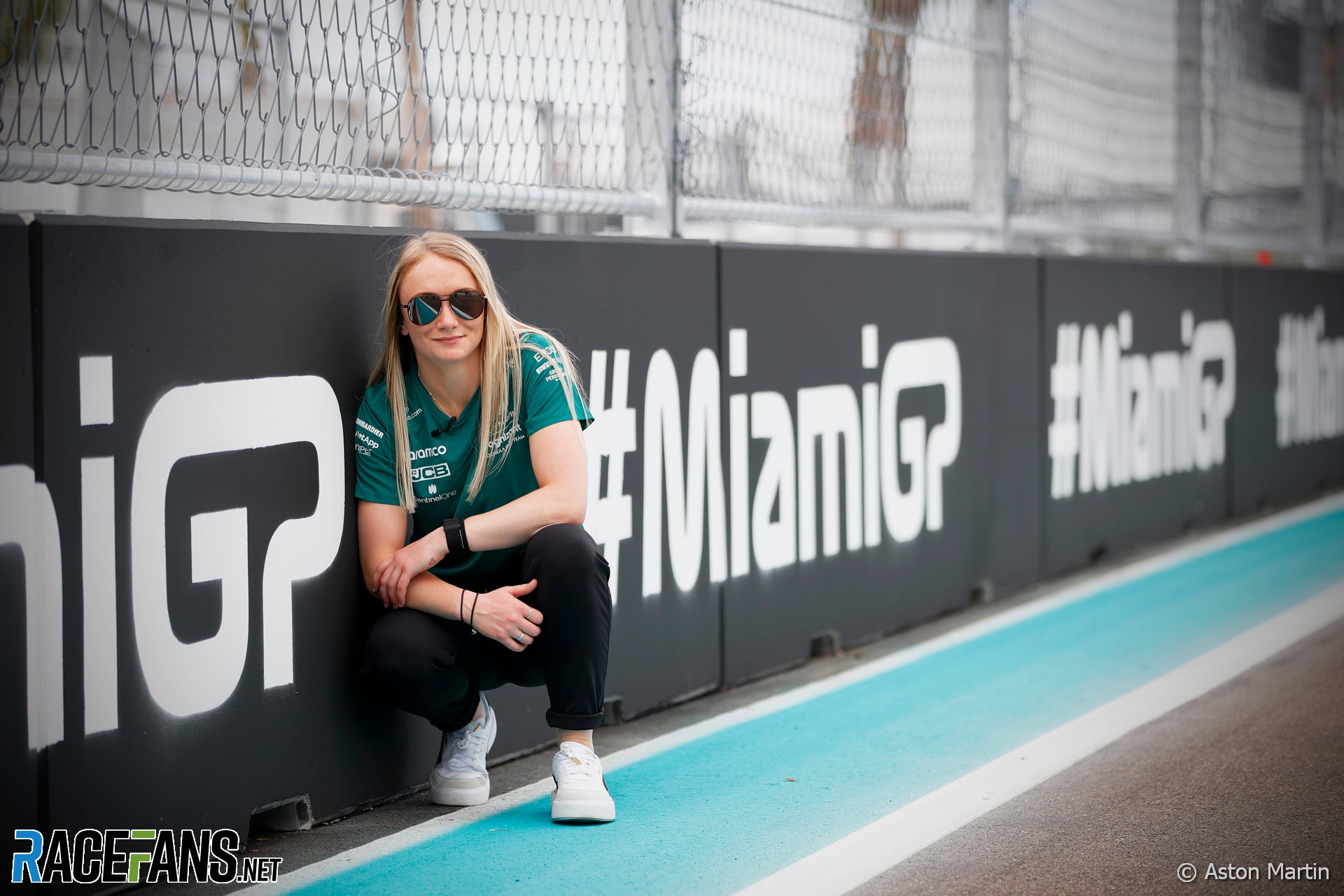 Aston Martin F1 driver ambassador Jessica Hawkins was a stunt driver a few years ago. She still is, sometimes, and worked on the last James Bond film among others.

But the 2008 British Karting Champion has been back to her racing career since qualifying for W Series in 2019 and will be on-track for the season-opening double header in Miami this weekend.

Hawkins has double duties at race tracks, with a role at Aston Martin which includes working directly with Sebastian Vettel and Lance Stroll as well as marketing activities (and unofficially reviewing hire cars with the team’s head of communications).

“I’m doing all the things that I was doing last year as well as hot laps,” she explains. “That’s obviously a big step up, obviously a welcomed new role because that’s one of my favourite things to do.”

She has also had her first taste of the virtual environment in which Aston Martin develop their F1 cars. “I’ve been in the sim recently and will be jumping in again soon. The role keeps increasing, which is great for me. I’m very much enjoying it.”

At only 1.62 metres tall, some adjustments had to be made to the simulator for her to fit. “I’ve only used it very briefly. I can’t give you a full in-depth lowdown on it just yet, but hopefully in the near future that is going to be happening and I will start to use it properly.

“I’ve only really just had a go and got me comfortable in it, kind of a seat fit. You have to be comfortable in the sim and I was quite far away from the pedals when I first jumped in so we’ve adjusted them and they’re going to be usable by the time I get in it next.”

Hawkins says the sense of being accommodated within the team at Aston Martin is helping her own racing in W Series and tin tops – she drives a Cupra in TCR UK and won her second start at Oulton Park last month. “There’s so much to be said for confidence, honestly, when racing,” she explains. “I know I’ve got an incredible team behind me supporting me, willing to do great things and just having that at the back of your mind is very comforting.

“A Formula 1 car is not very comparable to a W Series car, but what I can take away is how to communicate, things they look for and all the things that they go through, how methodical they are with things. So whilst it’s not directly comparable, I can take other things away from it and I know that I’ve got the whole team behind me.”

“If I go out of this room and look through the window that’s not very far away from me, there’s a humongous factory being built, and that’s just one of three that are going to be built.

Her relationship with the two racing drivers also developed over the course of last year. “I just see them as colleagues now and it’s crazy. I’ll often get their feedback, one on one, from how the session went, about how they think it went.

“I get to listen in to debriefs but [asking them] just on a personal level, how do you feel and they’re both very open, nothing is secret as far as I’m aware. I’ve now built a relationship with Nico [Hulkenberg] he’s a great guy, he’s very fun.

“It’s in a good way, I don’t mean that the novelty is gone, but I mean in the way that it’s normal. I feel as much a part of the team as what they are.”

Already in her second year with Aston Martin, Hawkins is committed to them for the long-term. “If you cut me in half, I would be green,” she says.

“I love it here. I really don’t want this to be a one-year thing that ends, I want it to be a long-term thing and I would very much like to make myself a part of the team, so it’s not even in question if I’m saying. I wish I had a crystal ball, but what I will do is learn as much as I can, get involved in as many things as I can.

“And never say never to driving the cars. We’re in year two of a five-year development and things have changed so much even within being here just a year.”

9 comments on ““If you cut me in half, I’d be green” – Jessica Hawkins on life at Aston Martin”