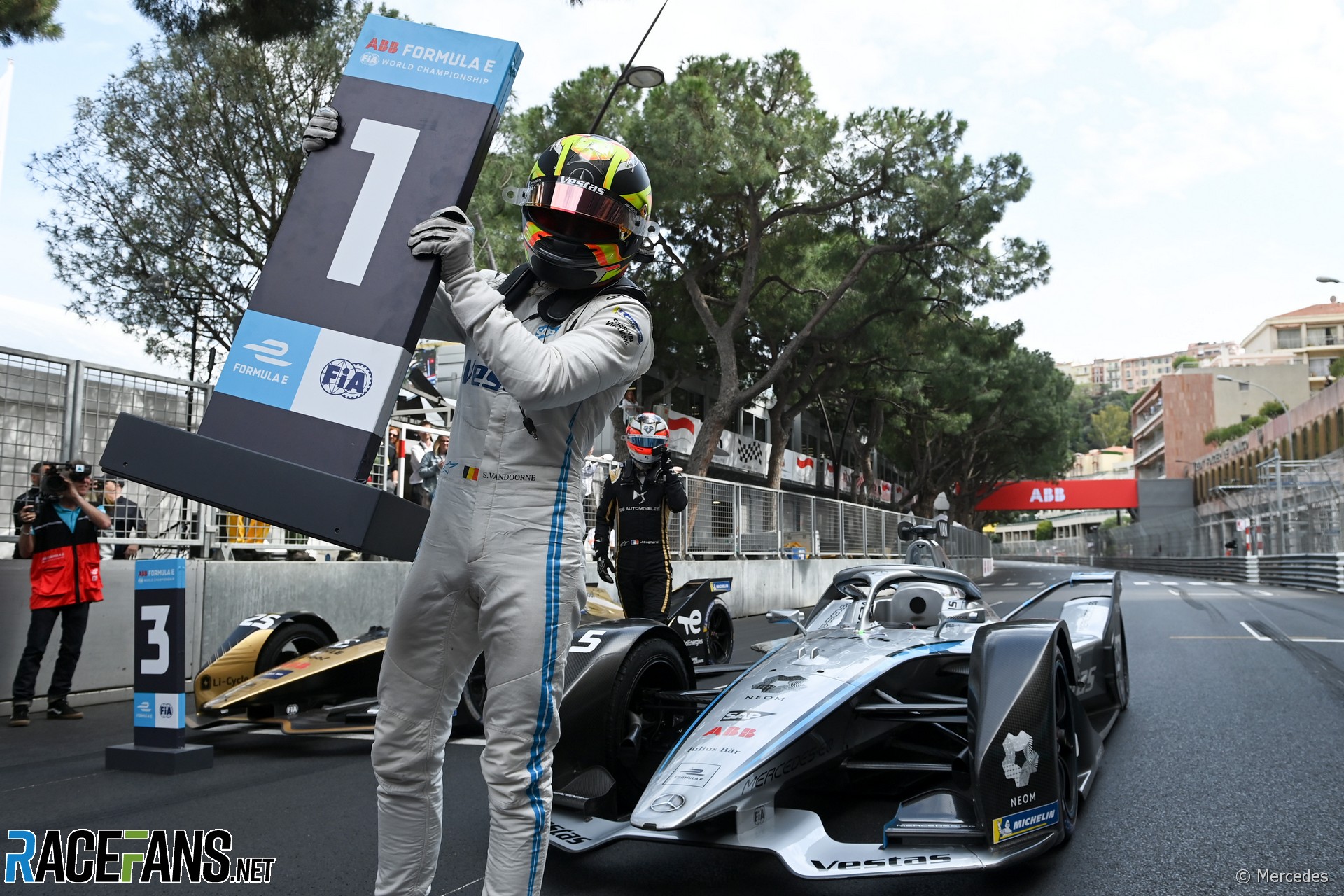 Stoffel Vandoorne won his first EPrix of the season in Monaco to take the Formula E championship lead by holding off Mitch Evans.

Vandoorne rose from fourth on the grid to take the lead of the race, using his strong clean air pace to his advantage after Pascal Wehrlein retired from the front of the field with a mechanical problem.

The Mercedes pulled away out of the reach of Evans who used Attack Mode to try and chase down Vandoorne in the final laps. Jean-Eric Vergne claimed third place for Techeetah.

At the start, polesitter Mitch Evans led away ahead of Pascal Wherlein in second, with Jean-Eric Vergne behind them in third as the field made their way around the Monte Carlo streets for the first time. Sam Bird lost seven places at the start, while Jake Dennis managed to gain three.

The field ran in an relatively orderly fashion over the opening ten minutes, with only Nick Cassidy stepping out of the large queue to be the first driver to take attack mode from near the back of the field.

Antonio Felix da Costa took his first attack mode from 11th place, using it to pass Oliver Rowland and Jake Dennis once they took attack mode the following lap. Further back, Bird retired from the race after reporting wishbone damage on his Jaguar.

Back out front, Evans was still leading, but Wehrlein starting pressuring the leader, trying a half-hearted look to the outside into the harbour chicane. Evans was able to fend him off and retain the lead.

Vergne was the first of the leaders to take attack mode, dropping from third to sixth behind Lucas di Grassi and Robin Frijns. Vergne charged past Frijns into fifth up the hill after Sainte Devote, before passing Di Grassi for fourth at the chicane half a lap later.

Despite both Evans and Wehrlein having the benefit of attack mode, the Porsche passed the Jaguar to move up into second place and immediately began pressuring Vergne for the lead. Coming out of the tunnel, Wehrlein used his extra speed to drive around Vergne into the lead of the race, while Vandoorne demoted Evans down to fourth.

Suddenly, Wehrlein began slowing approaching the Fairmont Hotel Hairpin, pulling to the side of the track as Vergne took the lead of the race. Vergne took his second attack mode on the following lap, allowing Vandoorne into first position. But Wehrlein had come to a stop at the exit of the tunnel, causing a brief Full Course Yellow while the Porsche was recovered.

After the session restarted, Oliver Rowland and Andre Lotterer collided while fighting into Sainte Devote, with both cars clattering into the barriers, putting Lotterer out on the sport and forcing Rowland to pull off the circuit further around the lap. The Safety Car was deployed, but Vandoorne took his second attack mode and managed to retain the lead of the race, his attack mode time draining away as he sat behind the Safety Car.

Evans used his greater power to first drive around Frijns into fourth, before doing the same to Vergne for second a lap later. The Jaguar driver had only a minute of attack mode remaining to try and catch Vandoorne in the lead, but was unable to bridge the gap to the Mercedes out front.

Vandoorne managed to hold his advantage and use up the additional race time to cross the line with less than one percent of energy remaining and take the chequered flag, a handful of seconds ahead of Mitch Evans. The Mercedes driver also secured the championship lead with his victory.

Jean-Eric Vergne took the final place on the famous Monaco podium in third, ahead of Robin Frijns in fourth. Da Costa took fifth for Techeetah, with Di Grassi in sixth for local team Venturi. Nick Cassidy took seventh for Envision, with Sebastian Buemi moving up from the rear of the grid to finish in eighth.

Jake Dennis and Nyck de Vries rounded out the points positions in ninth and tenth, respectively.