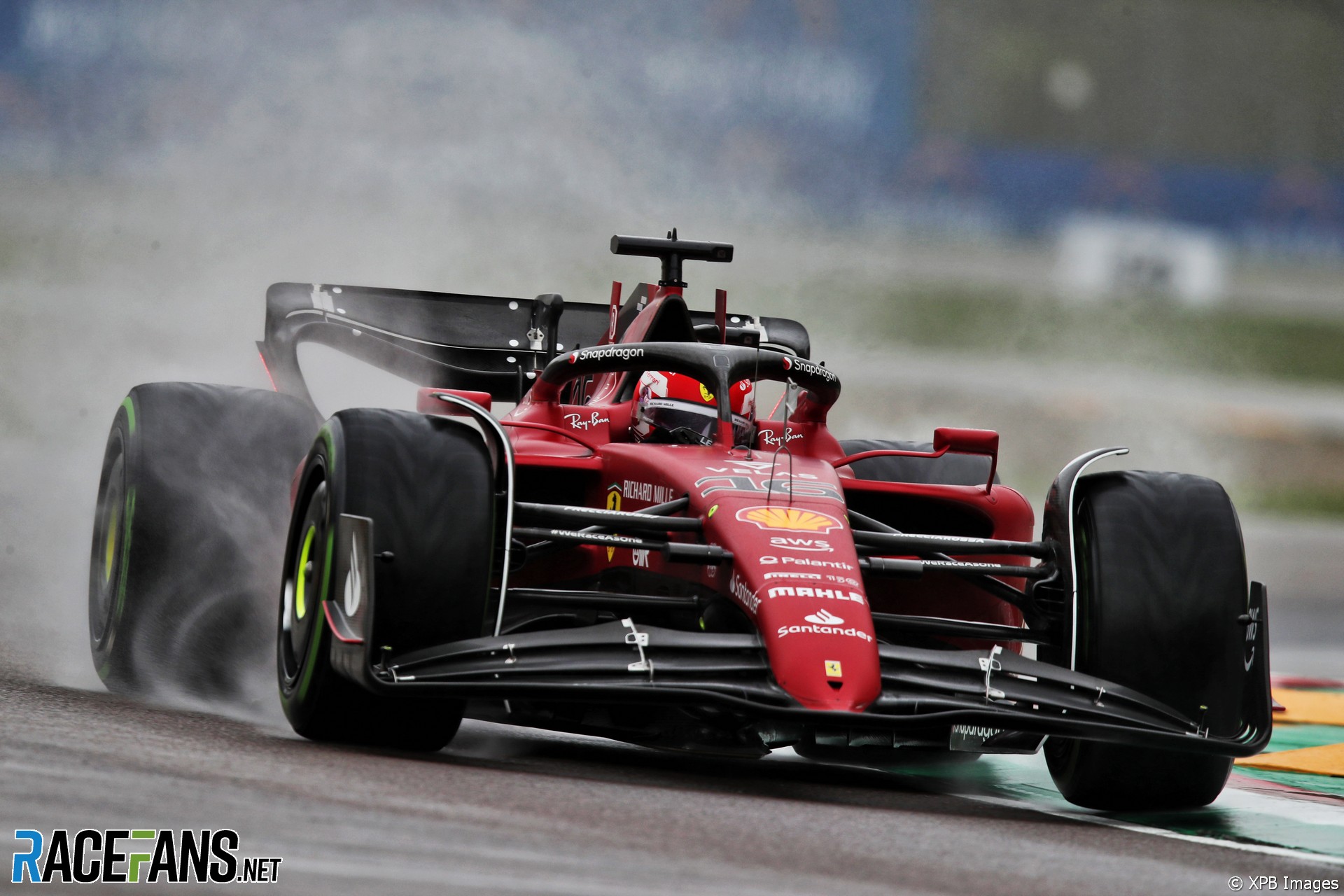 Charles Leclerc led a Ferrari one-two at the top of the times in a wet first practice session in Imola ahead of Friday evening’s qualifying session.

The leading Ferrari was almost a second and a half faster than Max Verstappen’s Red Bull, with the two Haas cars of Kevin Magnussen and Mick Schumacher three seconds off Leclerc’s pace in fourth and fifth.

After Formula 3’s first practice session was repeatedly disrupted by red flag stoppages in the rain and the Formula 2 practice session never started due to the wet conditions, the track was still soaked by the time Formula 1 cars ventured out onto the Imola circuit for the first time. But with no rain falling by the team the green light appeared at the end of the pit lane, teams did not hesitate to take to the treacherous track on full wet tyres.

As expected, the slippery surface offered minimal grip. Nicholas Latifi ran off the track at the Tosa corner, but managed to re-join the track with minimal damage. Leclerc spun twice in the first 20 minutes of the session, first after clattering the kerbs at the Variante Alta chicane and later while exiting Acque Minerali.

Just before half way through the session, Vettel became the first driver to take to the track on intermediates, setting a lap time that was just over six tenths slower than Sergio Perez’s overall best time set on full wets.

As the session continued, it became clear the track offered more lap time for those on intermediate tyres. Despite having a third spin of the session exiting the Tamburello chicane, Leclerc went fastest of all and continued to go quicker lap after lap, as team mate Carlos Sainz Jnr improved to sit second in the times.

With five minutes to go in the session, Norris spun his McLaren into the gravel at Acque Minerali, bringing out the red flags. However, Norris was able to reverse out of the gravel trap and recover back to the pits, allowing the session to resume with over three minutes remaining, with most of the field taking advantage to get in some final few laps.

None of the drivers at the top of the times improved their times before the chequered flag, leaving Leclerc fastest of all when the chequered flag flew at the end of the session. Sainz was second quickest, with Max Verstappen was almost a second-and-a-half adrift of the Ferrari in third.

In fourth and fifth, a further 1.5s slower than Verstappen, were the two Haas cars of Kevin Magnussen and Mick Schumacher, with Perez sixth in the second Red Bull.

As the session concluded, Valtteri Bottas spun his Alfa Romeo at Acque Minerale, skidding into the gravel trap and making the slightest of contact with the outer tyre barrier. While Bottas attempted to reverse out of the gravel much as Norris had successfully managed earlier, he was not able to do so and was forced to abandon the car.