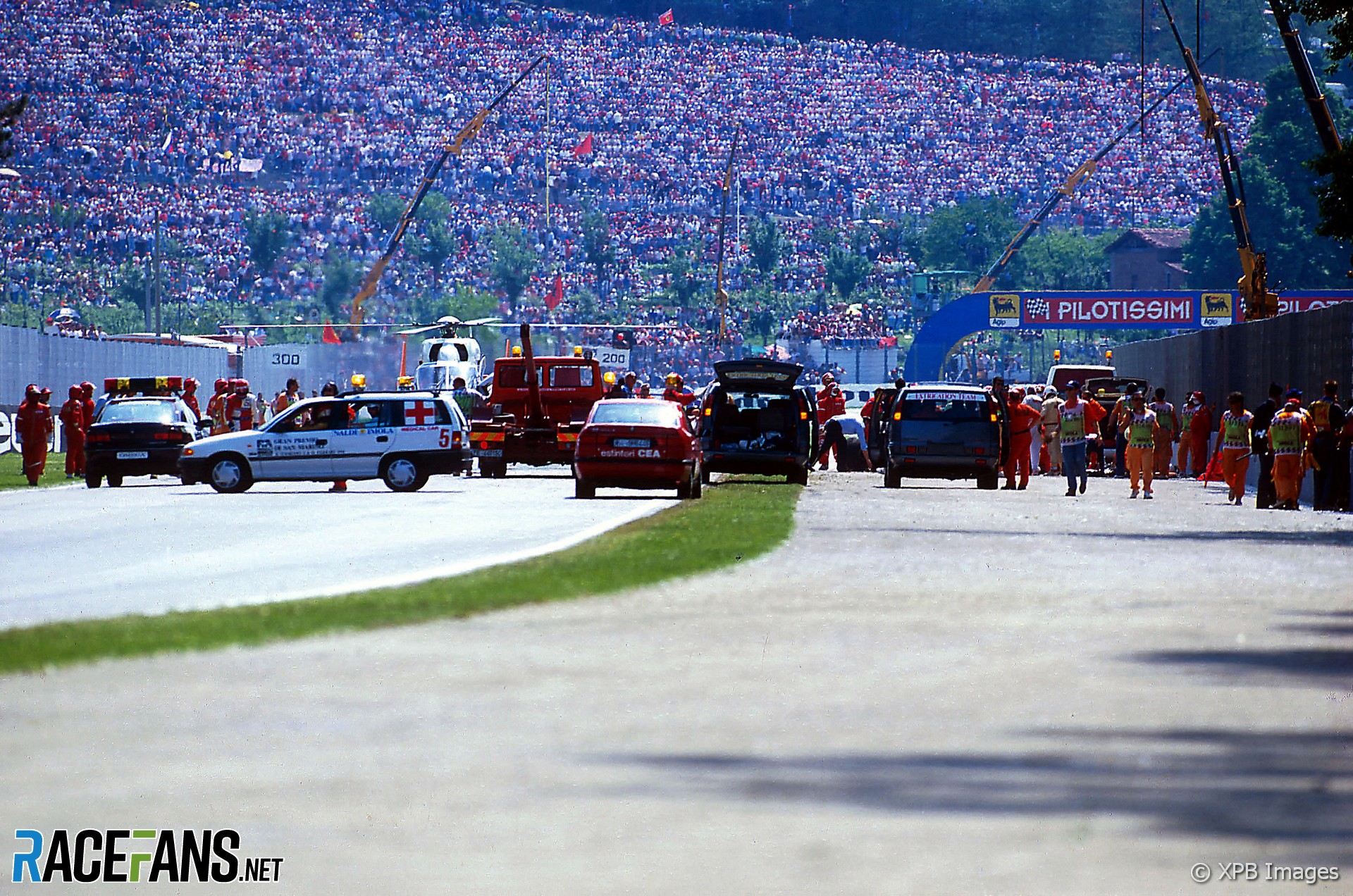 “Honestly, even now, the thought still gives me goosebumps.”

Everyone remembers the first time they hear and see a Formula 1 car in person for the very first time. But not many people’s first exposure to the sport is the screaming symphony of a Ferrari V12 engine, echoing around the hills and valleys of its native Italian countryside.

Back in April of 1994, Claire Campbell was travelling in Italy with her boyfriend, exploring a country she had wanted to visit since her childhood. The pair planned their journey around one central element – attending the third round of the 1994 Formula 1 world championship, the San Marino Grand Prix.

“We’d specifically gone for the grand prix,” Claire recalls. “I’m a bit of an Italophile and being in Imola, I’d read all about the Tifosi on the hill at the Rivazza, watching the race. So being in the hometown of Ferrari, if you like, made it even better.”

While her boyfriend was by far the bigger Formula 1 fan of the two at the time, Claire had grown up with a deep appreciation for the gladiatorial spectacle of the sport.

“I was born in the sixties, so I grew up watching Formula 1: James Hunt and people like that, who were just legendary. Then Nigel Mansell and Damon Hill at the time.

“I’d watched it as a kid and always had a kind of fascination because, these motorsport drivers, they were just otherworldly, weren’t they? And I still think that’s the case now.”

Claire and her partner arrived in Imola on the Thursday, the day before the track action was due to begin. Unsurprisingly, the high demand for hotel rooms in and around the town for that weekend had forced the pair to be creative with their accommodation plans.

“When we arrived on the Thursday, we learned from some of the other guests that one of the F1 drivers was staying there for the weekend. A driver by the name of ‘Ratzenberger’ was sharing the hotel with us that night. I always remembered that name.”

On Friday the pair ventured down to the five kilometre circuit just before 10am – by which time the opening practice session of the weekend was already well underway. The shriek of the Ferrari V12s was immediately recognisable among a field largely populated by V10s and V8s.

“I remember there was this long kind of avenue,” Claire says. “As we walked up the avenue, you could actually hear the Ferraris – they were unmistakable. Honestly, even now, the thought still gives me goosebumps.”

“By the time we’d reached the end of this avenue, I was almost running down because all I could think was ‘I’ve got to see these cars’.

“It was amazing. I remember watching them practice and thinking, ‘I cannot get my head around how fast they’re going around these bends’. It was staggering, it really was.”

Long before we all had mobile internet connections in our pockets, the pair only had the circuit’s public address system to keep them informed, and were unaware of the day’s most serious development. Jordan driver Rubens Barrichello had suffered frightening injuries in a horrific crash at the Variante Bassa chicane.

After travelling to their hotel in Bologna, where they would remain until Monday, the pair returned to the circuit on Saturday for qualifying. It was then that Claire was confronted with the inherent danger of the spectacle they had come to witness that weekend.

Today the Tamburello and Villeneuve corners are chicanes; 28 years ago they were flat-out kinks. Standing on the inside of the left-hand Villeneuve, the pair saw cars approach at close to top speed.

“Watching them then, it looked like it was just crazy,” she says. “Crazy dangerous. Beyond crazy.”

Then, with no warning, Ratzenberger – who they’d slept under the same roof as one night previously – speared off the circuit on the outside of Villeneuve and into a concrete barrier. Having struck the wall at 314.9kph (195mph), his shattered car didn’t come to a rest until the next corner, Tosa.

An hour later, at Maggiore Hospital in Bologna, the 33-year old was pronounced dead. Formula 1’s first fatal accident in almost eight years and the first at a grand prix for almost 12. “It was horrific,” Claire remembers.

“It’s just ridiculous that it got to that point. But I’m not an expert, so I don’t know what was in place and what the attitude was at the time in terms of safety.”

Arriving back in Bologna that evening, the couple decided to distract themselves from the sad events of the day by heading out to a local bar.

“While we out, we met these two Austrian guys who were also attending the race and got talking. Naturally that day, we had a lot to talk about.

“We had tickets for Rivazza where the Tifosi were, on the hill. These two Austrian lads said they had grandstand seats for the start-finish straight and asked if we wanted to have those because they weren’t interested in the start and we could swap over midway through the race, meaning we could watch the start of the race.

“So obviously we jumped at that. We arranged that we’d meet in the public area at a certain time, swap tickets again and we’d go back to the Tifosi while they’d go back to the grandstand for the finish.”

Now in possession of tickets for the pit straight, the pair walked to the grandstand and prepared to witness the start of their first ever grand prix overlooking the pit straight on the exit of the final chicane.

But as the start lights illuminated and faded and a cacophony of 24 engines roared off the line, JJ Lehto’s Benetton failed to get away from fifth on grid. Pedro Lamy, who started 17 places further back, moved from the right of the track to the left to take the space he saw was available, unaware stationary Benetton was in his path.

Lamy’s car struck Lehto’s with huge force. “A pair of what I think must’ve been wheels shot up over the track,” says Claire. “We were literally across from where that happened.

“There were bits of debris flying over the track towards the spectators and landing in the crowd. I remember thinking ‘this is just unreal,’ because having witnessed what had happened on Saturday leading up to this race, it was hard to think what else could go wrong.” Elsewhere in the crowd nine spectators had been hurt, one seriously.

After a handful of laps of Safety Car, the race eventually resumed, with leader Ayrton Senna leaping away from the pack with second placed Michael Schumacher in close pursuit. Then, after the leaders passed Claire for a second time under green flag conditions, she noticed the marshals begin to wave the yellow flags once more.

The pair saw Schumacher eventually return to the pits, while Senna’s Williams did not, and realised something had happened to the three-time world champion.

“We saw a helicopter arrive and then eventually take off,” Claire says. “We didn’t know what to do, so we went and found these two chaps, swapped tickets and they went and watched the restart, and then we went to where the Tifosi were on the hill. Again, all we knew was that the race had stopped.”

Eventually, the race restarted and the San Marino Grand Prix ran its full course, with another dangerous accident in the pit lane leaving a Ferrari mechanic needing medical treatment after being hit by an errant wheel. The result of the race mattered little, as after three consecutive days of serious crashes, no one was in the mood for celebrating.

“After the race it was really eerie,” Claire says. “Once it was over, we left. As we walked away, I remember it being just really quiet. People were talking, people were trying to get information, and we got a sense that something terrible had happened to Senna, but we weren’t entirely sure. So we left the track feeling really worried, because he’d obviously been either injured or possibly worse.

“When we got to the hotel in Bologna very late and we checked in, we mentioned to the guy on reception that we’d been at the grand prix. ‘What a terrible day,’ we said. And he just paused for a second – and I’ll never forget this – he crossed himself and simply said ‘è morto’.

“‘He’s dead?’ we shouted – we had no idea. We ran straight upstairs and put Eurosport on and obviously watched all the stuff on TV. It’s amazing, really, that in those pre-internet days you had no idea what had happened. We were just in a state of shock. We sat upstairs watching the TV saying ‘I can’t believe at we were there, that he’d died and we didn’t even know.”

With the sudden death of an international sporting icon, it was little surprise to see Senna’s accident dominate the front pages on display around the Bologna newsagent forecourts. What Claire did not expect was to be confronted with such graphic images of the Williams driver’s accident.

“Back then the Italian press weren’t averse to being able to print really horrific pictures. There was just picture after picture of Senna’s bloodied helmet just sitting there. Every front cover of every newspaper. It was vile.”

Despite admitting that her first grand prix experience was “a really awful thing to be a part of,” it did not end Claire’s interest in motorsport. Over the years that followed the couple checked off the Spanish Grand Prix in Barcelona and the Monaco Grand Prix.

Tremendous advances in the safety standards applied to circuits, cars, equipment and more have significantly reduced the number of serious crashes during grand prix weekends. However the fatal accidents suffered by Jules Bianchi and Formula 2 driver Anthoine Hubert within the last decade underline the inherent dangers in the sport.

Nonetheless Claire says anyone who has thought about attending a grand prix should jump at the opportunity. “Oh my god, definitely. It’s a real spectacle.”

“It’s still got that cachet – there’s nothing quite like it. I would say there’s something about a racing car, seeing all that. It’s just the wealth, the pressure, the sense of adventure – everything.”

While her race watching days are long behind her, Claire says she will never forget her experience of witnessing Formula 1’s darkest weekends play out around her.

“I think, generally speaking, it was fantastic to go, even though it was a horrible tragedy,” she says. “I’m glad I was there.”