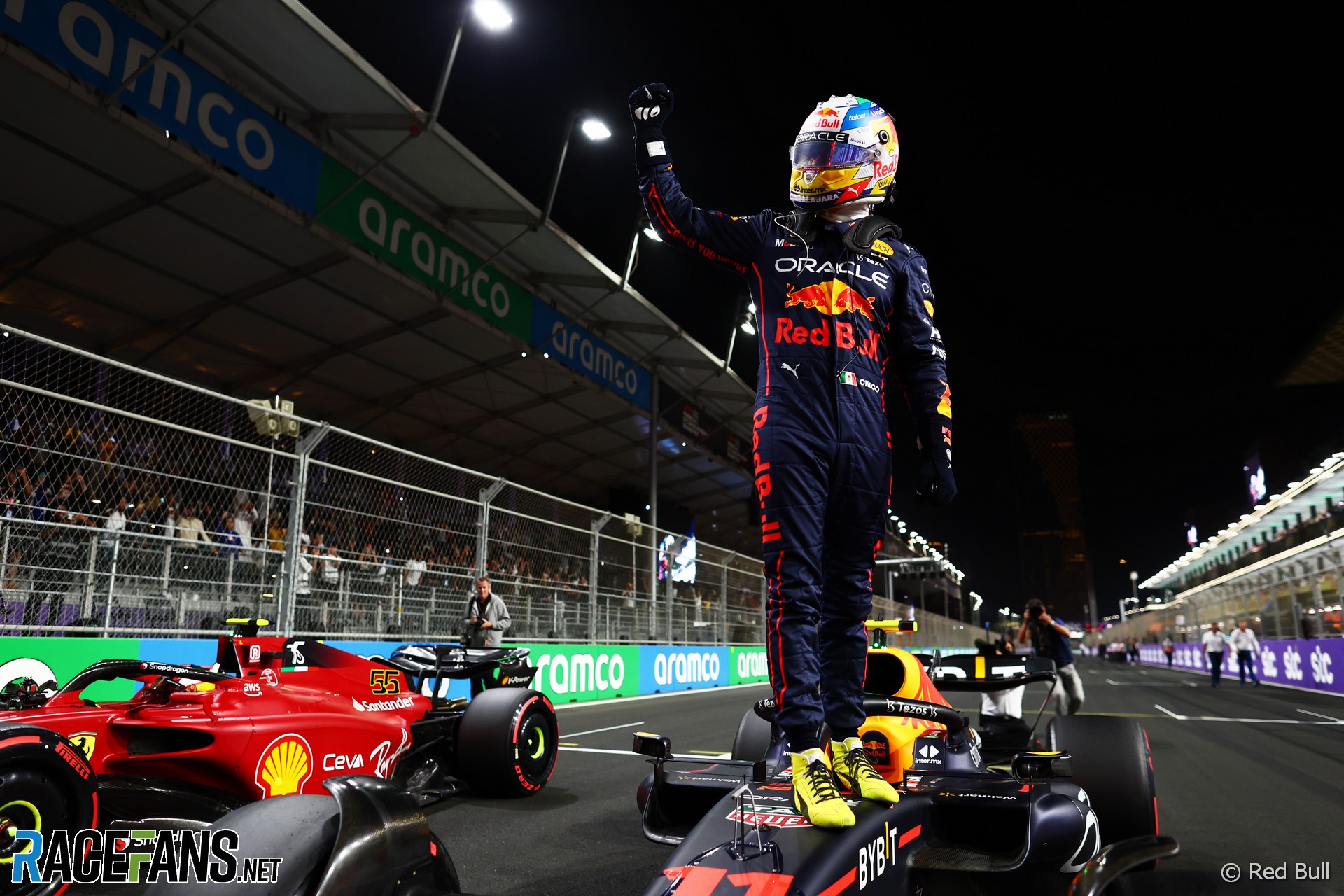 Over the opening race weekend of the season in Bahrain, two drivers established themselves as the prime protagonists set to duel each other for the top spot through this very early phase of Formula 1’s new era.

Max Verstappen and Charles Leclerc wasted no time in resuming the enthralling battle they had engaged in throughout the Bahrain Grand Prix upon their arrival in Jeddah. Across three practice sessions, Leclerc had planted his Ferrari to the top of the timing screens, while Verstappen’s Red Bull was only centimetres behind each time.

So coming into Saturday in Saudi Arabia, the main sporting question on everyone’s lips was which of the two – Leclerc or Verstappen – would claim the second pole position of the season? The answer, as it turned out, was Sergio Perez.

Red Bull’s newest driver had always promised that the rules reset of the 2022 season would be where his tenure at the team would truly begin in earnest. Starting from zero with a car as new to Verstappen as it was to him, this would allow him to fight alongside his world champion team mate on an equal footing. And when Verstappen struggled to extract grip he expected from his tyres, Perez delivered for Red Bull and denied Ferrari and Leclerc their second pole in seven days.

With both Red Bull drivers having left Bahrain with zero points to their name, Perez knows that these could be the best pre-race odds of a race win he’s ever had heading into a Sunday. And he is confident that the RB18 could be even stronger under race conditions.

“We’ve been focusing more on race pace than qualifying,” Perez explained as he sat flanked by the Ferrari drivers in the press conference on Saturday night. “We felt that we’ve given away some qualifying performance to gain it in the race, but obviously we’re going to see. I expect these two are going to be very strong, but I really hope that we can have a strong race.”

Red Bull also enjoy a slight advantage over Ferrari entering race day as Leclerc and Sainz both missed out on high fuel race simulation runs on Friday evening after damaging their cars in separate brushes with the walls. However, both seem confident they will not be at a disadvantage come the race.

“We changed a little bit our programme this morning in third practice and we managed to do some few laps in high fuel which I think went well,” Leclerc explained. So I don’t think it will impact us that much.”

With the gaps between the Ferraris and Red Bulls regularly measured in hundredths of a second over the first five track days of the season, Sainz says he is looking forward to an “exciting” race.

“I think it’s a great battle to have two cars in one tenth and a half, two tenths like we saw today,” said Sainz. “I think it’s great for Formula 1 to have all four drivers just battling it out there. And I think we all have good respect for each other.”

With the two teams as evenly matched as they appear to be at this early stage of the season, the already vital element of tyre management becomes even more critical to get right. Despite bringing the C4 compound tyre to the Jeddah circuit for the first time this season, Pirelli’s Mario Isola says that feedback and data from the teams over the weekend so far suggests that few will want to put on the soft tyres in the race if they can avoid it.

“The majority of drivers have kept two sets of medium and one set of hard, which probably indicates that they will prefer to stick to these two compounds,” said Isola.

“As a result, the strategy is open between a one-stopper and a two-stopper, depending on the actual levels of degradation experienced during the race, which of course depends on a number of different factors.”

Now that drivers who reach Q3 are no longer compelled by the rules to start on old tyres from Q2, there’s a slim but not impossible chance that not a single top ten starter will begin the race on soft tyres. If a one-stop looks viable, then the most likely route there would be to start on the mediums before switching to the hards during a single trip through the pit lane.

Running a long first stint on the hards before switching to the mediums for the final part of the race is much riskier, as it means you’ll likely be swallowed up by those around you at the start, but it might be worth considering as an option for those further down the order. A two-stop strategy provides an alternative approach, but with the soft tyre out of favour, it will likely be limited to only those who have at least two sets of new mediums at their disposal.

However, trying to apply conventional strategy to a circuit as hazardous as Jeddah has proven to be over its first two race weekends might be a foolish endeavour. December’s inaugural race featured not one but two separate red flag stoppages that threw all pre-race plans into the nearby Red Sea.

With multiple Safety Car deployments in yesterday’s Formula 2 race due to crashes and F1 qualifying halted twice for accidents, including a violent shunt for Mick Schumacher that took him out of the race, it’s little surprise that pole-winner Perez described the track as the “most dangerous” on the calendar.

On a practical level, it means this evening’s race has potentially the highest risk of being interrupted by a red flag or even multiple stoppages of this year’s races. Beyond the danger of the start, Schumacher’s crash in the early laps here in 2021 show that even a small mistake can lead to a race-halting collision with the barriers.

For the likes of Lewis Hamilton, starting from a lowly 15th on the grid, or many of his fellow Mercedes-powered rivals around him who may not expect to find themselves in the points on pure performance come the chequered flag, there’s an incentive to extend stints as long as possible for track position in the event they can gain a free pit stop in the event of a Safety Car or red flag.

With drivers still getting to grips with their very different cars for 2022 and potentially running closer together than last year, there’s every reason to expect that the 50 laps of the race distance will not all run under green flag conditions.

Finally, there’s the question of reliability. Red Bull are confident they have solved the race-ending fuel pressure problem that retired Verstappen and Perez late last Sunday, but it was telling how the team had not experienced the issue in testing. As 300 non-stop kilometres are a much stronger test of machinery than cars are placed under in testing, there’s a chance that another team could learn something very important about the reliability of their 2022 car at the worst possible time.

Whatever the final results ultimately transpire to be from today’s race, it’s likely to be one of the most stressful nights of the year for both drivers and their teams alike.

Will Perez hold off the Ferrari threat? What will Verstappen do from fourth? And what can Hamilton salvage from his poor grid position?

Share your views on the Saudi Arabian Grand Prix in the comments.

RaceFans is run thanks in part to the generous support of its readers. By contributing £1 per month or £12 per year (or the same in whichever currency you use) you can help cover the costs of creating, hosting and developing RaceFans today nd in the future.