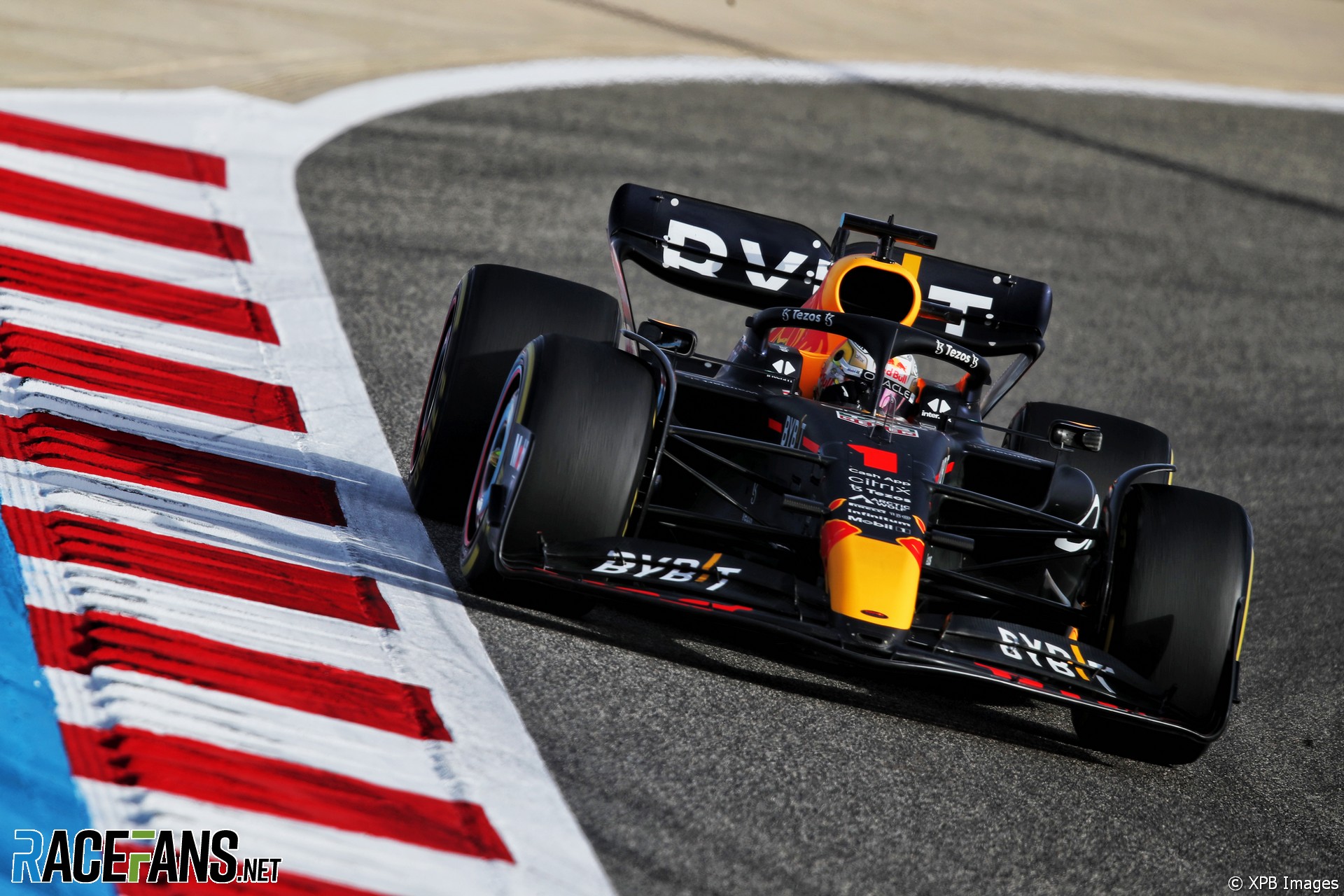 World champion Max Verstappen set the quickest time at the end of Friday practice for the opening race of the 2022 season in Bahrain.

Verstappen pipped Ferrari’s Charles Leclerc by less than a tenth of a second after all drivers set their quickest times of the session on the soft tyres. Carlos Sainz Jnr was third fastest in the second Ferrari, with George Russell fourth for Mercedes.

The second practice session of the weekend was also the only one that will take place under the lights, emulating the conditions that Sunday’s race will take place in. All ten teams therefore focused their early runs on the medium tyres, with Leclerc setting the early pace in the Ferrari, exactly half a second quicker than Verstappen, who was in turn two tenths faster than Sainz in the second Ferrari.

Porpoising was continuing to prove a problem for some of the cars down the long straights. Esteban Ocon complained of being “on the limit of bouncing” in the Alpine, while Lewis Hamilton had similar complaints about the W13.

Eventually, drivers began to venture out on the soft tyres. Ocon went second quickest in the Alpine, before he was replaced in the position by Kevin Magnussen in the Haas. Fernando Alonso just the quickest compound to go fastest overall, but was then comfortably usurped by Leclerc who set a new quickest time of the day with a 1’32.263.

Verstappen’s first effort on the soft tyres saw him light the timing screen purple, becoming the first driver of the weekend to break the 1’32 barrier with a 1’31.936. Mercedes then took to the track, with George Russell going third fastest overall, just under six tenths off Verstappen’s ultimate pace, while Hamilton’s first effort on the softs could only manage ninth, behind Mick Schumacher.

No drivers in the top ten improved their times over the final part of the session, meaning Verstappen finished practice quickest of all, just 0.087s faster than the Ferraris. Russell was fourth in the Mercedes, ahead of team mate Hamilton in ninth.

Fernando Alonso was fifth for Alpine, with Valtteri Bottas making up for lost time in the morning by setting the sixth fastest time in the Alfa Romeo, with 30 laps under his belt. Sergio Perez was seventh quickest in the second Red Bull, ahead of Schumacher, Hamilton and Kevin Magnussen in the second haas.

After returning to the McLaren for his first day behind the wheel since the first pre-season test in Barcelona, Daniel Ricciardo had a frustrating second session after a water leak on his MCL36 ended his session early after only 12 laps.

The stewards are investigating an incident at turn eight, where Charles Leclerc caught Yuki Tsunoda and came very close to running into each other on the exit of the corner. Tsunoda also appeared to clip Lance Stroll’s Aston Martin with his front wing in the closing moments of the session, again at turn eight.

Drivers more then ten seconds off the pace omitted.