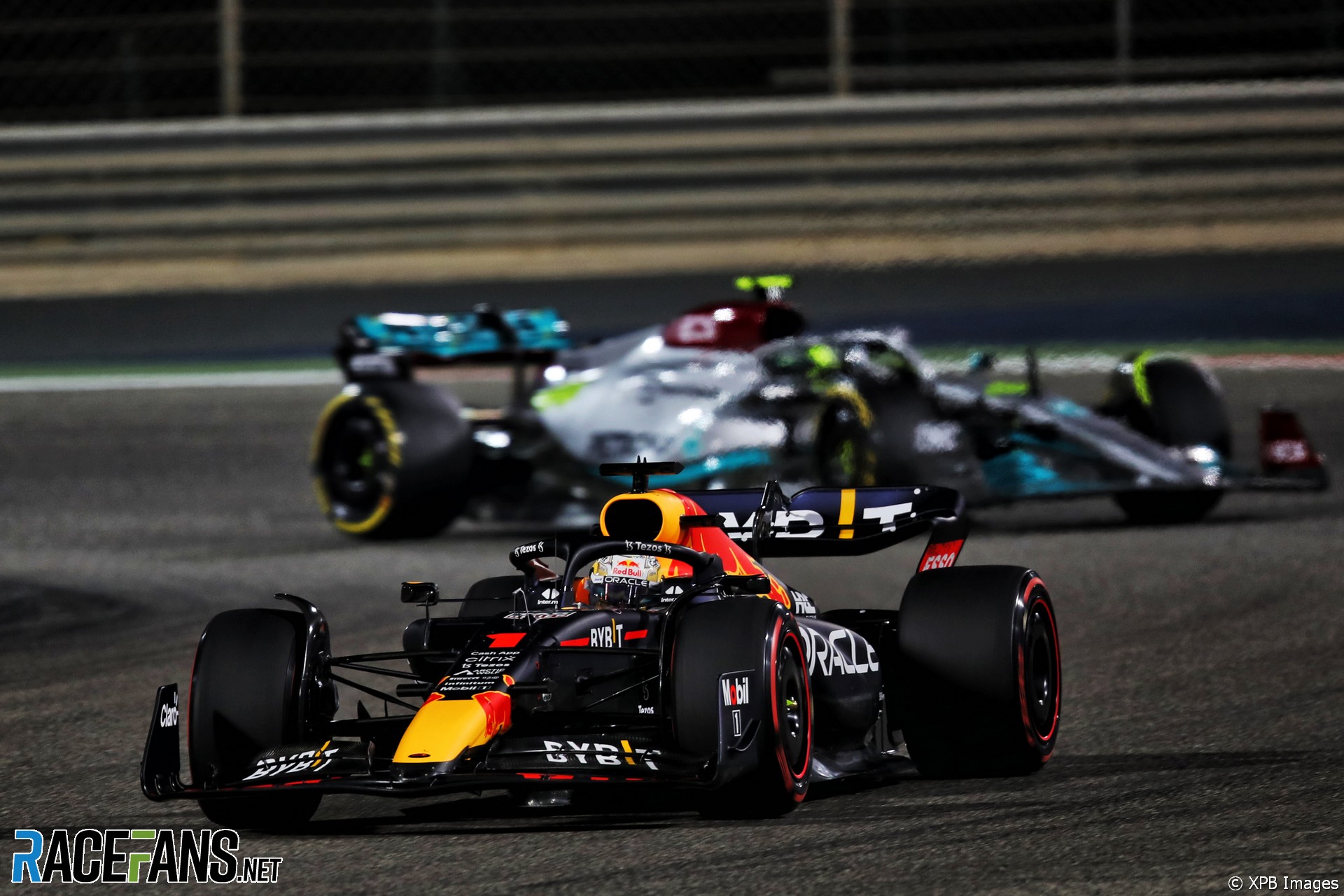 When Mercedes drivers Lewis Hamilton and George Russell offered a pessimistic prediction of their performance ahead of the first day of practice for the Bahrain Grand Prix, Max Verstappen refused to buy what his rivals were selling.

However, after the chequered flag had flown at the end of the first Friday of this longest-ever season, even the world champion would likely accept in private that the team that has dominated Formula 1 for the best part of a decade are now less of a threat to his title defence than Ferrari. At least for this first round of the season.

Fresh from the cockpit of the W13 after his first day’s work as an official Mercedes race driver, Hamilton judged the deficit his new team lacked compared to their rivals as almost a second slower than Red Bull and over half a second behind the seemingly resurgent Scuderia. And the times from Friday’s evening running appears to back up Russell’s assessment.

Being one of the four grands prix to be held under lights this season, the Bahrain Grand Prix has a quirk where only the second practice is held under representative conditions of the race itself. It was no surprise to see almost every team bar McLaren take to the track early in the evening on medium tyres to see how the rubber fared around the far cooler track than the afternoon.

It did not take long for the field to switch to soft tyres for qualifying simulation runs, and that is where Red Bull’s raw performance was demonstrated for the first time. Verstappen’s 1’31.936 at his first attempt out of the garage was 0.087s quicker than Charles Leclerc, who was the closest to the world champion in the Ferrari.

However, as Leclerc explained, there was reason to believe that there was more one lap pace to be drawn out from the shapely F1-75 ahead of tomorrow. “We did the fast lap on the second lap so I think there’s a bit of margin still,” Leclerc explained. “So it’s not looking too bad.

“Today went well, we tested a lot of things, we’ve changed quite a bit the car compared to where we started this morning and all the changes that we’ve done made us progress. So we need to do the same step for tomorrow and hopefully we’ll have a car to fight.”

Russell’s 1’32.5 may have appeared to almost match Carlos Sainz Jnr for lap time, but the Ferrari driver admitted that he had not nailed the set-up for his qualifying simulation and had put in a scruffy lap on his way to the third fastest time of the day.

But it was the race simulations where the Red Bull, especially in the hands of Verstappen, looked the most impressive. Over a nine-lap stint on the soft tyres in the final 30 minutes of the session, Verstappen ticked off an impressive run where he never fell out of the 1’37s. Comparatively, Russell’s own long-run saw him average around a second off the pace of the Red Bull driver on the same compound, while Hamilton was a touch slower than his team mate on the mediums over his 10-lap run.

Mercedes trackside engineering director, Andrew Shovlin, was frank in his analysis of the team’s potential pace and how likely they might be able to claw back the gap by Sunday.

“In terms of pace, we have a significant gap to Ferrari and Red Bull, especially Max on the long run,” said Shovlin.

“There are some relatively easy gains we might be able to make overnight with the balance but we’re not going to find more than a few tenths. More important is that we keep learning as we don’t seem to have understood the bouncing as well as some of the others, it may also be that we’re lacking a bit of car pace.

“So, we’re expecting a tough couple of days where we need to focus on damage limitation but also continuing to experiment to see if we can find a better place to run the car.”

Russell said he was concerned about the threat from the Alfa Romeos and AlphaTauris – though the latter lost their way badly in the cool evening after flying in the afternoon warmth. He might add Alpine to that list, Fernando Alonso having put his A522 in a promising fifth. Who knows how far they have pushed that unique and heavily revised Renault power unit so far.

Arriving at the circuit with brand new 18-inch wheels for the first time at a grand prix weekend, Pirelli could not be sure what kind of strategies teams might attempt for the race. However, after Friday’s running, Pirelli’s Mario Isola said there was a much clearer picture about the kind of race teams can expect on Sunday.

“The delta lap time… is between 1.2 seconds between medium and soft and one second between hard and medium. Probably a two-stop strategy is the quickest on paper – using the medium and the soft.” Drivers will not go into qualifying with one eye on their race strategy this year, as the rule forcing those who reach Q3 to start on their used tyres from Q2 has been scrapped.

Looking like he might be best placed to begin his title defence with a win this weekend, at least going by the earliest indication, Verstappen admits that his prospects are “looking good” so far, but is remaining cautious until everyone reveals their hand during qualifying.

“You can see Ferrari is pushing hard and they’re very close, but that’s very exciting as well,” Verstappen said. “We have to wait and see a little bit also with engine modes tomorrow from all the teams to really see where you are.”