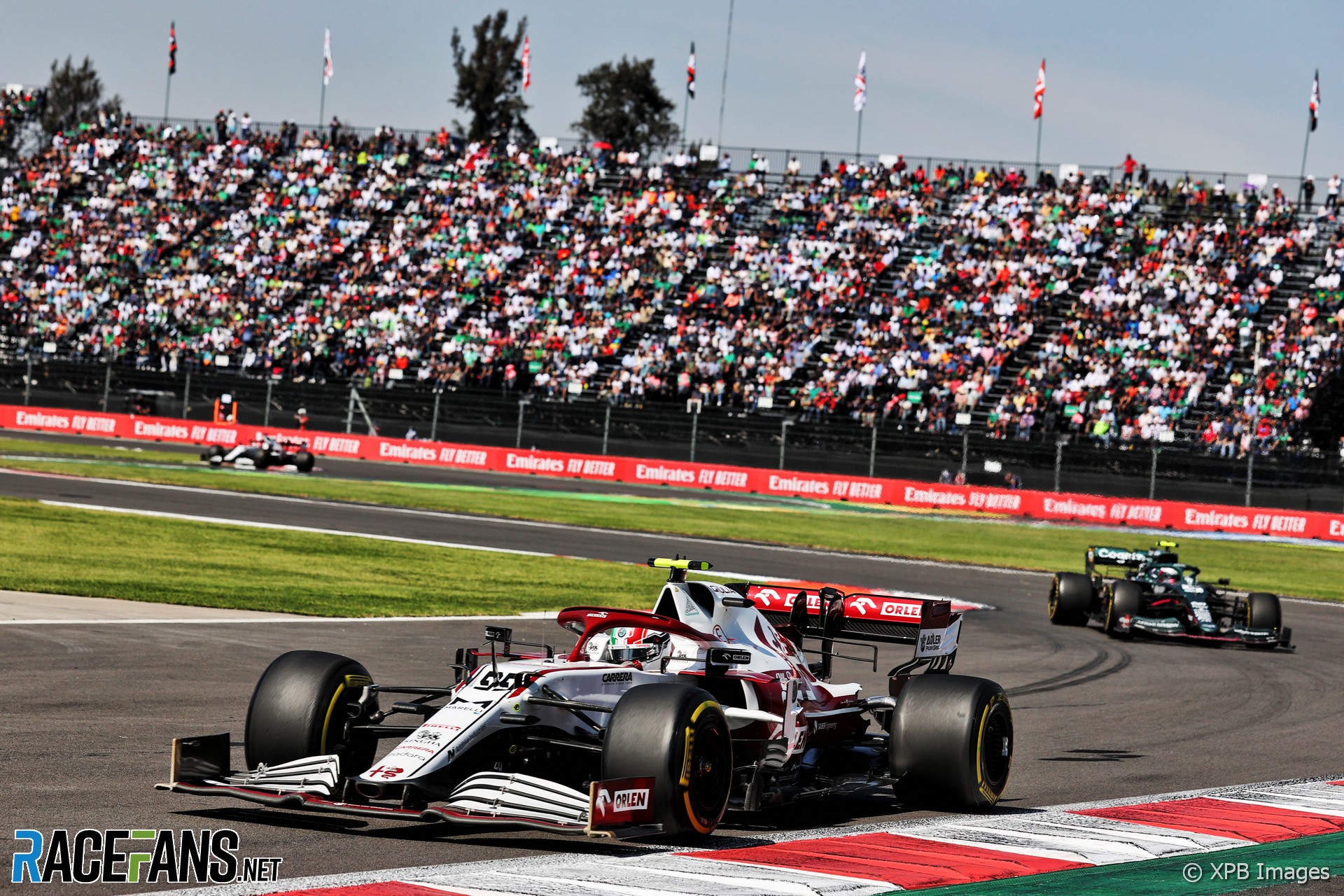 Antonio Giovinazzi told his team “thanks for the great strategy” on his radio at the end of the Mexico City Grand Prix.

But the downcast driver, who had just finished 11th for the third race in a row, was clearly being sarcastic. He slipped out of the points having run seventh before his only pit stop. Among the drivers he fell behind was team mate Kimi Raikkonen, who came in eighth.

“I’m just really disappointed because today we had a chance to score points with two cars,” said Giovinazzi after the race. “But on my side, the strategy was completely wrong.”

“We pitted too early, but I don’t think [that] was the issue,” he explained. “The issue was that when I came out, I was in traffic. The strategy didn’t work.”

Alfa Romeo looked in good shape at the end of the first lap. Giovinazzi took advantage of the mayhem at the first corner to jump up to sixth place. Raikkonen, who had to dodge several drivers who went off, stayed 10th.

It was to no surprise when Carlos Sainz Jnr motored past Giovinazzi after the restart, but the team was hopeful of holding onto seventh, which would have been their best result of the season to date.

“In turn one with all the incidents we lost a bit of position with Kimi, but we were very well positioned with Antonio,” the team’s head of track engineering Xevi Pujolar explained. “So there was still a good chance to score points.”

The team’s strategy for Giovinazzi was influenced by the progress of Daniel Ricciardo and Valtteri Bottas, who had pitted following their first-lap tangle, fallen to the back of the field and were working their way forwards.

“Everything was going to plan,” said Pujolar. “I think most people had planned with the medium and hard [tyres]. In terms of strategy it’s how early will you go and how much will you extend the stint with a hard.

“For us there was no incentive to go early, it was not needed, but at one point, Antonio started to struggle with the rear tyres. We were looking at the traffic behind, Kimi was still with good pace and we had that group with Ricciardo and Bottas that came in early and we knew that they were managing a bit the tyres.”

Alfa Romeo became concerned Sebastian Vettel and other drivers pursuing Giovinazzi would head for the pits early in an effort to get ahead of him.

“The last thing we wanted was to have everyone compress behind Antonio. So we decided to box Antonio. And we knew that he will go out with them, with Bottas and Ricciardo.”

However Pujolar admitted the team predicted Ricciardo and Bottas would be quick enough not to hold Giovinazzi up. “What we misjudged here is the pace of these two guys,” he said. “We thought that their pace will be faster or as fast as Kimi and all these [other] guys.”

An unhappy Giovinazzi complained “but now I’m in the traffic” on his radio after being told his team mate and Vettel had stayed out and were lapping quicker.

“That was not ideal for Antonio and we didn’t expect that,” said Pujolar. “At that point we compromised that race because Ricciardo was – I don’t know if he had some problem, because even if you manage you don’t lose so much time. So I don’t know which kind of problems they had but we were losing track time with Antonio.”

By the time Ricciardo and Bottas pitted, Vettel and Raikkonen had already changed their tyres and rejoined ahead of Giovinazzi. “With Kimi we were just managing the gap between Vettel and Alonso,” said Pujolar. “There was no incentive to come in too early.

“So once we got the right window, we went with Kimi. For sure, we wanted to get close to Vettel and see if we could challenge him but it was not possible.”

But for Giovinazzi, whose future in Formula 1 remains uncertain, it was another potential points-scoring opportunity lost. “Kimi stayed P8 and I was P7 at that moment, so the disappointment is because the team didn’t score as much as possible,” he said afterwards. “This is really hard for myself as well.”