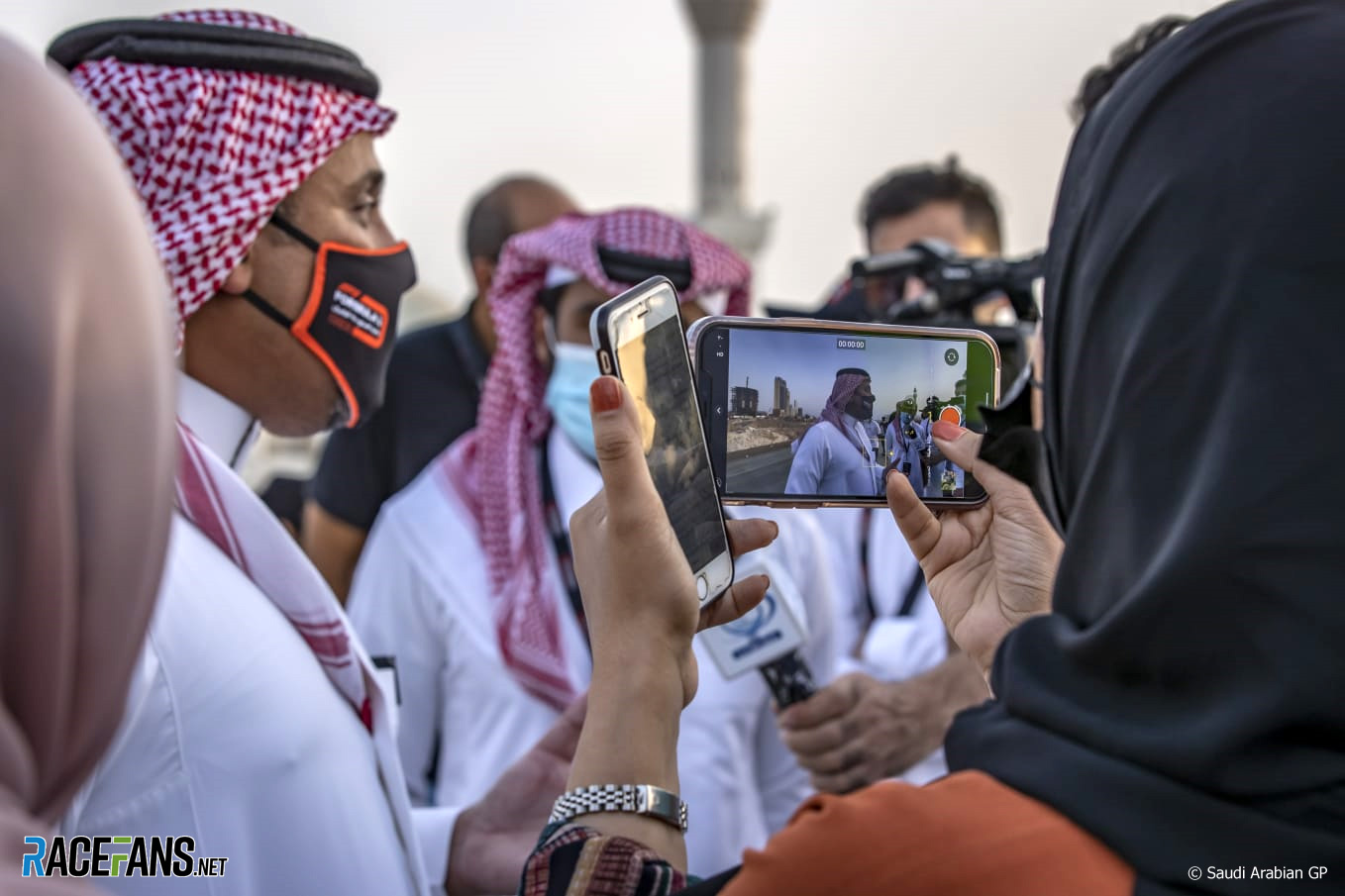 In the round-up: No dress code will be enforced for the first Saudi Arabian Grand Prix later this year, contrary to reports elsewhere earlier this month.

Male and female visitors to the Saudi Arabian Grand Prix in December will not be subject to a dress code at the Jeddah Corniche Circuit or public places in the city, RaceFans understands.

This follows reports claiming a strict minimum standard of attire would be imposed at the event, requiring attendees’ outfits to have long sleeves and long trousers or skirts below the knee. Visitors will be told they can dress in the same way they would for other races in the region, such as the Bahrain Grand Prix and recently-added race in Qatar.

Saudi Arabia’s citizens are ordinarily required to dress conservatively. Women wear a long, black cloak called an abaya which leaves only their hands and face visible; some also wear a veil. Men wear a traditional dress known as a thawb and a headdress. The requirement for female foreign visitors to wear an abaya was relaxed in 2019.

Milton Senna, the father of three-times Formula 1 world champion Ayrton Senna has died, according to the family’s official Instagram account. He was 94 years old.

“This F3 test is part of a larger diversity plan, with the goal to allow more female drivers to join our championship in the near future,” said F3 CEO Bruno Michel. “Today, it is still not easy for women to access the FIA single-seater pyramid. We want to help change this.”

When I was in Canada recently I had the chance to visit my old school to collect an award in recognition of my racing. It was a special feeling to visit my old campus and see some familiar faces again 😊 pic.twitter.com/w8ILMZEEaX

"Last year we only had 3% diversity in our team. We're now at six, and we're on the goal of getting to 25% in the next four years. I want to look back on this sport in the next 10, 15 years and just see it more representative of the outside world."

Like his team mate, Max Verstappen was also unwell during the United States Grand Prix weekend, according to Red Bull motorsport consultant Helmut Marko, who said the driver "brought himself back into shape with breathing exercises and drinking".

"The notion of sitting every alternate year out, or rotating with other states to share it, is not on our agenda. We want it every year because it is such a great asset for Victoria."

Here's why America's Formula 1 team is so bad (Fox News)

Gene Haas: "It takes millions and millions of dollars. They need a benefactor to help an American driver race in Formula 1. For all the talk about it, there’s no one that’s ever stepped up to do that."

"Villeneuve's racing income from those years was routed to a Quebec corporation, Newtown Racing Inc. Its financial statements, filed in court, show it had total revenues of more than $1 million between 2011 and 2013. But losses booked in 2010 and 2012 largely offset that income, and the company paid a total of just $27,000 in tax over those years."

"If you have this race-to-road transfer of progress that’s perfect, that’s where motorsports has to be."

@Matthijs likes the look of the track changes at Yas Marina for this year’s season finale:

I am really looking forward to this. For me personally they changed the worst 2 parts of the track and replaced them with two great corners. This will change the nature of the track and the setup of the cars drastically and could make this track a modern classic.
@Matthijs

63 comments on “No dress code for Saudi Arabian Grand Prix”