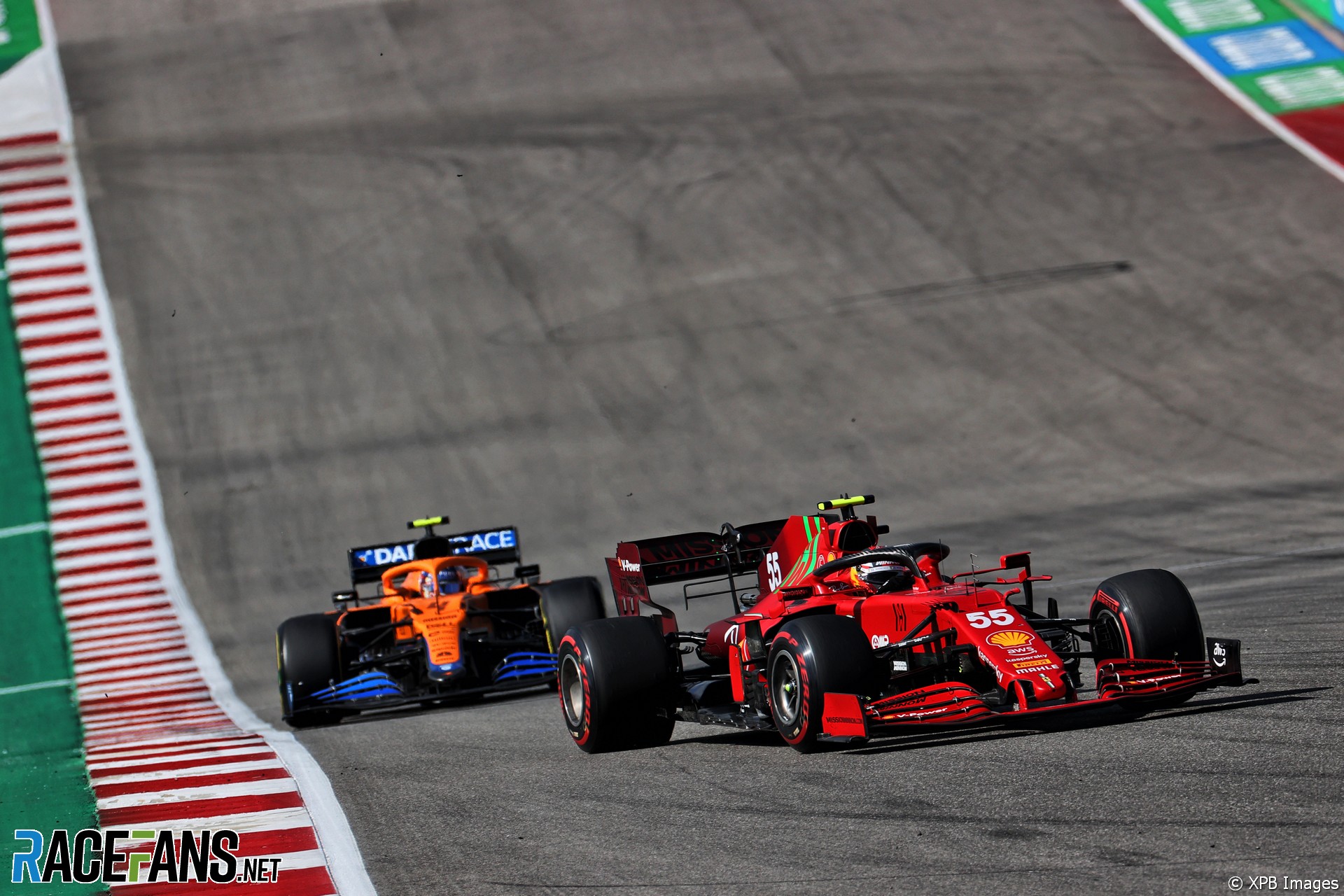 Carlos Sainz Jnr appeared to have ignored an instruction to let Lando Norris pass him during the opening stages of the United States Grand Prix.

However onboard footage revealed the Ferrari driver did follow the order from race control to let the McLaren driver pass him. Sainz immediately reclaimed the place, however, with what McLaren team principal Andreas Seidl called a “clever” move.

Sainz was told to let Norris past because he had gone off-track at turn 12 while maintaining his position ahead of the McLaren driver on lap one. Daniel Ricciardo also went off at the same corner in his McLaren, and Sainz immediately let him through.

On lap six, Sainz was told he had to let Norris by. “Carlos we have been instructed by race director to give a position to Lando for turn 12 lap one, I’m afraid,” said race engineer Riccardo Adami.

Sainz appeared to have confused the two orange cars in his mirrors. “No, I gave it to Ricciardo back in turn 16,” he replied. “I lifted on purpose. It was not Lando.”

“I already gave up one position to them, please,” he added.

As Sainz began the next lap Adami told him: “We have been already discussing so I’m afraid we have to do it now, let him by.” When Sainz asked where he should let the McLaren through Adami told him: “Right now, before turn 11.”

Sainz, who had been almost two seconds ahead of Norris, eased off and allowed him to pass between turns seven and eight. However Sainz stayed close to the McLaren through the next three corners and crossed the DRS detection line approaching turn 11 within a second of his rival.

He was therefore able to use DRS on the following straight, and launched his Ferrari down the inside of Norris from a considerable distance back to reclaim the place at turn 12.

Seidl said race control made the correct decision by ordering Sainz to give up the position. “From my point of view it was clear that Carlos only got Lando back because he went off the track,” he said. “So that’s why we expected that he had to give the position back which then he had to do later on.

“But unfortunately he did it in a clever way so that he could actually overtake Lando back straight away on the next straight so we couldn’t benefit from that.”

The McLaren team principal said he took his “hat off” to his former driver for his cunning re-pass. “He did it in a clever way because the regulations allow to do it like that.”

31 comments on “How Sainz obeyed order to let Norris past, then re-passed him, in “clever” unseen move”