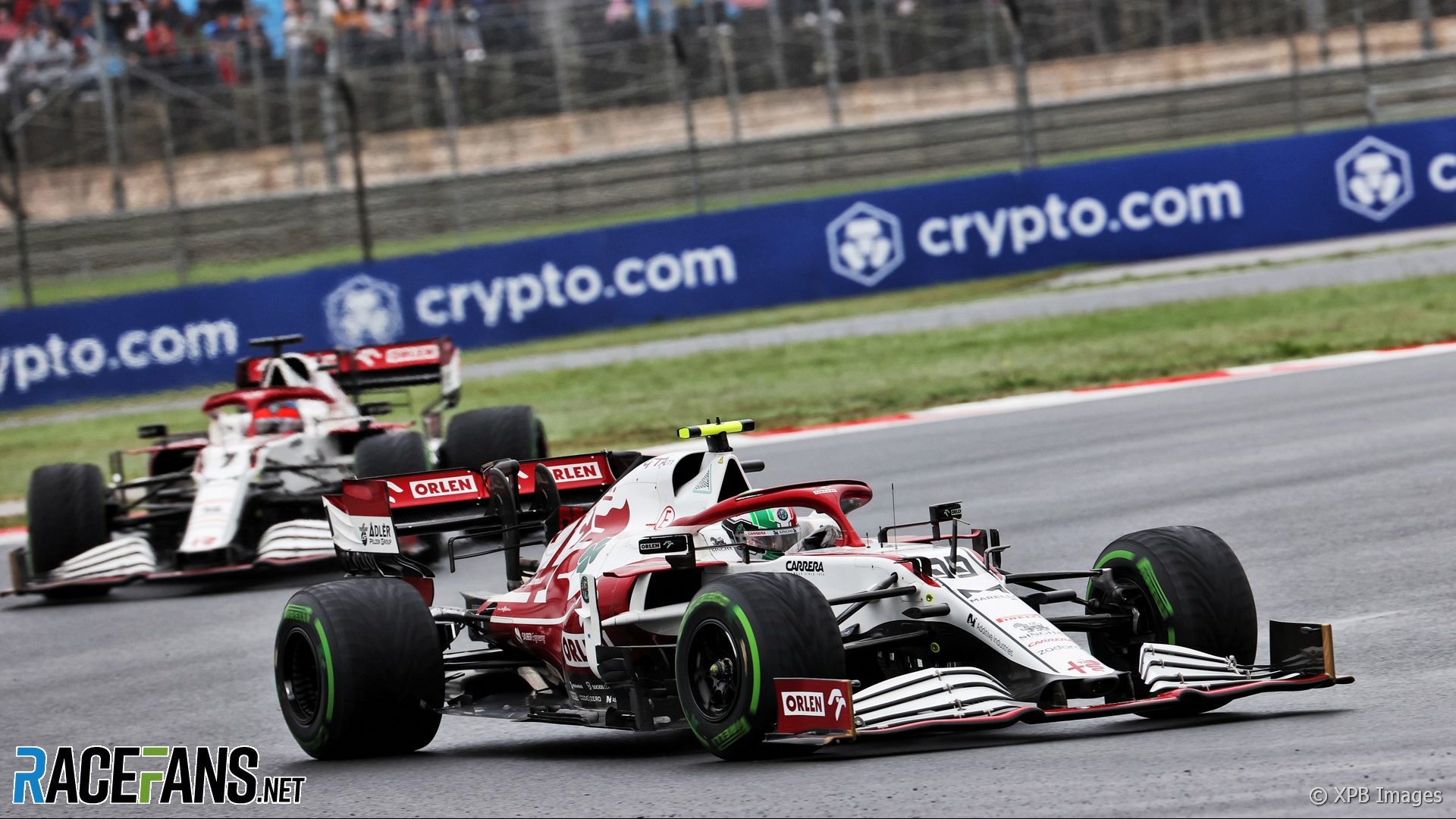 Alfa Romeo left a grand prix empty-handed for the 12th time this year on Sunday. But it could have turned out differently had Antonio Giovinazzi followed his team’s instructions.

Giovinazzi crossed the finishing line less than a second behind the final points scorer, Esteban Ocon, who struggled to the flag in his Alpine after deciding not to change his tyres.

But several laps earlier Giovinazzi had ignored an instruction to let his team mate pass him. Raikkonen lapped much more quickly before getting stuck behind Giovinazzi, and would have stood a better chance of catching and passing Ocon before the finish.

The 2007 world champion changed to a fresh set of intermediate tyres three laps before Giovinazzi and was flying in the second stint, lapping quicker than race leader Valtteri Bottas at times. Raikkonen was catching his team mate at up to two seconds per lap as they ran in 12th and 13th places.

Giovinazzi was given a “reference” lap time of 1’33.5 but was running in the 1’35s. At one point his race engineer Jorn Becker told him he was “losing everywhere in braking”.

On lap 50 Raikkonen lowered his lap time to a 1’32.5, a massive 2.8 seconds quicker than Giovinazzi. Alfa Romeo made the call to swap their drivers, which was communicated to Giovinazzi twice.

“Swap position with Kimi behind into turn one, he’s much quicker now,” said Becker. Giovinazzi kept his position, but told the team he would increase his pace. “Turn eight is better for the rear so I will push now,” he said.

The team gave him a new reference lap time of 1’32.5, and though Giovinazzi did improve his pace, he only got down to a 1’33.1. Meanwhile Raikkonen, who had been told “we will swap position at turn one”, could only wait behind his team mate.

The pair were catching two cars ahead: Ocon and Daniel Ricciardo, who was also struggling with his tyres. Both Alfa Romeo drivers passed the McLaren on lap 55, and began their final lap five seconds behind Ocon.

“Ahead of Antonio is Ocon, Ocon is P10,” Raikkonen’s engineer Julian Simon-Chautemps advised him. “Yeah maybe we should have thought about it a bit earlier, we could catch him,” Raikkonen replied.

Giovinazzi almost caught Ocon, but still came out of the final corner too late to pass the Alpine, crossing the finishing line seven-tenths of a second behind. Raikkonen had been on his tail until turn 12 on the final lap, when he ran wide, then had to let Max Verstappen by to lap him.

“Antonio was told,” Raikkonen heard on his radio after crossing the line.