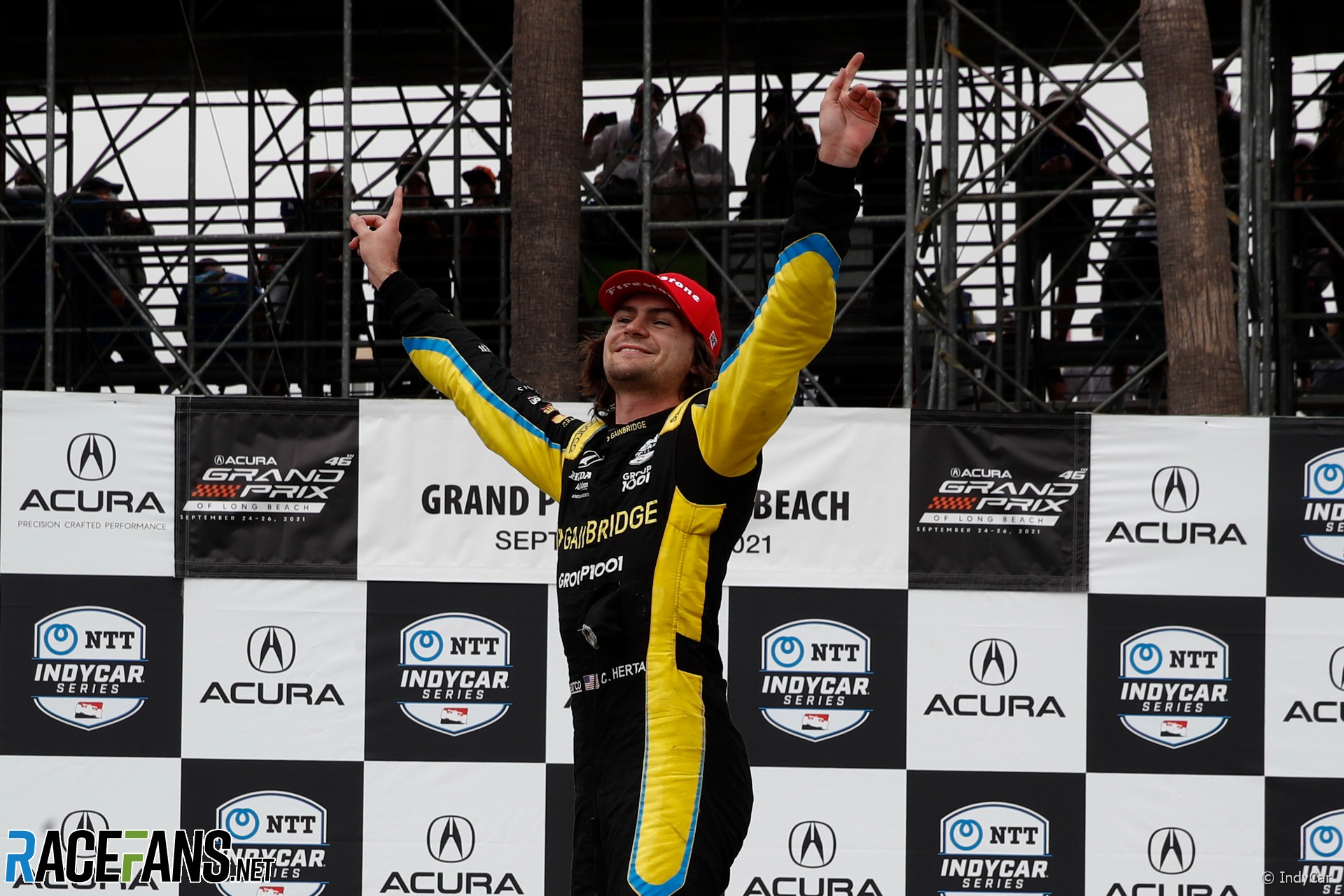 After an unforced error during qualifying for the IndyCar season finale at Long Beach, Colton Herta didn’t think it was possible for him to win from 14th on the starting grid. But with superior race pace, a surprised Herta drove to the top step of the podium in his ‘home race’ to close his campaign on a high note.

“It was fun to come from the back. A little bit more stressful, but it was a lot of fun,” said Herta after the race on Sunday. “Without the muff-up in qualifying, I think we could have had a great shot at pole, and have another dominant race.”

Herta finished the 2021 season with back-to-back victories in his home state of California. He won one week ago at Laguna Seca Raceway from pole position. But it seemed that winning the Grand Prix of Long Beach was out of reach after the first round of qualifying, when Herta hit the wall at turn eight during his first run on the primary compound tyres. The contact with the wall bent the toe link on the left-rear suspension, and that piece broke completely on his second run, preventing him from posting a time on the softer, alternate compound tyres.

“I was pretty upset at myself for making that mistake of hitting the wall in qualifying and kind of taking us out of contention – when I think we really should have done well.

“But in the race, we were just fully focused on trying to get the best result out of it. You kind of know by, maybe, lap five or six what kind of car you have, if you have something that could be good in the race… I kind of knew. I didn’t think we had a shot at winning, to be honest. I thought a podium would be a reach, but possible. I thought that was going to be the maximum.”

“I was kind of surprised how quick we were at the start. I was very surprised when we were able to keep going after hitting Ryan [Hunter-Reay] in the rear after [Ed] Jones spun Pato [O’Ward]. We had a little bit of damage to the right front, but luckily it wasn’t enough to kind of take us out, we could keep running around and be quick.”

Herta gained four positions on the opening lap alone, thanks in part to the contact between Jones and championship contender O’Ward which sent the McLaren SP driver spinning in the tight hairpin turn 11. With the track partially blocked, Hunter-Reay had to check up in the apex, and Herta had no time to avoid making contact with his Andretti Autosport team mate’s car.

The collision left Herta’s with minor damage. “The steering wheel was pretty right-hand down for most of the race,” he explained. “I thought it was getting worse.

“Every time I would turn left, I had a lot of understeer. But, when I turned right, the thing would chuck it in. It was really fast. I needed to get a little bit used to that. Once I did, it wasn’t that big of a problem.”

Winning at Long Beach is extra-special for Herta, who grew up less than 100 kilometres north of Long Beach in the city of Santa Clarita. “I was two weeks old when I first came to Long Beach. My father [Bryan] was driving in 2000.”

“I remember growing up around here, coming to this race every year when I was five, six, seven, all the way up until I was racing in IndyCar in 2019. I can’t believe I won it on my second try. I’m super happy. This is a big one for me.”

Herta’s Long Beach win was his third of the season, tying him with champion Álex Palou for the most victories in 2021. It also propelled Herta to fifth in the final IndyCar Series championship standings – which could have been much higher, potentially, if not for four costly retirements during the season.

But Herta sees no need to make drastic changes in his sector of the Andretti Autosport camp for him to compete for a championship in 2022. “[We] just need to clean it up a little bit,” he said. “We’ve been so close.

“I think there have been three or four other times we should have won, and we didn’t for different reasons. I’m not too worried about that right now. I think, give a month and then look at it afterwards, kind of into the off-season, debriefing on 2021, what we need to do better – to kind of be in Álex’s position coming into the final round in 2022.”