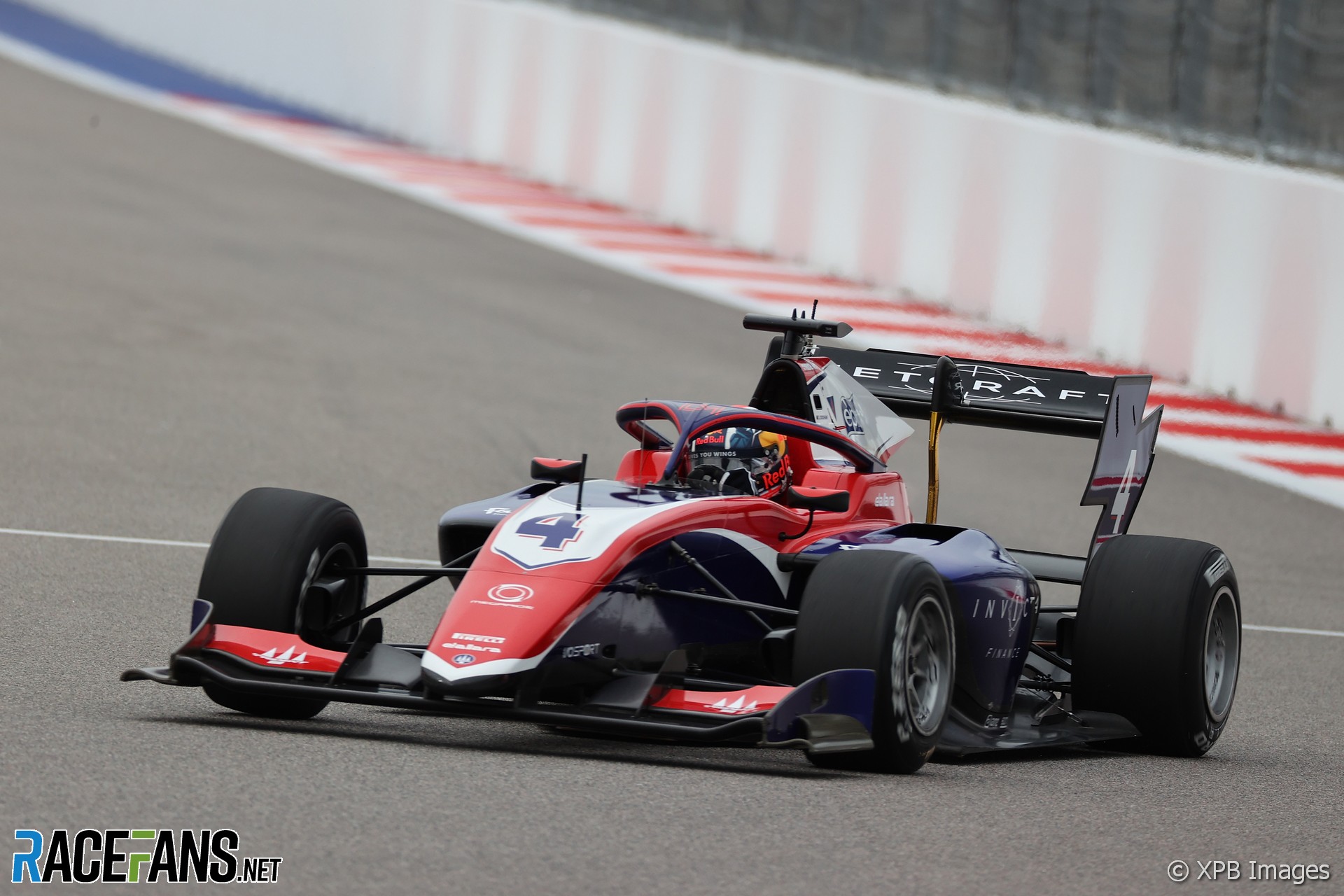 Jack Doohan won the final Formula 3 race of the season and helped his Trident team to clinch the championship – after ignoring their pleas to hand the lead to Clement Novalak.

First and third places for Doohan and Novalak meant Trident overturned a 29-point deficit to rivals Prema and clinched the team’s title. But a series of increasingly tense radio messages made it clear they were unhappy with Doohan’s refusal to give up the lead on the way to his fourth win of the year.

Doohan took pole position ahead of team mate Novalak and the two Trident drivers kept their positions at the start. But Doohan was never able to break clear of his team mate and the pair came under increasing pressure from ART’s Frederik Vesti.

Novalak attacked Doohan on lap nine, attempting to pass around the outside of turn two, but running wide. He emerged from the corner ahead but immediately ceded position back to his team mate.

Novalak kept up the pressure as Vesti, who had passed Juan Manuel Correa and Johnathan Hoggard to take third place, closed in. The Trident team became increasingly anxious about holding on to victory, and urged Doohan on the radio not to fight Novalak.

At first he complied, holding the racing line into turn two as Novalak sent another move up the inside of him. Novalak ran slightly wide, however, staying on-track but drifting out far enough for Doohan to have a run on the inside of turn three. The pair ran wheel-to-wheel again, Doohan emerging ahead, and Novalak slipping back into the clutches of Vesti after running through the tyre marbles.

Novalak was powerless to prevent Vesti drawing within range and passing him for second place. But Doohan had enough in hand to out-run the ART driver to the flag by three seconds.

With the top Prema driver Arthur Leclerc taking seventh, Olli Caldwell 11th and newly-crowned champion Dennis Hauger slipping to 24th after being spun by Oliver Rasmussen, that ensured Trident clinched the team’s championship by six points. But they remained unhappy with Doohan’s driving.

Doohan gave an impassioned defence of his approach. “I’m sorry guys but I race for myself,” he said. “If he’s quick enough he’ll make the move and he’ll be able to stick it.

“I’m not going to be anyone’s wing man. I’m racing my own through the year. I understand it’s the team’s championship. I want to win too. I gave him the opportunity and if makes a mistake I’m going to capitalise on it. I’m a racing driver.”

“Sorry Jack I don’t agree,” he was told. “Thank you anyway for another victory.”

Behind the podium trio, Logan Sargeant emerged from a hectic scrap early in the race to claim fourth ahead of Jak Crawford and Hoggard. Leclerc’s aggressive start helped him take seventh place ahead of Victor Martins, Ayumu Iwasa and Caldwell. Correa slipped out of the points to 11th.