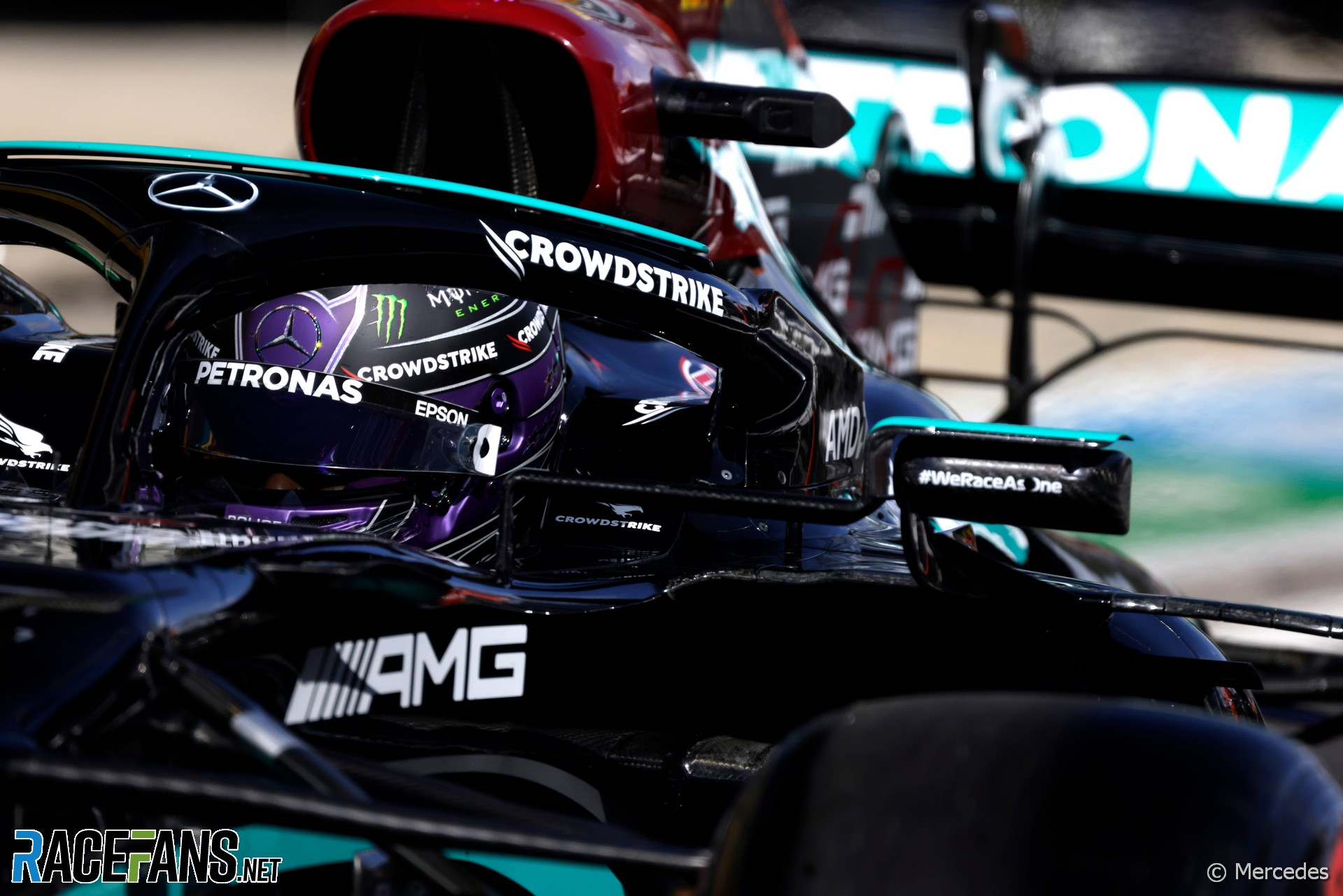 Red Bull’s decision to fit a new power unit to Max Verstappen’s car at Sochi, triggering a penalty he was inevitably going to take at some point in the season, was widely expected.

But another, more surprising change may be on the cards.

The obvious conclusion to draw from Friday’s practice sessions is that Mercedes have the upper hand around Sochi. Verstappen’s power unit change and consequent penalty means Lewis Hamilton and Valtteri Bottas are unlikely to be challenged at the head of the field in qualifying and the race.

But there are suspicions in the Red Bull camp that their engine change for Verstappen may prompt their championship rivals to do the same. Fitting a new power unit to Hamilton’s car would send him to the back of the grid too

The decision will rest on whether Mercedes believes Hamilton is likely to need a replacement before the season ends. His team mate took one last time out at Monza.

Of course Mercedes aren’t going to signal to Red Bull whether they are likely to change their power units, and haven’t firmly indicated one way or another so far. Yesterday Hamilton said “at the moment we have no plans to put in a new engine”.

With the championship fight so finely poised, Mercedes cannot afford to risk a race-ending power unit failure. If they were seriously considering changing Hamilton’s power unit, they now have a strong incentive to do so this weekend, as Verstappen’s points-scoring potential is already seriously compromised.

It could make for the strange sight of the two championship contenders lining up at the back of the grid, with Charles Leclerc’s Ferrari and its fresh power unit for company.

If Hamilton does take a penalty, Mercedes are still well-placed to win. Bottas was quickest in both of Friday’s sessions and looks a strong bet for pole position.

The sole Red Bull driver in contention for a start at the sharp end, Sergio Perez, has a good record at Sochi, having never failed to secure a points finish. He was not quick during the Friday practice sessions, only squeaking into the top 10 in second practice, but this was partly a result of Red Bull experimenting with different set-up options.

Perez ran a higher downforce level on Friday while Verstappen’s car was trimmed out. The two are likely to move closer towards each other for their race set-ups.

Complicating matters further, Saturday is expected to be very wet. Heavy rain is predicted for Saturday in Sochi, with little let up before the light begins to fade at around 6pm.

The rain may ease sufficiently for F1 to run qualifying on Saturday afternoon. As seen at Spa, qualifying is easier to run in the wet as cars don’t have to follow each other and can avoid the spray that lowers visibility to near-zero.

It’s unlikely that drivers with nothing to gain – Leclerc and Verstappen (and potentially Hamilton) – would bother to participate. A wet qualifying session around the barrier-lined track would present too much risk of damage.

Lando Norris was extremely quick in the wet at Spa – and finished second practice fourth fastest today. Pierre Gasly, who was third fastest this afternoon, is also often strong in wet conditions. However Norris’ Spa crash also illustrates the risk of crashing in such conditions.

As Fernando Alonso pointed out, standing water had been a problem during the one session of wet running at the circuit previously, in 2015. Sochi is a very flat circuit, which doesn’t lend itself to rapid drainage.

If running proves impossible on Saturday, Formula 2 or Formula 3 may find their Sunday morning session pushed aside to make way for F1 qualifying on a dry or drying track. If standing water drains then it could be, effectively, a dry session – in which case, Mercedes would seem to have an obvious upper hand.

On a drying track, drivers will take their risks between the barriers knowing that a crash could cast doubt on their participation in the race a few hours later.

There is one, final, risky permutation. If no running is possible at all until the Grand Prix start time, it’s possible that second practice times would decide the grid. At the start of second practice, F1 race director Michael Masi was heard confirming to Red Bull that second practice could be used to determine the race starting grid. After Formula 3’s first race of the weekend was rescheduled to Friday, it was clear that race organisers were taking the risk of a Saturday wash-out seriously.

However Aston Martin CEO Otmar Szafnauer doubts this will happen, and said the team “didn’t alter our programme that much” during second practice as a result. “I think some other people tried to perhaps get a bit higher up on the times sheets just in case this session is used for the grid. But we didn’t do any of that.”

“I think we’ll get qualifying in,” he concluded. “By hook or by crook.”