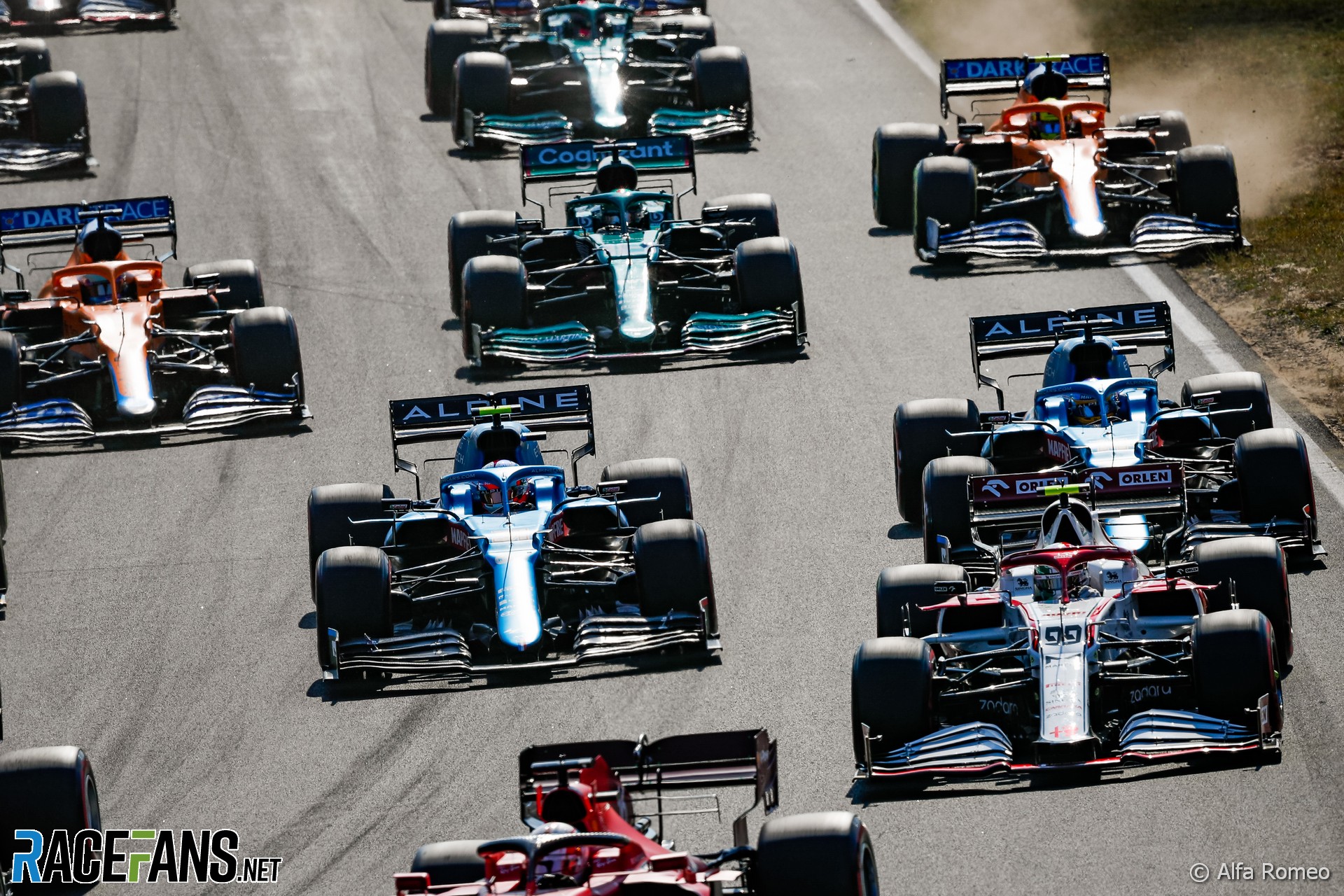 The biggest decision faced by Formula 1 this year is arguably its next power unit format. For of all the regulations – technical, sporting, financial and engine – it is the only one that leaves the sport at the mercy of outside suppliers who could leave F1 on a whim without as much a backward glance. As Honda will do at the end of this year.

The sporting regulations are within the gift of the FIA (working in conjunction with commercial rights holder Liberty Media), while the budget cap is a fait accompli, and can only get tighter. The chassis regulations are a joint project between all teams, governing body and CRH – plus teams have little choice other than to accept them or sell or shutter their businesses. After all, where else would they be paid to race?

However, due to their complexity and eye-watering costs Formula 1’s hybrid engines are now the sole preserve of manufacturer-backed operations – with the current suppliers being Mercedes, Ferrari, Renault and Honda. The last nascent independent engine operation – PURE, founded by Craig Pollock in 2011 in anticipation of the 2014-2021 formula – collapsed after a year due to a lack of investment. That is telling.

Power unit suppliers effectively have the worst of all worlds: they are obliged to supply teams at prescribed prices that don’t even begin to amortise their costs; are required to supply independents with equal specification engines, thus running the risk of their ‘works’ outfit being shaded by a customer team; and, last but not least, engines are seldom lauded in victory, but regularly blamed – directly or implied – in defeat. Who needs that?

There is no world championship for engines. Who besides hardcore fans recall that Brawn walked both 2009 titles with Mercedes or that Red Bull swept the next four years powered by Renault? Power unit suppliers don’t share in F1’s spoils – they do, though, receive a token $10 million per year – nor do they attract commercial sponsors. They don’t have seats on the F1 Commission (as in the past), having only consultative committee status and minority votes on power unit regulation changes.

Indeed, given its treatment of power unit suppliers over the years it is surprising that F1 has any engine brands at all – but little wonder that from next season all power unit suppliers will be directly linked to teams after Red Bull recently struck a deal to run rebadged Honda units, then subsequently announced plans for a full in-house power unit division to be known as Red Bull Powertrains.

Where Mercedes was once exclusively a power unit supplier (to McLaren) it soon realised it needed to own a team to control its destiny and purchased Brawn. Renault yo-yoed about as team owner and engine supplier – variously operating out of Paris and Enstone in the UK – before eventually returning in 2016 as full team owner, rebranding the operation as Alpine from this year.

The engine situation marks a far cry from the past, when F1 drew upon such as Coventry Climax, Repco, Cosworth (often badged as Ford), Weslake, Matra and Ilmor (Mercedes) with even McLaren’s Porsche-built TAG units being independently funded. Note: this list includes only the grand prix winners amongst them, with the likes of Hart, Judd, Mecachrome, Motori Moderni, Mugen and Zakspeed deserving honourable mentions.

The fact is, though, that F1 simply cannot race without engines, and thus attracting additional power unit suppliers is absolutely crucial to the future stability of the sport. Where previous Concorde Agreements locked teams in for the full duration, under the current covenant they may walk away with less than a year’s notice – by 31 March for the end of any given year.

Imagine the situation F1 would find itself in should Mercedes and Renault decide to exit at such short notice – much as Honda, Toyota and BMW abruptly did shortly before the 1998-2009 agreement expired, taking their engine supplies with them – which would leave only Ferrari and pseudo-Honda units to service ten teams. Thus, Mercedes and Renault know they have vice-like grip over the sport.

F1’s challenge is, though, to add to add a supplier (or two) without alienating the existing base – and hence a series of summits for C-level executives to ascertain what terms and conditions would be attractive to, say Audi, without chasing Mercedes from F1. No easy task, and the closer they get to nailing down details so the further apart they all appear to be.

According to sources that much became apparent during the latest such meeting – held on Sunday in the Monza paddock – where the bickering started in earnest.

Notable absentees, though, were Toto Wolff – who is not a director of Mercedes High Performance Powertrains – and Ferrari’s team principal Mattia Binotto, a former F1 engine guru. Also not invited were team principals of teams without engine operations of their own: McLaren, AlphaTauri, Aston Martin, Williams, Sauber and Haas.

The first sticking point, albeit overcome, was the question of retaining the MGU-H, which caused major issues for Honda when the company returned in 2015, and proved horrendously complex and expensive. Mercedes, a proponent of this tech, offered to sell standard units to all and sundry, something both VW brands were obviously set against for various reasons, not least Teutonic pride. Thus, it will be dropped.

Then, the three incumbent suppliers wrote a letter to the FIA/F1 calling on them to levy a substantial commitment fee (said to be $50m minimum), to be forfeit and split amongst the trio should a newcomer renege after committing to enter as a power unit supplier. This raised the question of Red Bull’s status given it is not currently a power unit supplier but will be when the new formula arrives – with timing being another sticking point.

As an aside: F1 lawyers were allegedly concerned that the ‘commitment fee’ could breach EU cartel laws, and if so, where does that leave the $200m payment required from prospective entrants, also designed to be split amongst a?

At the time of striking its March 2021 deal to acquire Honda’s engine technology from 2022, Red Bull requested an engine-freeze, arguing it would be unable to develop power units at such short notice. This was eventually agreed to, although Ferrari insisted that the incoming engine formula be brought forward a year to 2025 – at the time this seemed an insignificant concession and was therefore adopted without much ado.

Crucially, though, this pushed the power unit regulations are out of sync with the 2021-2025 Concorde Agreement, which stipulates the governance process for any regulation changes during the currency of the agreement. Thus, any change of power unit format for 2025 falls within the current agreement, enabling teams to have input into the regulations; after that the sports masters could impose whatever they see fit.

All well and good, except that given their lack of experience in designing and producing in-house F1 engines VW Group and Red Bull both requested a 2026 introduction to permit as long a development window as possible. See the conflict?

A 12-month extension to the Concorde Agreement was proposed by those present, but this overlooks that the covenant has 12 signatories – FIA and F1 plus ten teams – not merely three or four teams who happen to be engine suppliers.

Asked whether he would countenance an extension, an independent team boss said, “It depends on what’s in it for us…” A logical answer given the independents are targeting lower costs and increased revenues in future.

Reduce the development window and VW’s brands may walk; extend it a year and the teams have no direct say in future engine regulations, with the independents holding the balance of power and inclined to exert it. In addition, under an extended Concorde the $200m ‘anti-dilution’ fee remains payable but could fall away under a future Concorde. Thus F1 would need to waive if the agreement is prolonged, or VW Group would need to pay $200m for a single season. Either way it’s a mess, and possibly even an illegal one.

Not for the first time has F1 discovered that its actions can bring unintended consequences.

The lack of experience with F1 powertrains also manifested itself in discussions over budget caps for engines: Levels of $120m-$160m were discussed – to put these numbers in perspective consider that in 2019 the Mercedes HPP engine operation spent about $200m of its $270m turnover on F1 engines, but that the team’s F1 budget is capped at $145m for this year – but VW Group pushed for concessions on the basis that they need to ramp up.

The same arguments were forwarded about dynamometer runs and other such activities: Mercedes, which has the most efficient engine cost base of all on account of its in-house work, pushed for the lowest caps and allowances while the rest went incrementally higher given their greater reliance on out-sourcing and/or inexperience. “It’s unlikely the twain shall meet,” one of the participants told RaceFans afterwards.

On the technical front it was proposed that the ‘bottom end’ – effectively the crankcase – be prescribed and that cylinder heads and valve train be free within the regulations, with some form of (yet to be defined) synthetic or e-fuel providing propulsion. All this was broadly outlined previously, with the target being 800-1,000bhp, split 50/50 between internal combustion engine and hybrid power.

Kinetic energy recovery systems – whether operating on rear or all four hubs is yet be decided – would be open provide the enhanced levels of electrification, although energy stores would, be prescribed to prevent what a source termed an “arms race on batteries”, and more is the pity for this is an area where the greatest performance advances could potentially be made. Hence restrictions on development.

But F1 should heed the example of Formula E: BMW, Audi and Mercedes all gave notice of exit from the all-electric series, the implication being that standardisation of performance-differentiating components made it technologically unattractive. F1 may discover that by ‘dumbing down’ batteries and other technologies it kills the relevance of the sport.

F1’s customary navel-gazing fashion leads it to believe that the sport needs only to make the power unit formula sufficiently attractive for VW Group to enter, whether via one or both its brands. This is just one part of broader equation: they need to evaluate whether to commit solely as a power unit supplier – and to whom – or whether to enter as team owner(s), and thus whether to acquire an existing outfit or start a team from scratch.

That is far tougher set of decisions to take than to simply drop the MGU-H, which the incumbent power unit suppliers view as a major concession, and therein lies F1’s conundrum: does F1 need VW Group more than VW Group needs F1?

After the latest meeting, held on grand prix Sunday in Monza, the FIA and F1 said in a joint statement, “Today a meeting took place involving the FIA, Formula 1, and existing and prospective power unit suppliers on the potential new power unit.

“The discussion was positive, and progress was made. Some details remain to be addressed, however, we expect these to be resolved in the coming weeks.”

The biggest problem is that time is fast running out: Todt’s third and final mandate as FIA president ends on December 17, and he is determined to tie up all loose ends before he departs office. Such time pressures could, though, force VW Group to take a hasty decision – and as history attests, manufacturers find it a lot easier to say ‘Nein’ to F1 than ‘Ja’.