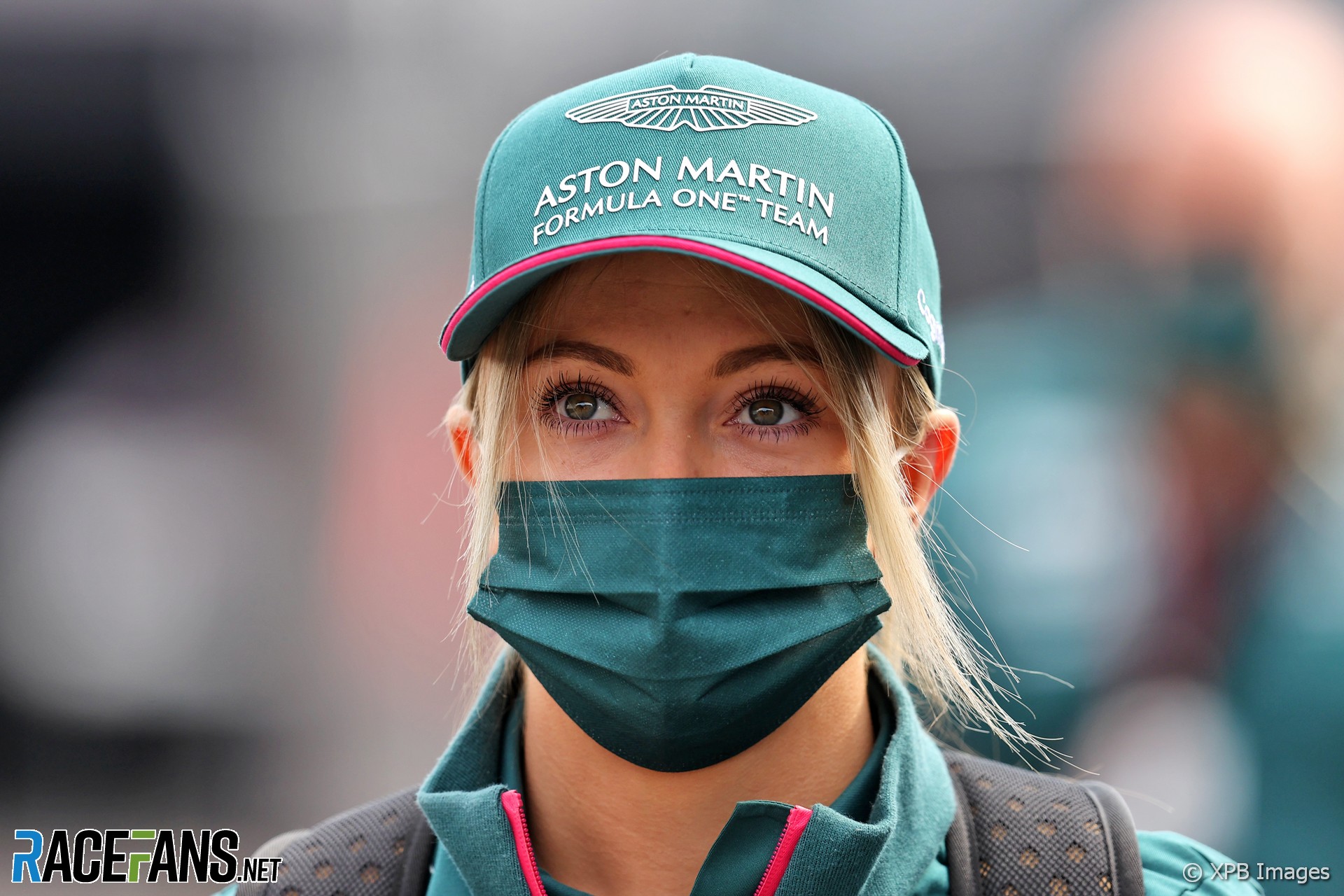 Jessica Hawkins spent the 2019 season racing in W Series. That helped her reignite a racing career which had taken an unexpected diversion into Fast & Furious live shows and setting the lawnmower world record for Top Gear.

Having found her way back into single seaters, Hawkins was signed to Aston Martin’s F1 team as a brand ambassador in May this year .

Now competing alongside her partner Abbie Eaton, Hawkins is getting used to racing in the real world again and being part of an F1 team. RaceFans caught up with her during the Italian Grand Prix weekend.

RF: How have you settled in since joining Aston Martin in Baku?

Hawkins: “It’s much, much of the same. Obviously I’ve been away for the last couple of weeks because I’ve been racing myself. So it’s really nice to come back into the team this weekend and I was really excited to see everybody and it was a warm welcome again, so that was great.

“I’ve been doing a lot of sponsor events and media work and I would have started to use the sim already, but because there’s quite a lot of time constraints and I have my racing, I didn’t want to confuse the sim with the [W Series] work that I’ve been doing, so hopefully that will build up over the winter.”

RF: W Series has its race weekends alongside F1, what’s the switch like between that and being part of Aston Martin, over a weekend and working with a driver like Sebastian Vettel?

Hawkins: “Well obviously, with my racing, they do very similar things to if I was racing, it’s just there’s a lot more of them. So it’s nothing completely that I wouldn’t expect.

“It’s just the extent that they go to with everything; the technology and everything is far superior in Formula 1 obviously there are way more updates and way more regularly as well.

“It’s just nice to be part of the team and all the stuff like that just makes me feel so welcomed. And Seb has been amazing, he took me to me to see the banking after the track walk on Thursday, which was great.”

RF: Speaking of W Series, how has your season been so far – was it difficult to come back, after no real-world racing for the championship in 2020?

Hawkins: “I have really struggled [in] the first season, to be honest.

“I did picture it being a tough start to the year just because I’m racing against people that are racing regularly the last two years and I haven’t. So I did envisage a tough start and then progress over the season, which is exactly what’s happened.

“But it maybe was a little more tough than what I was expecting. I was hoping to start a little bit higher than what I did. But the results are definitely getting stronger and stronger towards the end of the year. And I’m just hoping to carry that confidence forward into into Texas.”

RF: W Series’ second calendar has been more compact than the first. Has that made it easier to build up your confidence?

Hawkins: “Obviously it was a late start to the season, then when we had loads of races in quick succession, which was really quite nice, actually there’s not too much time to overthink or anything like that.

“For me it was great because obviously I’m still getting back in the swing of it. So that was great for me and I think that shows with the results, really.

“We’ve got a little bit of a break now, which is nice to just relax a little bit. I think everyone needs it, including the team, not just the drivers, but the team as well. I like being busy.”

RF: W Series has come under some criticism over the time it’s existed, most recently from the head of the FIA Women in Motorsport commission, Michele Mouton. Of course, we all respect her but what did you make of her comments, that professional drivers would not want to join what’s supposed to be a junior series?

Hawkins: “Everybody’s entitled to their own opinion, I believe, and she is entitled to think what she thinks. What is she trying to achieve by criticising the series? I don’t think she quite understands [it].

“I respect her for what she’s done, but I don’t think she understands the point of it. How can a series, which is giving female racing drivers the opportunity to go racing that wouldn’t have that opportunity without W Series, how is that ever a bad thing? How could that ever be a bad thing?

“I suppose she may have been in a better position, more able to get access to other series, if she wouldn’t have faced the same issues that some us have. So she’s entitled to her opinion.”

RF: Does W Series offer an opportunity in numbers, by not being the sole representative of women in motorsport in a paddock and having that pressure, as well as the usual racing stresses?

Hawkins: “I’d say that what people tend to do is pick one female and then say ‘it’s going to be her, it’s going to be her’ when there’s actually many talented females out there but with the right opportunity and the right backing behind them could probably do a very good job.

“It’s just that some have had more of an opportunity and more backing than others. So their profile’s a bit bigger or their results a bit better. But that’s the same in all motorsport, I guess really it’s the same with the guys.”

RF: Aston Martin – and particularly Sebastian Vettel – have taken a strong stance on LGBTQ+ rights over the season. How important or how meaningful is it to see that in motorsport?

“Of course it’s great for someone with Sebastian’s influence is standing up and reaching out, and the same goes for the team. The team are saying of the same view as Seb, that everybody deserves to be happy regardless of their sexuality or gender.

“So, yeah, I think for them to be using their power to influence people and try and make a stand is amazing, really, especially for Seb.

“He’s a single person. He has a lot of influence, I really don’t think Seb himself understands how much of an influence he does have on people. They have been the driving force behind that in motorsport, which is amazing.”

RF: What will your at Aston Martin over the rest of 2021 involve? You mentioned earlier you’d be in the simulator, which wasn’t quite nailed on when you joined?

Hawkins: “I will be using the sim and, obviously, I’m a racing driver, so my goal would be to drive the car, but I’m not under any illusion that is likely to happen or might happen. But equally, I would also say never say never, because the opportunity may arise and of course, I will jump on it if it does.”

RF: As a stunt driver, if they need someone to do donuts at a live event…

Hawkins: “I said this: I’ve said if you have any doughnuts, I’m your woman!”

Browse all other motorsport articles

7 comments on “Q&A: Jessica Hawkins on going from stunt driver to F1 simulator”