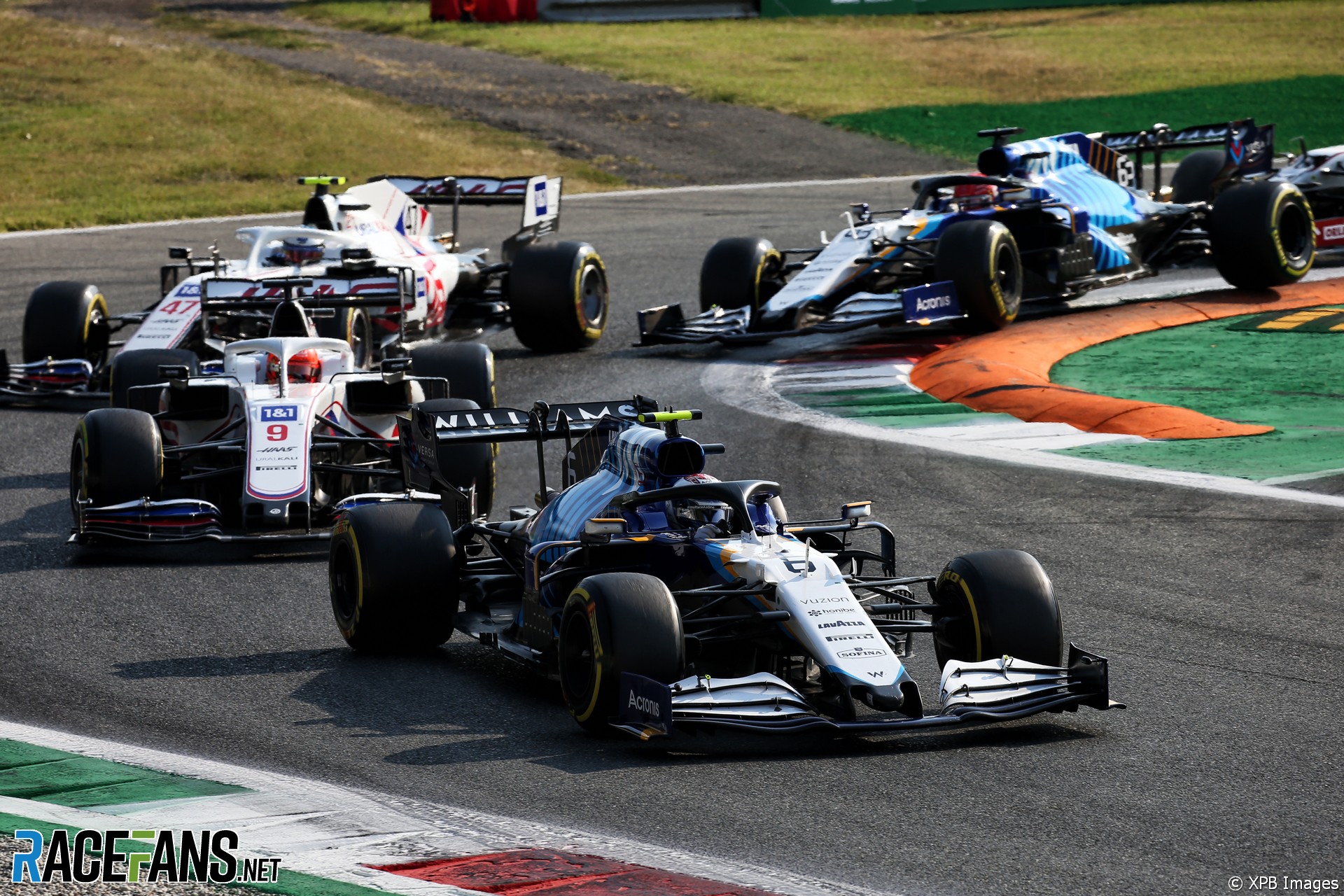 In the round-up: George Russell says he has “a lot of respect” for team mate Nicholas Latifi’s progress in F1.

Latifi getting “stronger and stronger” – Russell

Russell praised team mate Nicholas Latifi, who ran ahead of him early in the Italian Grand Prix, saying he deserved his recently-announced contract extension.

“Nicky was doing an extraordinary job, he deserved to be in the points,” said Russell. “He’s really getting stronger and stronger, week-in, week-out, finding a lot of confidence and he’s really doing a good job.

“He retained his seat on absolute merit this year. So I’ve got a lot of respect for how he’s working and how he’s going about his business, trying to improve. And as I said, he is truly doing a very good job.”

Stroll given warning by stewards for ignoring yellow flags

Lance Stroll has been issued a formal warning for an incident during the Italian Grand Prix where he did not slow sufficiently under yellow flags.

While ignoring yellow flags tends to result in an automatic penalty, the stewards showed leniency towards Stroll, acknowledging the flags were not easy to see.

“The stewards were able to determine that the driver slowed as required in the regulation, however could have done so earlier. The stewards therefore issue a warning.”

Reigning Formula 2 champion Mick Schumacher isn’t a fan of the new calendar format the series has adopted this year.

Having previously run double-header events, the series has switched to double-header rounds. It is also holding fewer events, with longer gaps between them, making for an uneven schedule.

“I haven’t really paid much thought to it,” Schumacher said when asked about the arrangement. “To be honest, I’m in Formula 1 and I’m happy to be not much looking back. But, let’s say, if Formula 1 had that kind of calendar, I think I wouldn’t be happy with it.”

However he added the arrangement is probably “more logistically and financially better for Formula 2 that way.”

Formula 2 points leader Oscar Piastri isn’t only concerned by the threat from Guanyu Zhou in the championship fight. The F2 feature race winner leads Zhou by 15 points but Piastri says “it’s definitely not a two-horse race.”

The next-closest rival to the pair is Robert Shwartzman, 36 points back from Zhou. “I think if you’re still within 50 points of the lead then you can have a really good weekend or the guys at the front can have a really bad weekend and all of sudden you’re well and truly back in the mix,” said Piastri.

“We’ve got three rounds to go, which is still over a quarter of the season, so it’s definitely not a two-horse race.”

Nothing to suggest our presence was necessary – if Lewis’ radio comms or behaviour on video feed would have hinted at injury, we’d have gone. He was clearly trying to drive the car, and Max’s car was not blocking his egress from the cockpit. https://t.co/VSRCu2mRwG

Just watched the @F1 race and so cool to see @danielricciardo back on the top step of the podium !!!! Congrats my friend

IndyCar fans unfortunately we are having technical problems at @SkySportsF1 HQ so you will not be coming to me during the US ad breaks as per usual. The feed will be running clean from NBC 👍🏼 #SkyIndycar #INDYCAR #PortlandGP

"Verschoor has been disqualified from today’s Feature Race results after it was found that the combined weight of his MP Motorsport car, including the driver wearing his complete racing apparel, was below the minimum weight specified in Article 5.a of the Technical Regulations."

"Tim Crow, a sports marketing consultant who advised Coca-Cola on football sponsorship for two decades, said: 'I haven’t had this many calls from clients, major brands, who are interested in her since Lewis Hamilton broke through in Formula One. If she wins she will become one of the hottest properties in British sport, if not the hottest.'"

"Malukas (HMD Motorsports) and Lundqvist (Global Racing Group with HMD) started on the front row and battled in the opening stages. Lundqvist was the only frontrunner starting the race on new tyres. As the duo came onto lap two, they were squabbling between themselves at the tight first turn, allowing Kirkwood to cut outside of both through the second corner for the lead."

If F1 wants the sprint qualifying race to generate more engagement, it needs to add to the weekend without affecting the qualifying order of the grand prix, says CallMeACynic:

If we have to have an ‘event’ on all of Friday, Saturday and Sunday at the so called ‘Grand Slam Weekends’ then I think the only thing I’d be comfortable with is traditional qualifying on Friday, a reverse sprint on Saturday based on championship order in order and then the grand prix on Sunday with starting positions based on qualifying as they always have been.

Decoupling the sprint result from the grand prix is the best improvement they could make regardless of any other changes. I hate that Gasly is starting at the back after his qualifying performance on Friday.
@CallMeACynic

15 comments on “Latifi deserved to keep his Williams seat – Russell”