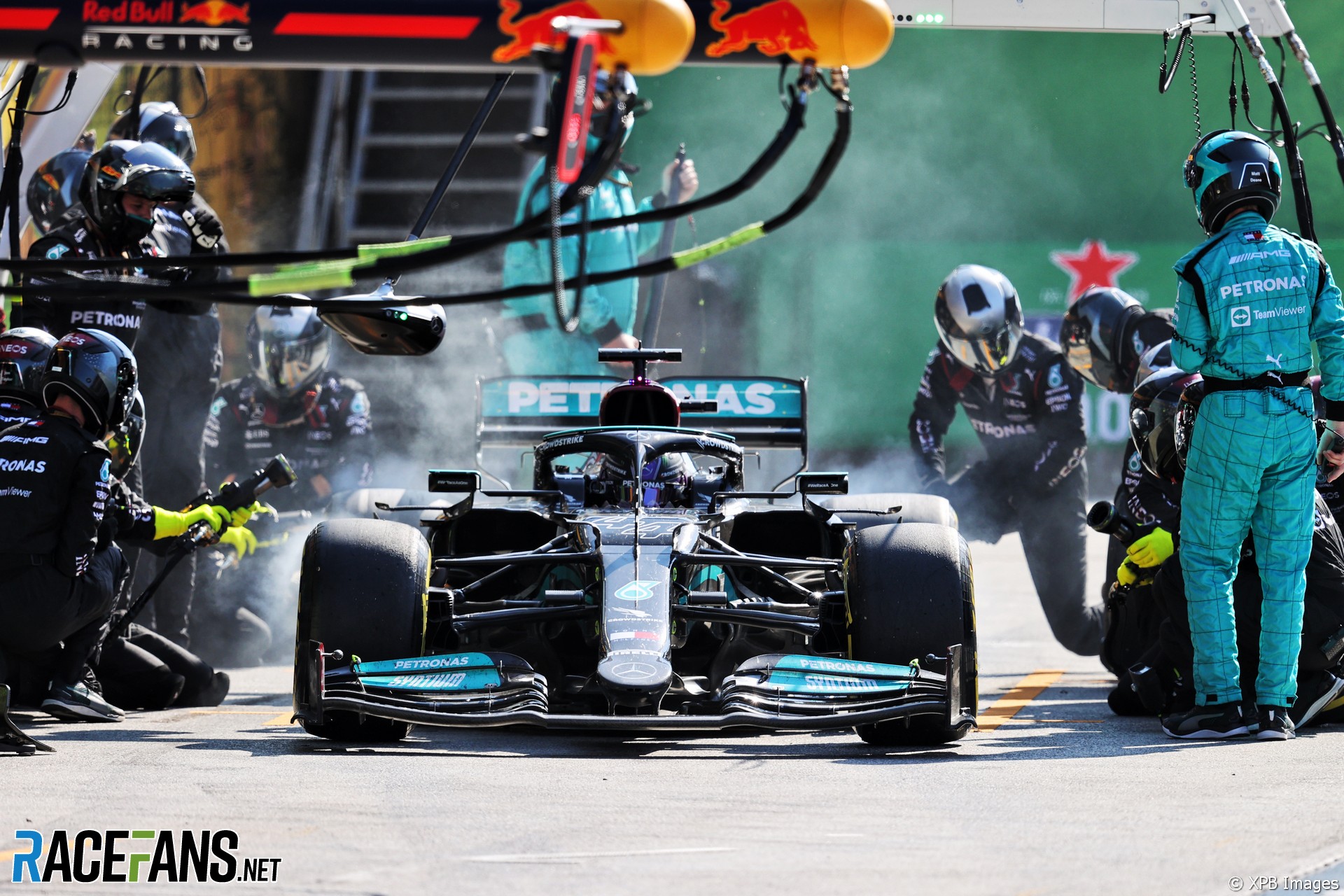 Lewis Hamilton started and finished second behind Max Verstappen, twice pitting before his rival in an attempt to jump ahead of him. However each time the Red Bull driver came out ahead.

Mercedes extended Valtteri Bottas’ first stint in an attempt to help Hamilton get on terms with the Red Bull driver, also to no avail.

Shovlin believes Red Bull’s pace advantage was too much for Mercedes to overcome on the day and opportunities for them to achieve a better result were limited.

“The opportunities are the normal ones like getting off the line,” he said. “If that had been better, then it at least puts you in the driving seat.

“Looking at the stops, the problem was Lewis was having to push very hard to close up. We certainly seemed a little bit stronger on that medium tyre and we could get that gap down a bit, and we’ll go through it as we always do. But I don’t think there was a point where you’d say we could have won.

“Also when you look at the gaps and when we were at our closest, it was too far for us to really run to the finish. But you’ve got to remember that Max has an element of management in his running and he can let those gaps shrink when you’re not at risk and grow them when when you are.

“We could see where he was pushing hard and I think in reality, there wasn’t any big opportunity that we let slip through our fingers.”

Mercedes could have been in a more competitive position had they got more out of their car during practice, Shovlin suspects.

“I think it goes back to arriving here in better shape with a set-up that’s working well, completing the programme, getting all our homework done, and when we’ve checked all those boxes we’re normally in a position to challenge them properly for the win,” he said.

While all drivers were compromised by the frequent red flags during practice, Hamilton missed virtually all of Friday’s second session after suffering a power unit failure. The team therefore moved some of their Friday job-list to Saturday, though that reduced the amount of preparation they could do for qualifying, in which Hamilton missed pole position by just 38 thousandths of a second.

“All we tried to do was put a bit of long-run work into Saturday because he hadn’t really done any long run,” said Shovlin. “Consequently, he’d also missed another opportunity to try that soft tyre that you can’t get back.

“But you’ve seen with all the red flags, it’s very difficult to run the sessions as planned. Even his session on Saturday was impacted. And even going into qualifying because we did the medium [in Q1] and then we were on cold tyres because of a red flag going into Q2, it was quite late before we actually had a run where it was hot tyres out of the box that were fresh.

“So we were just playing catch-up a bit and it was encouraging to see that we could get close – I know Max didn’t have a perfect lap. But this weekend we’ve been a little bit behind the curve and trying to catch up and we need to get everything right to beat them.”