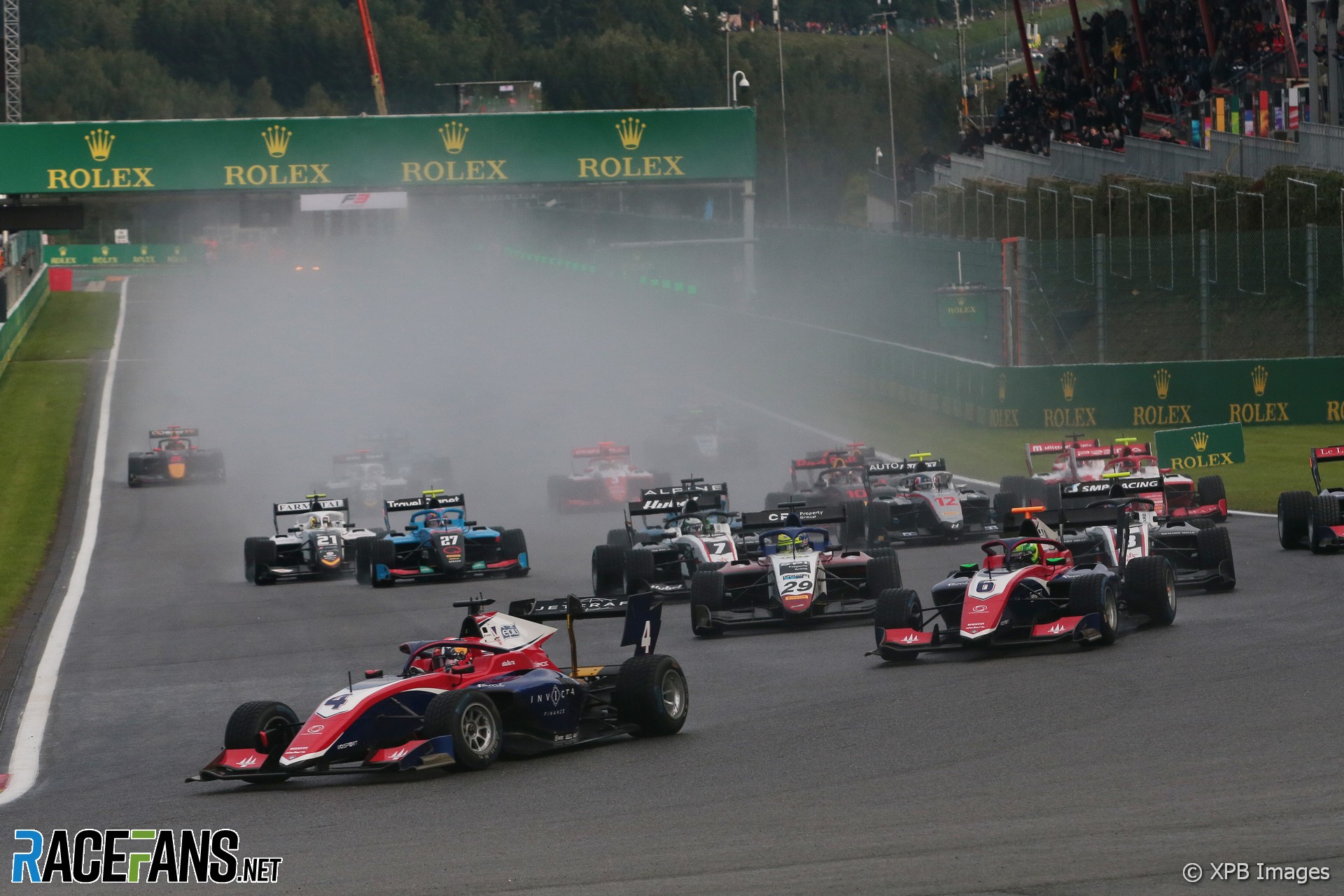 The Trident driver, who qualified on pole position for tomorrow’s race, also started the second event at Spa from the front having finished 12th this morning. David Schumacher, who had struggled in the second half of the earlier race, made it an all-Trident front row. Aleksandr Smolyar started third, with Caio Collet fourth, his earlier penalty promoting him up the grid for race two.

Following the W Series race conditions had improved sufficient for the race to get underway from a standing start – unlike this morning’s encounter – despite continuing wet conditions.

Shortly after the start Arthur Leclerc and Johnathan Hoggard clashed at Bruxelles, Hoggard being sent into a spin and ending up facing the wrong way on track. Leclerc found himself immediately under pressure from championship leader and Prema team mate Dennis Hauger, who set out in hot pursuit of Leclerc’s ninth place.

On lap 10 Nannini was sent into a spin near the pit lane entry, his car ending up stranded after contact with Laszlo Toth, prompting a Virtual Safety Car period.

Juan Manuel Correa asked if he could pit for slicks but ART told him that a lot of rain was expected in the remaining seven laps, as Nannini had been told earlier. Furthermore the pit entry was closed, due to the HWA car blocking it.

The interruption was prolonged as marshals experienced difficulty recovering Nannini’s car, during which time as the predicted rain arrived. A full Safety Car was subsequently called on lap 11 as the now wet Tarmac added to the marshal’s difficulties.

The Safety Car came in on lap 13, leaving four racing laps to the race distance but a risk of hitting the 40-minute time limit. It had wiped out the substantial lead Doohan enjoyed before the interruption, but he was able to make a good getaway, leaving Schumacher in the clutches of third-placed Logan Sargeant as the field set off again.

By now conditions had deteriorated to the point that the restart was held in the wettest conditions F3 had raced in all day, as darkness started to fall over Spa.

Hauger passed Leclerc through La Source, taking ninth place to try and extend his championship lead. However racing was then neutralised again due to a crash at Raidillon between Amaury Cordeel – who had already collected a five-second time penalty for repeated track limits violations – and Calan Williams. Cordeel’s car was stranded mid-track, Williams’ embedded front-first in the tyre wall.

It was a mercifully low-speed collision, Cordeel having already spun and Williams slowing before he hit the Campos as it ricocheted across the track. Both were able to get out of their cars, and Williams was helped into the Medical Car. The safety car was called, with two minutes remaining of the 40-minute maximum time.

“It’s really dark, are we going for a night stint, like in Le Mans?” asked Clement Novalak as cars continued to circulate behind the safety car, with a recovery vehicle being on track at Raidillon and rain continuing to fall, after the 40 minute limit had elapsed.

The race therefore ended behind the Safety Car, Doohan securing the win, Schumacher joining him for a Trident one-two finish and Sargeant rounding out the podium for Charouz. Hauger saw his points lead trimmed as he could only manage ninth behind Collet, Novalak, Frederik Vesti and Victor Martins. Arther Leclerc completed the top 10.