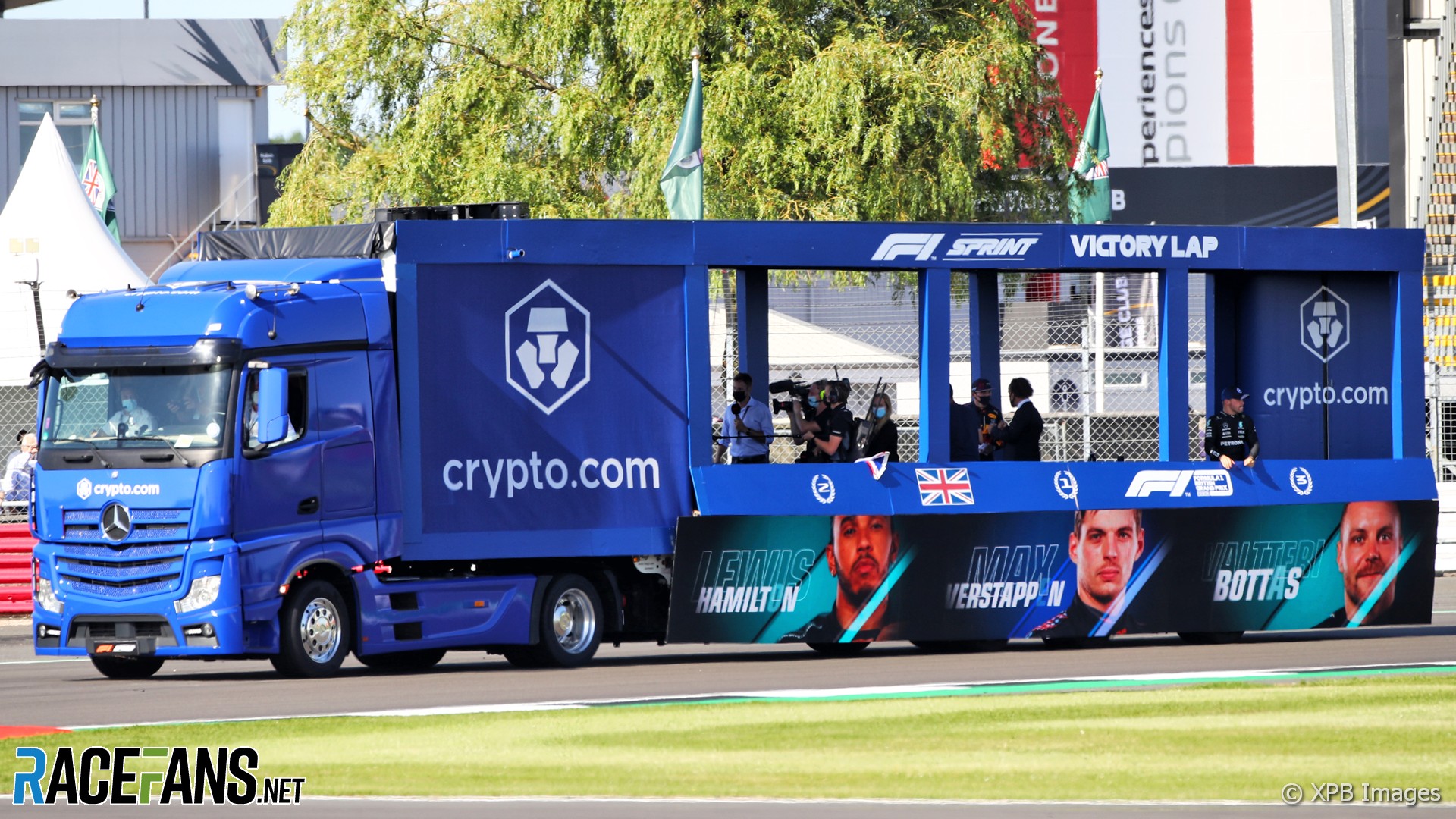 From F1’s new Sprint Qualifying events celebration truck to teams’ own partnerships, cryptocurrency has been a major growth area for sponsorship in the series. But it presents challenging questions for a sport eager to push its environmental credentials.

Unlike the conventional currency in your pocket which is tied to a country or resource, such as the gold standard, cryptocurrencies are universally accessible provided you have the technology. Users can ‘mine’ the currencies using computer processing power to sort through vast packages of encrypted data to find strings that form a coin. Although there are many different cryptocurrencies, they all work on that basis. If you can’t or don’t want to mine yourself, you can just buy in.

The processing capacity needed for the mining is staggering. Demand for chips is so high that it has lead to shortages of some computer parts and left gamers facing eye-watering prices for the latest graphics cards. But that isn’t the biggest objection to cryptocurrencies: the amount of power consumed in the mining process is the most serious problem.

BitCoin, the most popular cryptocurrency, is in a late stage of mining, meaning so many coins have been extracted from data that more and more blocks have to be processed to find one, limiting the currency and increasing the value of each coin. University of Cambridge researchers recently estimated BitCoin alone uses around 121 terawatt hours annually, the energy equivalent to a mid-sized developed country, exceeding the Netherlands, UAE or Argentina.

Assuming that 121 terawatt hours is drawn from a reasonably clean grid, like Germany’s, that’s roughly 58,685,000 metric tons of carbon per year, equivalent to 12.7 million passenger vehicles. That’s a lot to begin with, but in reality most BitCoin mining is done on fossil-fuelled grids where energy is much cheaper – and dirtier – than that. And while BitCoin is the most popular cryptocurrency, it’s just one of over 6,000 in use.

Given this, it might seem strange that cryptocurrencies first appeared in motorsport in environmentally-conscious Formula E. Techeetah partnered with gambling cryptocurrency DragonCoin (a sort of grown-up version of the token-based currencies at amusement parks) at the start of the 2017-18 season. Venturi went on to acquire Ethereum, a theoretically more eco-minded form of crypto, as a sticker for several races at the start of 2018.

It has spread into other series since. IndyCar featured a prominent BitCoin-funded entry in the Indianapolis 500 this year and NASCAR has featured a Dogecoin-sponsored car. But by far the most high profile crypto partnerships have been in Formula 1; a series which promises to be carbon neutral by 2030.

Red Bull entered into a partnership with Futuro Coin during the 2020 season. F1’s own Crypto.com deal – reported to be worth $100 million over five years – came from a prior one with Aston Martin which led to the creation of what the team called ‘the first F1 NFTs’ (non-fungible tokens), another blockchain technology that goes hand-in-hand with crypto platforms.

Formula 1 is a financially consumptive sport and blockchain technologies are an expanding – and potentially huge – area for it to gain essential sponsorship funds. “It’s an evolving market and we certainly see new categories and technology is stepping up,” said Liberty Media CEO Greg Maffei recently.

“When we bought [F1] nearly five years ago, I don’t think we thought about a crypto sponsorship. I don’t think that was really on our horizon. And now it’s a meaningful number.”

There is a contradiction here, and not just with F1’s carbon neutral target. Teams such as McLaren have been given the maximum three-star certification by the FIA’s sustainability programme, yet have partnered with both a cryptocurrency exchange (Bitci) and an NFT scheme (Tezos) – both blockchain technologies criticised for their poor environmental credentials.

Not that McLaren are the only ones. Formula 1 have their own NFT-based “game” called Delta Time, which uses cryptocurrency Ethereum’s blockchain technology (the data-burying process that creates mineable ‘blocks’) and both Aston Martin and Alfa Romeo have released their own tokens via Socios’ platform.

F1 teams already use huge amounts of computer power and high-speed processing is essential to the sport, from simulation to mid-race diagnostics. In some ways, crypto is as natural a partnership for them as oil producers are, and just as problematic from an environmental point of view.

The Intergovernmental Panel on Climate Change published a report this month which bluntly stated the earth is going to go through at least 1.5C of heating up for the next 79 years. The hundreds of climate scientists involved in the report say this is “unequivocally” caused by human activity. Keep in mind this is a best case scenario assuming ambitious emissions targets to hit net zero and then immediately begin reclaiming greenhouse gases from the atmosphere by 2050 are met. Every other outcome, with delays to net zero, is worse.

As F1 has pointed out, its carbon footprint pales in comparison to, for instance, major football events; in 2019 it generated 282,800 tons of CO2 emissions, compared to 2.4 million tons for the 2018 FIFA World Cup. However, the visuals of motorsport – and the automotive brands involved – will always be linked to transformations in the transport industry. Scandals like ‘dieselgate’, where multiple manufacturers deliberately disguised nitrous oxide emissions from diesel engines, mean there’s always broad cynicism about any claims for green credentials when it comes to cars.

Arguably, F1 striking a prominent race-branding deal with Crypto.com is not as contradictory as the one with Saudi Aramco, reputedly the world’s largest polluter. And oil money and Formula 1 have gone hand-in-hand for a long time. But the arrival of cryptocurrency in the sport – and its demands for electricity and economic resources across the world – is new, and shouldn’t pass without scrutiny.

112 comments on “Is cryptocurrency sponsorship too dirty for the greener image F1 wants to cultivate?”