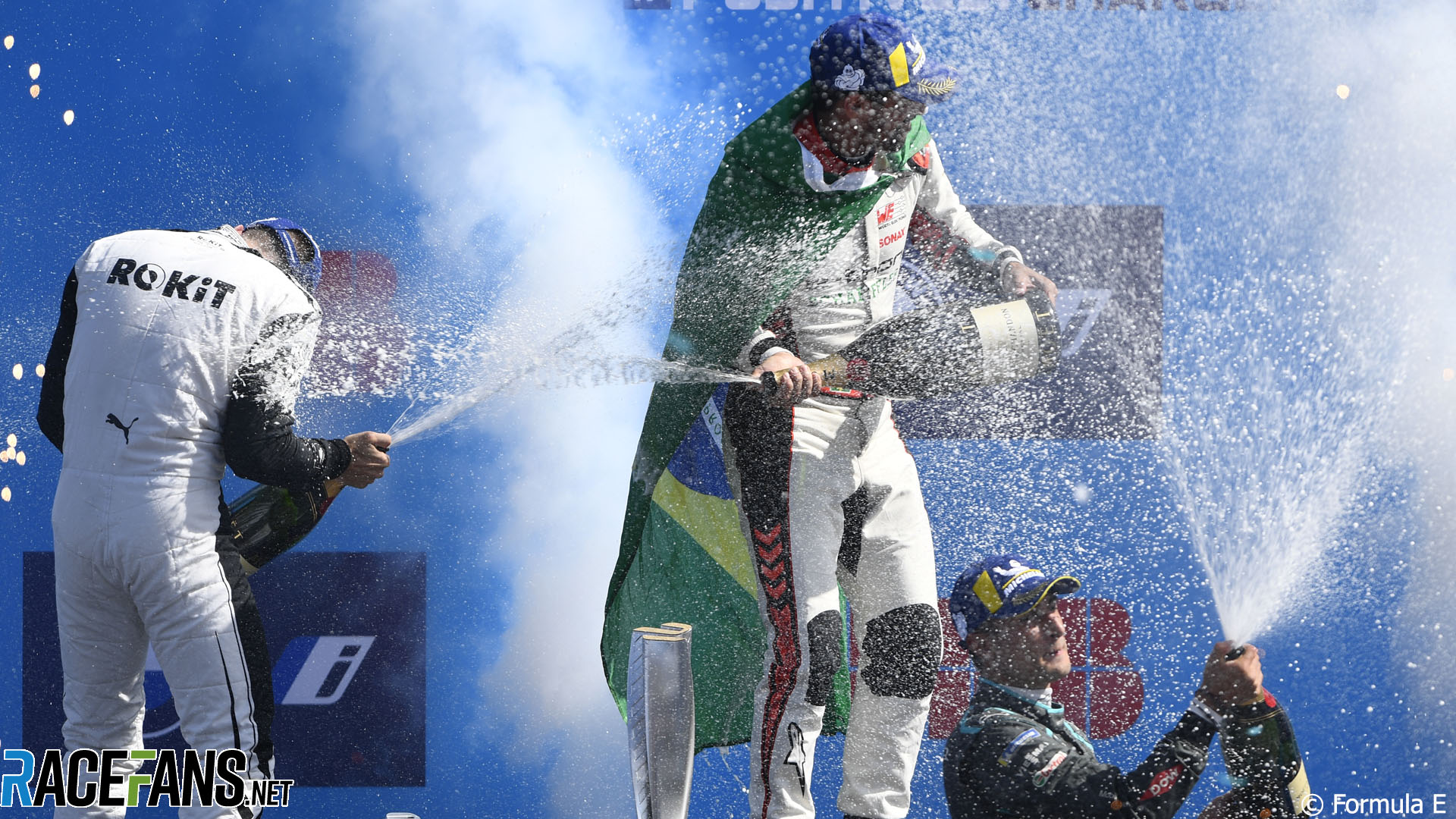 Fourteen drivers are still in contention to take the first world championship trophies in Formula E, ahead of tomorrow’s Berlin finale.

After qualifying, when DS Techeetah had locked out a confident-looking front row, it might have looked like things were set to play out in 2021 as they did in 2020, with Da Costa running away with the title around Tempelhof.

However, both Techeetah cars faded in today’s race and the title is now closer than ever, Nyck de Vries’ lead cut to just 3 points and with the top seven drivers all within 10 points of each other.

Jake Dennis moved up to third in the standings with a strong fifth-place finish and is now only four points behind De Vries overall. He described the race as “overall pretty good” saying that “We obviously had a tough first lap, ended up tenth and then got back to fifth and scored some valuable points. Those 10 points are really crucial to us right now and we moved up in the championship, which is great. And yeah, the car was behaving well and we look in good shape for tomorrow. So I’m excited. It’s all good. It’s been a good day in the office.”

Dennis is a rookie this season in Formula E but has managed to take two wins – more than any other rookie in the championship ever. Now in such close contention for the title he said tomorrow’s reversed-layout race would be another challenge. “I am confident but obviously it’s, again, another new circuit for me so I’ve got to learn it, which isn’t ideal but I’ll just move on from it. And I’m so excited to get the race going. No pressure, I’m just going to have some fun out there and see how we end up.”

Nyck de Vries was lucky to maintain his title lead, after finishing the race dead last. He had qualified poorly, starting the race 19th and then ending up having to pit mid-race due to a puncture. He said keeping the points lead by such a narrow margin didn’t count for much, ahead of tomorrow’s round. “Ultimately, I think the position doesn’t really matter anything now because everyone is so close that whoever is going to have a good day tomorrow will be crowned as champion, that is the reality.

“How I feel – of course I’m disappointed because we didn’t manage to score any points. We compromised ourselves in qualifying, started from the back of the grid and then you’re in the mess and anything can happen. What can I say, it is the way it is and now, we have to look forward and hope for a clean day tomorrow.”

Mitch Evans took third place for Jaguar, putting the team back in the lead of the constructors’ title but again by a very narrow margin, just five points ahead of Techeetah. Evans said “It’s a good result but tomorrow’s the one that counts.

“It’s going to swing up and down every lap, probably, tomorrow. So to be honest we need to capitalise on a big day; Sam [Bird] is, I think, back in group two so we’ve got scope to have another good day, but it’s 24 hours from now when it counts. But nonetheless, we’ll trudge on, tune her up, hopefully get some more pace out of it and then go again.”

Lucas di Grassi was able to capitalise on qualifying third place today to take the race win as Techeetah’s pace failed. He goes into the final round sixth in the points, only eight behind De Vries, having come into this weekend with relatively distant chances.

“We’ve had such up and downs this year,” Di Grassi summarised. “It’s been the year that I lost most of my wins – we lost two wins, one when the driveshaft broke in the last laps of Rome, it was a very good race and then the other a little bit more dodgy but still, we lost because of a technicality of the pit stop in the garage.

“So with those 50 points it would be much easier than currently. But everybody in the paddock can say the same; up and downs – one had the energy run out in the race, for another the car stopped and so on. So it just proves that we’ve been competitive the whole season, we just didn’t put the stuff together.

“And by arriving now, winning the race and being sixth in the championship,a few points away from the lead coming to the last race. This is the best we could do. So I’m very happy because we achieved today what we could and then we go for tomorrow with the same mindset.”