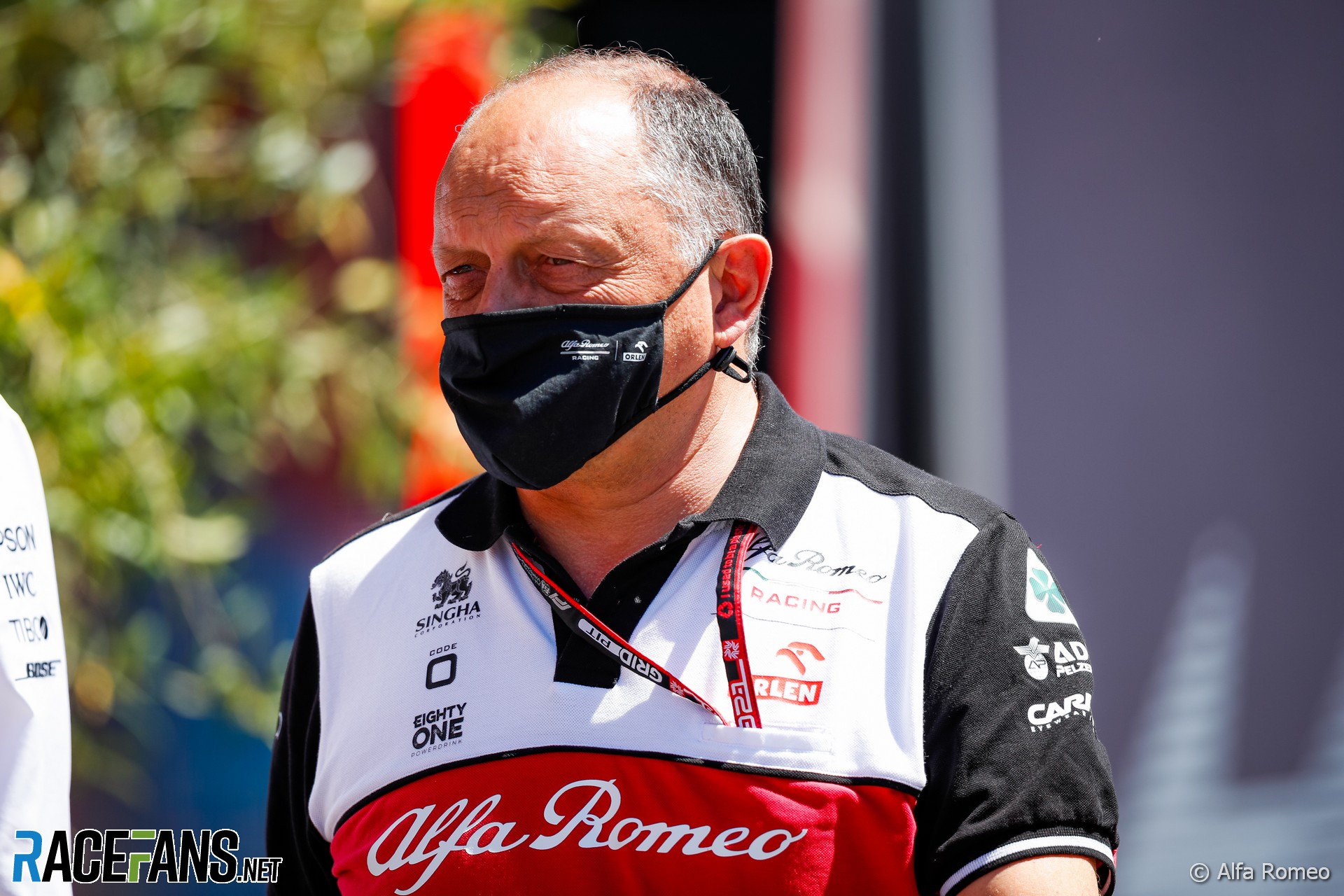 The opening races of the 2021 F1 season have been a mixed bag for Alfa Romeo.

The team has made clear progress in terms of its outright performance, but doesn’t have the results to show for it yet. Nine races in they have two points on the board – two less than they managed over the same run at the start of last season.

“It’s a bit of a mixed feeling,” team principal Frederic Vasseur admits in an exclusive interview for RaceFans at the Red Bull Ring. He says the team has made “a huge step forward” in performance.

“Today we are one percent off the fastest. Last year, we are two percent. It’s like this from the beginning of the season.”

This isn’t solely down to the obvious gains power unit supplier Ferrari has made during the off-season, he stresses. “Part of the job is coming from the PU, for sure. But I think also on the chassis side we made a good job.”

For all this, results have been frustratingly slow to materialise. The two C41s occupied the first places outside the points at the first race in Bahrain. Worse followed in Imola, where Kimi Raikkonen finished ninth on the road but collected a 30-second time penalty for violating a rule which even the stewards admitted was somewhat contradictory.

Since then Raikkonen and team mate Antonio Giovinazzi have collected a point each. Yet it’s clear Vasseur feels their efforts have been under-rewarded so far, and the team is well-placed to capitalise on a day when the leaders hit trouble.

“Now with the circumstances we struggle to score points,” he says. “You have zero DNFs from the beginning and even when you start P12, P13, you finish P11. But we have to do the job to continue like this, and it will happen that we’ll have more chaotic races and we are not so far away off the Q3.”

The team is in its third season with the same driver line-up and Vasseur is pleased with his pair, particularly the gains Giovinazzi is making with experience. He has only started behind Raikkonen twice this year, Vasseur points out, “when he crashed in Baku and when he was blocked by Mazepin in Imola.

“He’s improving, the pace is going up, but we always want to get more and I’m always pushing them. It’s my job.”

“I think one of the issues of Antonio so far was he was far too much into the comparisons with Kimi,” Vasseur adds. “Now he’s able to take the lead on some of decisions and say, ‘okay, I want to do this’. And for him, it was a step.”

While Raikkonen has not quite been on his team mate’s pace in qualifying, Vasseur has high praise for the 2007 champion’s Sunday performances.

“You know Kimi perfectly, he has huge experience and he’s doing a fantastic job in the race to manage the situation. He’s always able to do the perfect job in the management.”

Alfa Romeo has comfortably out-scored closest rivals Haas and Williams over the last two seasons. But the latter signalled in the previous two races it may become more of a threat in the second half of the year.

Vasseur’s team has faced the unwanted complication of being caught up in the row over ‘flexing’ rear wings – collateral damage in the fight between the championship leaders. The FIA introduced a tougher new test on rear wing flexing after the Azerbaijan Grand Prix, and the Alfa Romeo boss made his frustration with the development clear.

“I’m not a big fan of the change in the course of the season because we were sticking to the rules clearly,” he explains.

“We went to the scrutineering 10 times, it was always okay, we were under the maximum deformation. And they changed the load. They changed the by 50 percent.

Knee-jerk changes to the rules are “a mistake”, he insists, drawing a comparison with Brawn GP’s famous ‘double diffuser’, which it raced to championship victory in 2009 despite complaints from rival teams.

“When Brawn GP was champion, they didn’t change the regulation the first Monday.”