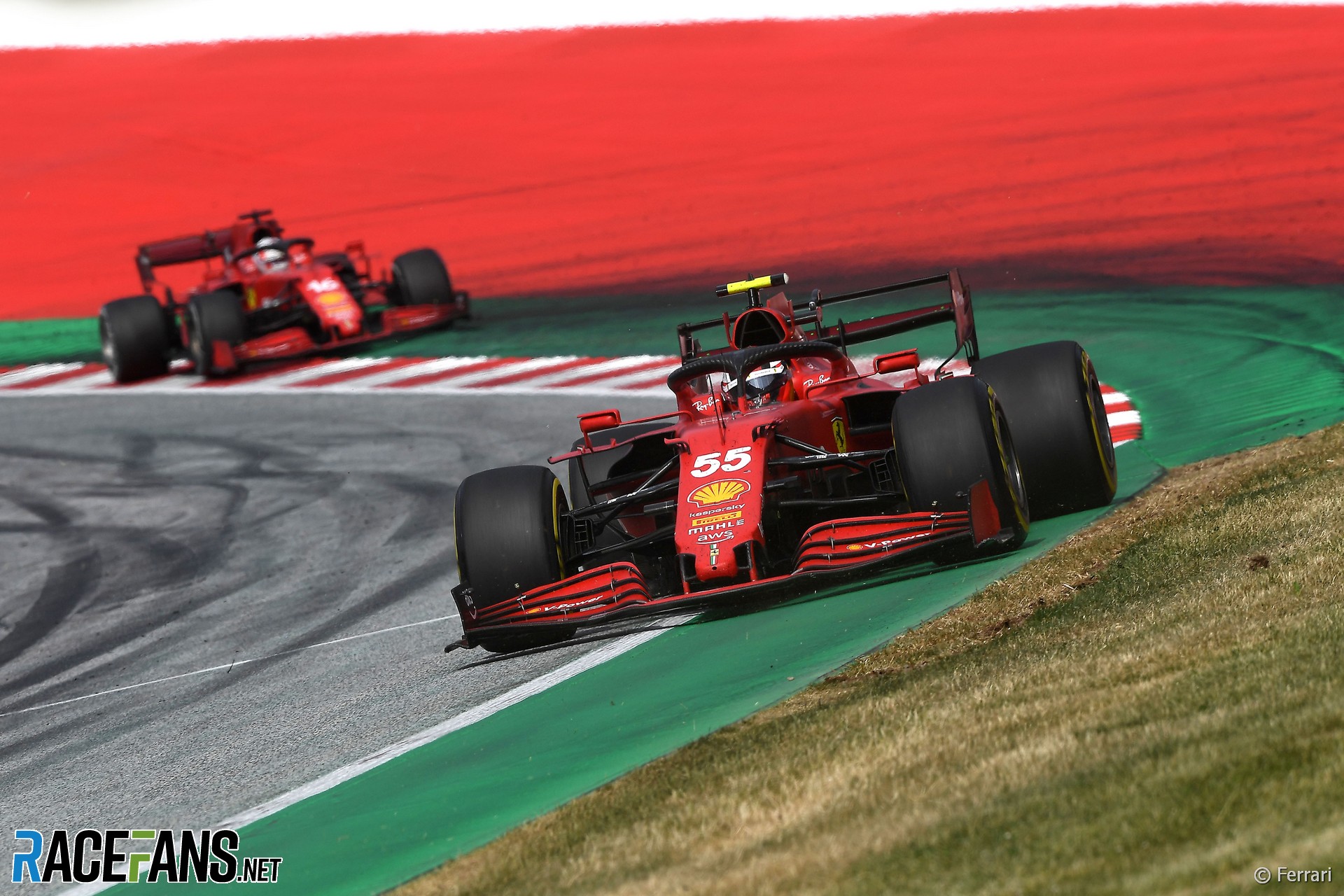 Each time one of the drivers who has changed teams for 2021 is asked whether they have fully adapted to their new car, their answer is often that it’s a situation to be judged in a few races’ times.

But nine races into the season it’s pretty clear Carlos Sainz Jnr is well at home in his Ferrari.

In the Austrian Grand Prix he finished ahead of his team mate Charles Leclerc. Granted, the pair had been told to switch places, but this was a consequence of Sainz’s pace advantage late in the race.

After qualifying 11th, Sainz was moved up a spot on the grid by a penalty for Sebastian Vettel. However he dropped to 14th at the start as he lacked grip on his hard compound tyres and it took him 14 laps, and pit stops for three drivers ahead, to recover the lost places.

Extending his first stint to lap 55 of 71 enabled him to climb another five places, and he only lost three of those when he made his pit stop.

After that he was able to let rip. Once past Leclerc, he caught and passed McLaren’s Daniel Ricciardo, and got close enough to Sergio Perez to claim fifth place after the Red Bull driver’s penalty.

“It’s been a good race,” said Sainz, though he admitted “the start was very, very difficult.

“I wasn’t expecting to struggle as much as I did with the hard tyre. Maybe the cooler temps today or something made the hard a bit more difficult in the initial laps.”

It takes longer to bring the hard tyre up to temperature than the softer compounds, so it was no surprise Sainz was slower at the start than his opposition, and in the end he took those tyres longer into the race than anyone else could on any of the compounds.

“After that, I managed to pull together a strong stint to go long on the hard and put the medium on at the end, to be able to attack,” he added.

“That stint was fun, I’m not going to lie. Always when you are on the hunt and when you are chasing, it’s always good fun. I managed to pull out a couple of quick moves, especially also thanks to Charles that he let me by to go on attack Ricciardo, and we managed to make it stick and get a couple of extra points.”

The problems Sainz encountered with his car were not unique to him. Leclerc gave similar feedback about this recognised car trait. Sainz knew exactly what was causing his balance problem, corresponding with his pre-race remarks that lower temperatures “normally exposes you more to front graining”, but also “means more grip at the rear, which could help our car balance and go the right way if there is no front graining”.

Front tyre graining limited Ferrari so much at the French Grand Prix that both cars failed to score points. In the Styrian Grand Prix – also held at the Red Bull Ring – the team struggled for pace in qualifying and Sainz was 12th on the grid. But he made his way to sixth place, in a race that also included unlapping himself against Mercedes’ Lewis Hamilton.

The second Austrian weekend always looked likely to be a more challenging one for Ferrari, as their front-end limitation was exacerbated by the softer tyre selection. But Sainz wasn’t knocked off his stride.

“The pace was strong,” he said. “My confidence with the car was maybe not as good as last week because we were struggling a bit more with balance and temperatures. But overall, a nice double-header here in Austria and nice to prepare for me, which gives me confidence going into the last two before summer.”

He is now two points behind Leclerc in the standings, and it marks his most competitive Formula 1 campaign yet when taking into account the first nine races of previous seasons. Their average finishing positions so far are 6.875 for Leclerc and 7.0 for Sainz, making them one of the most closely-matched team mate pairings on the grid too.