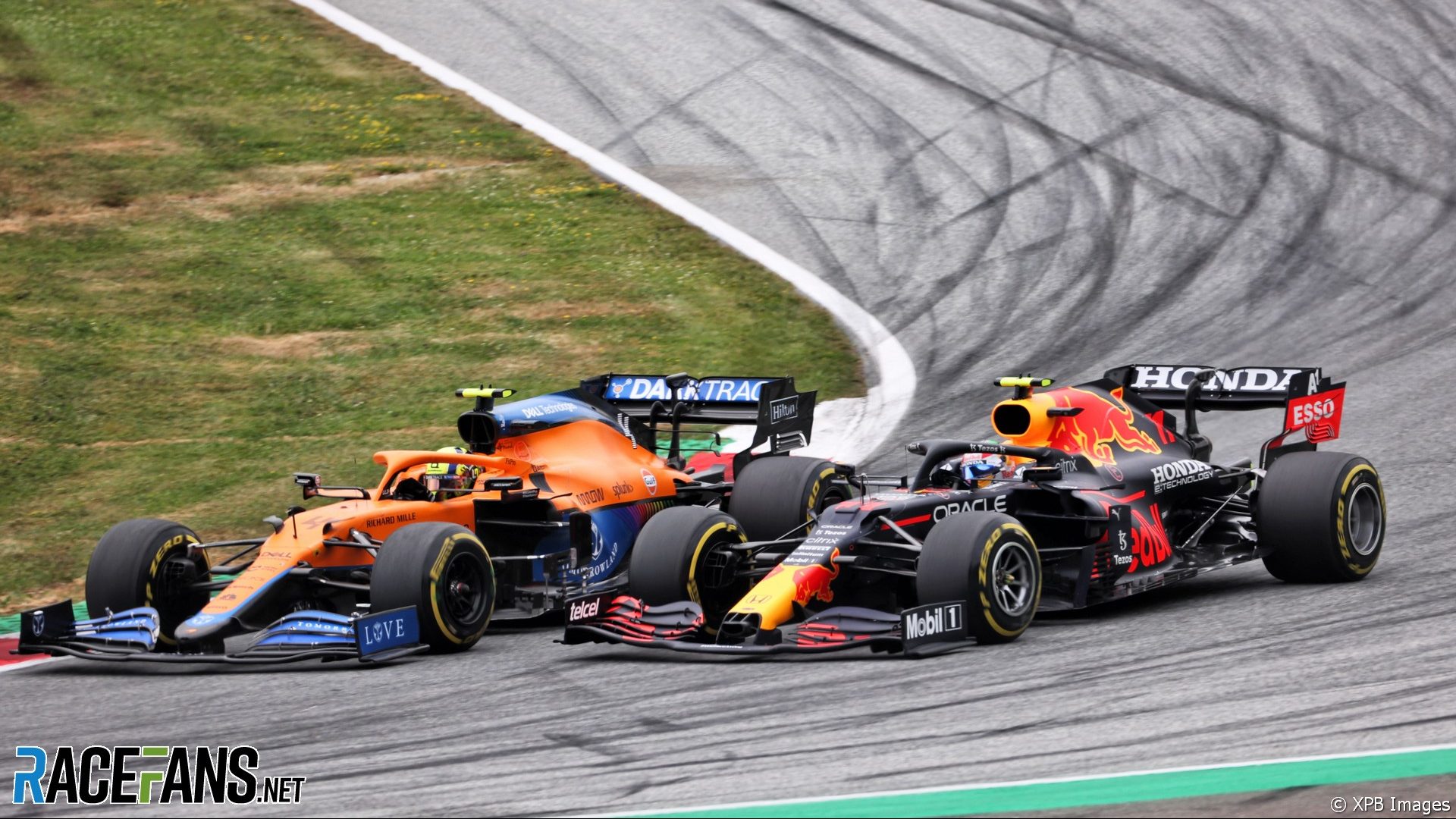 Criticism of the stewards’ decision to penalise Lando Norris over an incident with Sergio Perez came, unusually, from both sides.

Norris and his McLaren team principal Andreas Seidl were unsurprisingly unimpressed with the call. But Seidl’s opposite number at Red Bull, Christian Horner, also criticised the decision.

The stewards gave Norris a five-second time penalty after Perez went off at the outside of turn four while trying to overtake the McLaren. Perez received similar penalties himself later in the race for incidents involving Charles Leclerc at turns four and six.

The first incident happened on lap four of the race, following a Safety Car restart. Norris felt it should have been regarded as if it was the opening lap, as when Max Verstappen forced Lewis Hamilton wide in the Tamburello chicane at Imola three months ago, when the Red Bull driver avoided a penalty.

“From my point of view, I think if I were to compare it to anything, it’s the same as Max and Lewis in Imola,” said Norris. “Same thing as that.

“It’s lap one, or it’s a restart, and I think Sergio, maybe he doesn’t know there’s gravel on the exit of that corner and it’s downhill, it’s easy to run wide and it was just what happens.

“You watch Formula 2 or Formula 3 or any category and people who try to go around the outside there and don’t commit to it end up in the gravel. That’s just the way that corner runs.

“So he took the risk and not me. He didn’t commit to his overtake the way he should have done and he put himself in the gravel. So I don’t feel it was my mistake but I don’t make the penalties.”

Decisions on incidents are taken by the stewards rather than the race director. Nonetheless Masi gave insight into why the Imola incident was considered differently, pointing out it occured at the first corner on the first lap of the race.

“All lap one incidents are treated in a more lenient manner and that has been the case for a number of years under the ‘let them race’ principle, let’s call it,” he said.

There exists considerable precedent for how similar incidents have been treated in the past. A convention was established where a leading driver on the inside of a corner wasn’t obliged to leave room for a rival on the outside at the exit unless that rival had got ahead of them.

In Masi’s view, Perez had done this, and therefore Norris was required to leave room for him. “In Sergio’s one with Lando, he was wholly alongside Lando and therefore there is an onus to leave a car’s width to the edge of the track,” he explained.

Horner did not agree, and saw the incident in much the same way as Norris. “I was okay with the incident between Checo and Lando, that’s racing,” he said. “You go around the outside, you take the risk. Particularly when you’re not in a position that you’re ahead.”

He felt the penalty for Norris left the stewards no option other than to give the same sanction to Perez for his incidents with Leclerc.

“The FIA, having awarded that penalty, then couldn’t not award a penalty for a very similar move with Charles. But these guys have raced karting from when they were kids and you know, it happens.

“You know if you go around the outside, you take the risk particularly if you’re not ahead. So I think the penalties were a bit harsh and it sort of does slightly go against the ‘let them race’ mantra that we’ve been championing in recent years.”

Norris’ team principal Andreas Seidl also felt Perez hadn’t drawn sufficiently alongside Norris to have earned the right to the line on the outside of the corner.

“I don’t understand why he got a penalty there,” said Seidl. “That is, for me, racing that we all want to see and I don’t think that Lando did anything wrong.

“It was, in addition, at the beginning of the race where everyone needs to settle in first. He was just going on his racing line. He didn’t do anything stupid and do some dive bombing or whatever. He was always parallel to him or even slightly ahead of Checo. So honestly, I don’t understand.”

Seidl felt the driver steward, who at this weekend’s race was ex-Formula 1 driver Derek Warwick, should have brought a useful perspective into this particular incident.

“I also don’t understand why, for example, the driver steward doesn’t bring more across there, what’s actually going on there in this first race lap for a race driver. It will be interesting what we hear from Michael on this.”

Following the Azerbaijan Grand Prix, where Norris criticised a grid penalty he was given for a red flag infringement, Masi said the driver had violated a rule known by “a six-year-old who’s in their first karting event.” Seidl pointedly chose a similar phrase to express his dissatisfaction on Sunday.

“I would say, to speak in Michael’s words, every go-kart driver knows that if you go there to the outside, the first race lap, you will end up in the gravel. But you can’t complain about the guy that was on the racing line.”