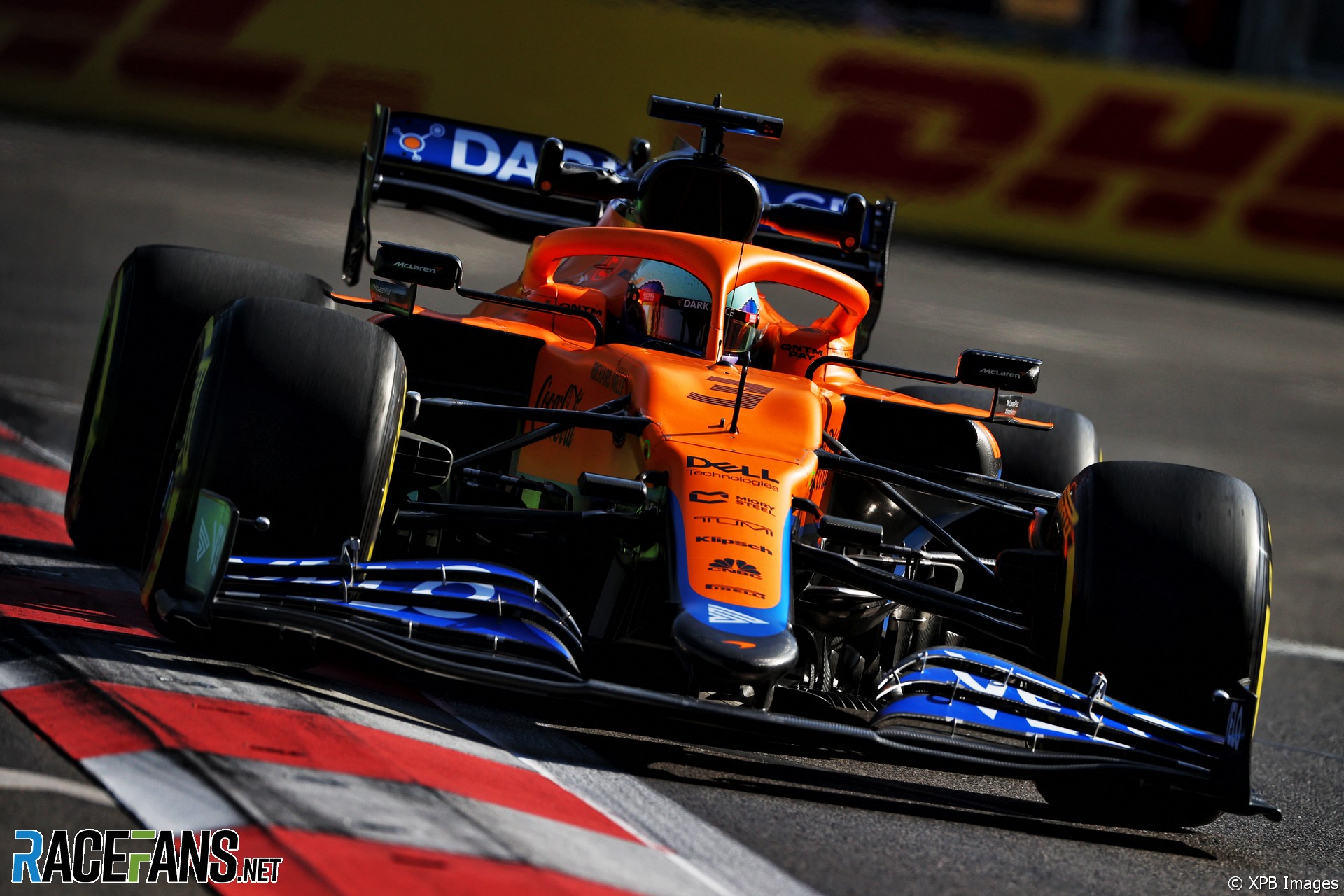 In the round-up: Daniel Ricciardo says the work he did with McLaren following the Monaco Grand Prix is showing in his improved performance in Azerbaijan.

Ricciardo, who finished outside the points for the first time this season at the Monaco Grand Prix, said the work he had done with McLaren since the race was showing in his improved pace at the Azerbaijan Grand Prix.

“I did quite a bit of work from Monaco into this race and spent a few days on the sim and I think the work has paid off,” he said.

Ricciardo had previously struggled getting his car turned into corners, saying he didn’t believe he could replicate what Norris had been doing at times. “I think the understanding of the car and the turning feels as expected and I’ve just got to now execute what I know I can do, just to put it all together.”

Asked to predict his qualifying position, Ricciardo joked: “Somewhere between first and 20th…”

Nico Rosberg, who won Azerbaijan’s first F1 race five years ago, has described the Baku pit lane entrance as one of the most dangerous sections of track calendar.

Speaking in a video track guide to the circuit, Rosberg described the high-speed approach to the pit lane as “quite scary” and “one of the places that I always found the most dangerous of the whole year”.

“You’re arriving down here now at 350kph, look what’s on the left,” he said, indicating the barrier which separates the track from the pit lane.

“Imagine something breaks on the car here – you’re at 350kph, on the left there, just four metres to your left, there’s a wall and it’s facing you. So if something breaks here, it’s the end, there’s no more you,” Rosberg continued.

“So it’s one of the most scary places that I’ve ever driven an F1 car in to go by there just feels ridiculously wrong. But anyway, you have to try and blend it out and keep going.”

Belgian and Dutch rounds firming up

Spa-Francorchamps was hit by a flood yesterday but the circuit is looking forward to being able to welcome fans to its round of the world championship on August 29th. The race promoters have confirmed up to 75,000 spectators will be able to attend. All must either be fully vaccinated against Covid-19 or have a negative PCR test up to 72 hours before arriving at the circuit.

Formula 1’s long-awaited return to Zandvoort will take place one week later. Contrary to recent reports, RaceFans understands the Dutch government is not requiring all F1 staff to have been vaccinated prior to the event.

Formula 2 grid changes due to penalties

Following Formula 2 qualifying in Baku, several drivers had penalties applied that changed the order at the rear of the grid for sprint race one.

Sprint race one uses the grid as determined by qualifying, with the top ten reversed. No drivers within that top ten were penalised, however Christian Lundgaard, Jack Aitken and Guilherme Samaia were in the lower section of the grid.

Lundgaard was penalised three grid places for impeding Guanyu Zhou, Aitken the same for impeding Lundgaard and Samaia again for impeding Bent Viscaal. All three were also awarded one penalty point against their license for the series. As a consequence, Lundgaard went from 12th to 15th, Aitken from 14th to 17th and Samaia from 20th to 21st due to a penalty for Marino Sato ahead of him and Roy Nissany’s pit lane start following crash damage, both of which occurred during the earlier practice session.

“Today was our worst Friday by some margin,” said Shovlin. “Our biggest issue seemed to be the single lap; we’re a long way from our normal positions so clearly we need to find something very significant there.

“The long run picture was not as bad – a fair bit behind Red Bull but still in the mix. So, lots to work on overnight; we’re planning a comprehensive programme of analysis and simulator work to try and understand some of these issues but we clearly have an awful lot to find.”

Lap of honour in memory of Sabine Schmitz. 🙏🏼

Today at 6:00pm CEST, @nuerburgring legend Johannes Scheid will do a lap around the #Nordschleife in the 1996 BMW M3 'Eifelblitz'.

Together with Sabine, he won the @24hNBR twice.

This one is for you, Sabine – never forgotten! 😢 pic.twitter.com/BhpEaeXT85

Penske noted he talks often with Stefano Domenicali, but "they needed to get the Miami thing done. We're interested but don't have any plans right now."

"He chuckles after I ask whether the two would go for a beer. 'Well, you know, we are different generations. But of course. Outside of the track we get on really well.'"

"Helio Castroneves delivered the victory — it was the record-tying fourth Indy 500 win for the Brazilian — in a part-time ride for the team. It was only during last year’s pandemic-plagued season that Shank finally had the manpower and resources to run Jack Harvey for a full IndyCar schedule and this year the team had some flexibility to go even bigger."

"Arden Motorsport have announced US racer David Morales will join their line-up for the remainder of the 2021 F4 British Championship certified by FIA – powered by Ford EcoBoost season. The 17-year-old joins the Red Arrows from the F4 NACAM Championship, in which Morales claimed a first podium finish last year and ran consistently up front in the series’ two recent non-championship rounds."

Although it’s extremely unlikely to happen – despite being Honda’s final year in the sport and also because it’s Honda’s final year in the sport, when it comes to Fuji – Ttongsul suggests a ‘Pacific’ Grand Prix rather than doubling up at Circuit of the Americas, to replace Singapore. Sadly, Japanese travel restrictions are so severe several Super Formula drivers are currently unable to compete but it’s an appealling suggestion for the calendar.

This would be a great time to have back to back races in Japan adding Fuji Speedway as a ‘Pacific’ GP, long straight would make great battles compared to the boring bleak dark 90 degree fest in Singapore.

Its a grade one track so its ready to race on also the track is in a similar time zone to Singapore so wont screw up scheduling and it is a welcome break from the million backup European races last year .

Extra bonus is that the Japanese attendance is always high and they are a courteous welcoming people so make the deal F1 and track owner Toyota!
@ccpbioweapon

Happy birthday to Ratboy and Davef1!

11 comments on “Ricciardo: Post-Monaco sim work paying off in Baku”