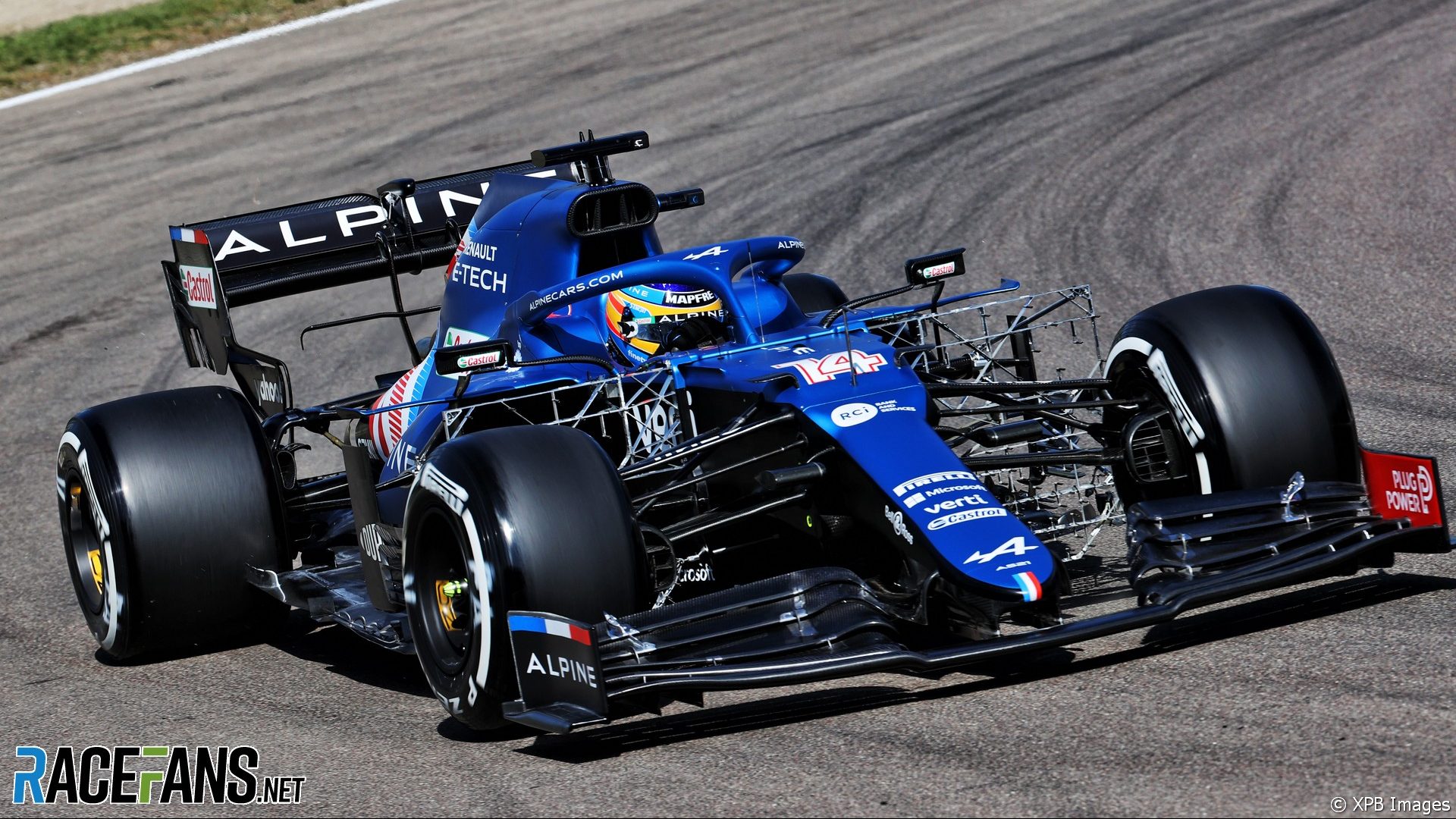 In the round-up: Formula 1 returnee Fernando Alonso got his first taste of Imola since 2006 in his Alpine-Renault A521 and it left a big smile on his face.

Fernando Alonso was excited for two very different reasons after he marked his first day in a racing car at Imola since 2006 by going 14th fastest time in Friday practice for the Emilia-Romagna Grand Prix.

“It was a fun day for sure,” said Alonso. “I think the circuit is amazing, and the modern Formula 1 cars [make it] very narrow, very fast. When you have cars around, it’s quite tricky and quite quite narrow to let the people go, to overtake the guys on the out lap, on the in-lap. So all that adrenaline is building up during the lap. It was a fun day.”

The two practice sessions were also the first appearance of aerodynamic parts that were being trialled with the option of using them in the race.

“Happy with the progress, all the new parts, they seem to work. We need to make further analysis, but we are quite optimistic that they make a step forward in terms of performance. So let’s see what we can do tomorrow.”

He also gave his predictions of how Alpine will fare in qualifying.

McLaren returned to using Mercedes-Benz engines in F1 at the start of 2021, and recently announced their relationship with the automotive brand and F1 rival now extends to the sharing of reserve drivers taken from Mercedes’ Formula E line-up.

On the eve of the Emilia-Romagna Grand Prix, McLaren then made the surprise admission that Mercedes’ former DTM driver and ex-F1 racer Paul di Resta is a driver it also has on call for if one of its usual drivers is unable to compete.

“My focus is on this agreement we have with Mercedes,” McLaren team principal Andreas Seidl said. “We have a good relationship also with Paul di Resta, who is also in possession of a superlicence, so we have an agreement with him as well in order to jump in if the requirement is there. So we are prepared for different scenarios.

In addition to winning the BRDC’s young driver award back in 2004 when it was backed by McLaren, di Resta also has links to the team having won sportscar titles with McLaren CEO Zak Brown’s United Autosports team.

The #ImolaGP timetable has been revised: A pre-race tribute will be held for late #MotoGP team boss and two-times 125cc motorcycling world champion Fausto Gresini, who died recently.

Qualifying for the supporting @FRregionalAlpine race has also moved from Saturday to Sunday. #F1 pic.twitter.com/mCjVR3Dok6

You can’t imagine how frustrated and gutted I am to share this news: after arriving in Italy, being careful and followed all the COVID-measurements, my test came out positive twice. That means I can’t make my debut for ART this weekend. pic.twitter.com/C9dZHcz2E8

Oh, it feels good to get those first sessions on the mic in the books. Most USF2000 and Indy Pro 2000 drivers skipped the official practice to save tires for quali and the races, but @IndyLights gave us our first look at the pecking order. It's going to be a great season. #Bookit

Imagine going to school right next to Imola! 🤯 Taking a trip down memory lane with VB's race engineer – Riki ❤ pic.twitter.com/tZZV02NDAI

Know it’s late in the day, but not too late to wish Sir Frank Williams a very happy 79th! His first in something like 50yrs without the worries of a pesky @f1 team! Enjoy it, Frank!

Verstappen said: “F1 needs a proper fight because for the last few years it has been a bit boring. On the Monday after the race, as a fan you really want to be looking forward to the next one, knowing that there are two, or even three teams fighting for that win.”.

Ford’s former group vice-president of global product development, has died in an accident on his farm in Wales. Ford chairman Bill Ford said that Parry-Jones “left an indelible mark on Ford and the industry“. Parry-Jones, who was 70, had a distinguished engineering career at Ford spanning nearly 40 years.

F1 rising star Yuki Tsunoda: ‘Every other driver is the enemy’ (The Guardian)

“Every driver is the same for me, they are the enemy. I don’t think about whether they are world champions or that it is an honour to race them, not when I am driving.”

Gabriele Mini topped a shortened second free practice session at Imola ahead of the first round of the Formula Regional European Championship by Alpine season. The 50-minute session was cut short when red flags were brought out in the final five minutes of the session after Nicola Marinangeli came to a stop.

After just missing out on the pole in the morning session, the HMD Motorsports sophomore could pip his teammate and race one pole winner Linus Lundqvist. Starting behind Malukas and Lundqvist are Andretti teammates Robert Megennis and Devlin DeFrancesco, who were within two-tenths of a second of the front row. Mirroring the other Road To Indy sessions, the final Indy Lights qualifying opportunity had a tight field with the top nine turning in laps within six-tenths of a second of the pole sitter.

F1 in Africa: The fast and the fragile (BBC)

F1 has not been to Africa since 1993, but before that there were a number of exciting and dramatic races held on the continent. This is the story of the second of those - the 1962 South African Grand Prix.

Does Otmar Szafnauer’s criticism of F1’s new rules show he knows the season is lost?

With the major design challenge of the 2022 car, Szafnauer already knows he can’t put enough resource into this season’s car to tackle the challenge. He knows he’s only going to stay where he is or drop further backwards in the midfield pecking order (got to assume at least McLaren and Ferrari will keep developing a little longer into the season, AlphaTauri is already ahead, and Alfa are also in the mix) for the rest of this season and is laying out his excuses early.

Papa Stroll has spent big on the team and the marketing, and he’s got a dog on his hands this year that he can’t fix.
@Badger74